Career Insights11
We know data science is a booming field, commanding top salaries in the United States and building massive demand here and...

We know data science is a booming field, commanding top salaries in the United States and building massive demand here and abroad. The downside? Not all business can afford an on-staff data scientist.

The truth is, not every business or organization has the need for a dedicated data scientist, and few can afford one. Many are turning to SaaS models to fill the void more affordably, but that doesn’t mean you’re out of a job just yet. You just need to know where to look.

[Related Article: 13 Best Cities On The Planet To Get Hired As A Data Scientist]

Industries hitting that sweet spot between needing a data scientist and being able to afford one are better places to look than your standard, generalized job search. Here are five key fields hiring data scientists to watch in 2019 and beyond.

Telecommunications is an estimated 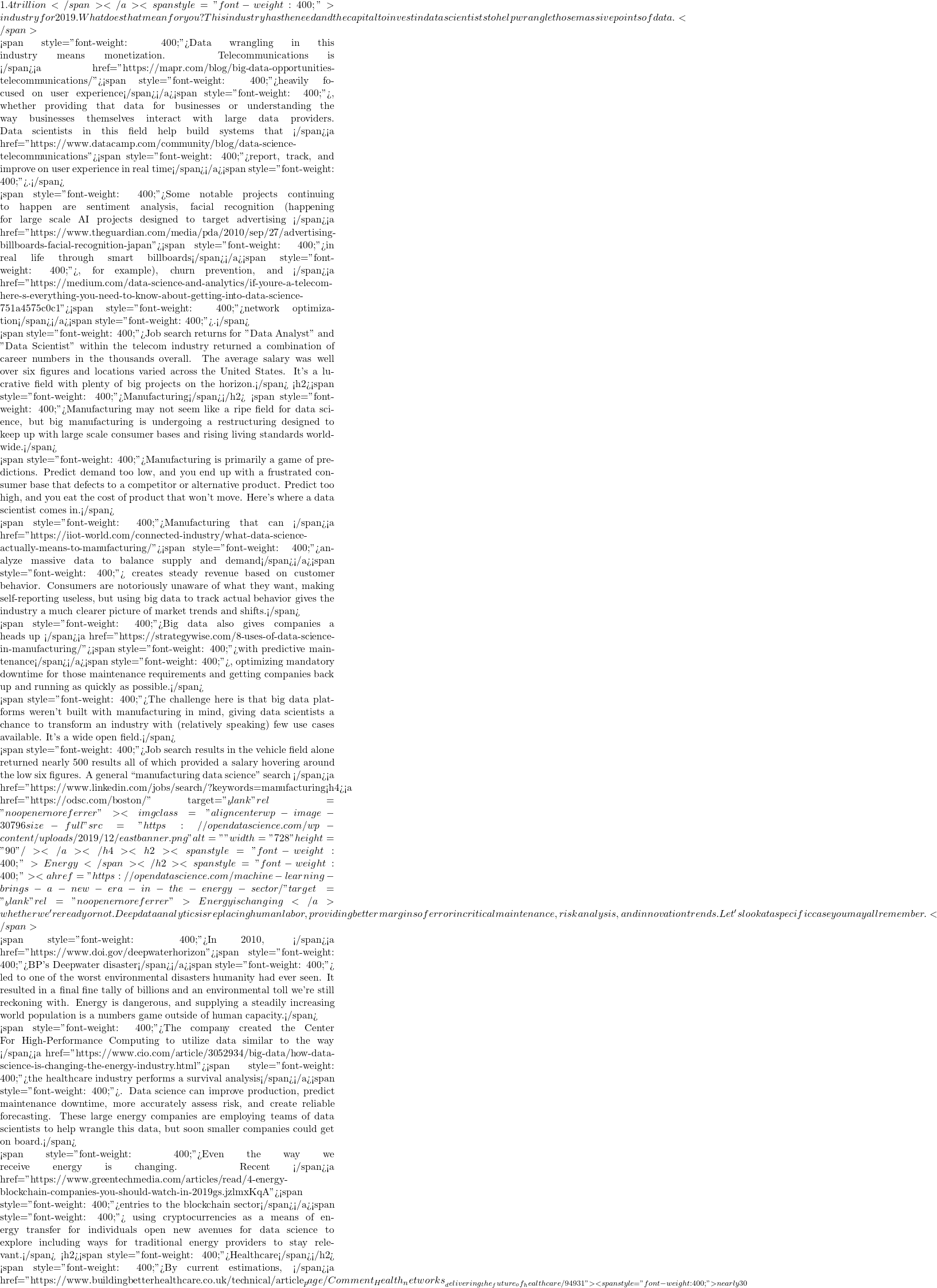 The healthcare industry is only just beginning to own this data. The laborious switch from paper systems happened relatively recently, and the industry itself still isn’t sure how that data should flow from the patient to doctor and back again.

The sheer amount of raw information has a lot of potential, but few players in this industry are actually using the data they store. Ethics concerns aside, as few as 10% of hospitals have robust warehousing capabilities with most hospitals scoring in the 2-3 out of 8 range of Health Catalyst’s Analytics Adoption Model.

Right now, the healthcare industry hasn’t hired enough talent to meet demand, but those numbers are rising. Considering the rise of health wearables, predictive diagnostics, and using big data on the research spectrum, this industry is ripe for a hiring explosion. This is already one of the biggest fields hiring data scientists and it will only continue to grow.

Finance employs about 10% of data scientists currently working in the field and with good reason. Big banks and financial institutions certainly have the cash flow to hire dedicated data scientists, and many of them are recognizing the relative value of that data.

Security is a primary concern, and accurate consumer predictions are the first step in preventing that fraud. Behavior is an illuminating indicator of fraud because consumers are so, well, predictable, and leveraging deviations in that prediction improves security in a world rife with security breaches.

Finance also needs data scientists in research and development. Cryptocurrencies and the blockchain are changing how consumers interact with traditional financial institutions, so if JP Morgan, for example, wants to be around in the next ten years, they have to stay ahead of development.

[Related Article: 3 Sought-After Data Science Skills to Get Hired in 2019]

The Imprint of Big Data

All of these industries have been irrevocably influenced by big data and harnessing it for monetization will separate who survives the coming changes and who grows more obsolete. Key players in these industries recognize this shift and understand that employing data scientists and not just relying on a hybrid SaaS model or a programmer with no data science experience isn’t going to cut it. Target these fields hiring data scientists, and you could find yourself looking at lucrative and secure employment for 2019 and beyond.