Earlier this month, another successful edition of the Open Data Science Conference occurred in Boston. It was one of our largest...

Earlier this month, another successful edition of the Open Data Science Conference occurred in Boston. It was one of our largest conferences ever with over 4500 attendees, 200+ speakers and countless connections that widened the scope of data science for all. ODSC East 2018 featured a treasure trove of speaker talent from across the big data, machine learning and AI spheres.

The event generated a fair amount of Twitter buzz based on the hashtags of #ODSC and #ODSCEast2018. Since we love data analytics as much as we do, what better way to review the conference through the lens of a Twitter analysis.

Using the popular Twitter API library Tweepy, we pulled around 5,600 tweets containing the hashtags of #ODSC and #ODSCEast2018. These tweets occurred between the time of May 1 12:00 am and May 4 11:59 pm EST. Using this data, we looked at the most popular tweets of the conference, the rate of tweets throughout the duration of the conference, and created a word cloud of the tweet corpus.

The following are the five tweets with the most likes.

3347 we will have as many data scientists as people in the world! 🙂 LOL @randal_olson#ODSC pic.twitter.com/FmqKE56osy

Fantastic talk by @GaryMarcus on injecting a dose of realism with #deeplearning #ODSC @odscai pic.twitter.com/4A4YEYnyaj

Slides for my 5:10PM talk on Hamiltonian Monte Carlo with #PyMC3 at #ODSCEast2018https://t.co/83U8fGusBl pic.twitter.com/GmxgJskyr0

Hillary Green-Lerman on the difference between a data analyst and a data scientist at #ODSCEast2018.

The data scientist description sounds more like a #MachineLearning Engineer to me, but definitions may vary by company. #DataScience

The Most Popular Talks and Presentations

One of the main things we wanted to examine is the rate of tweeting throughout the four days of the conference and specifically looking which events generated the most conversation on Twitter. 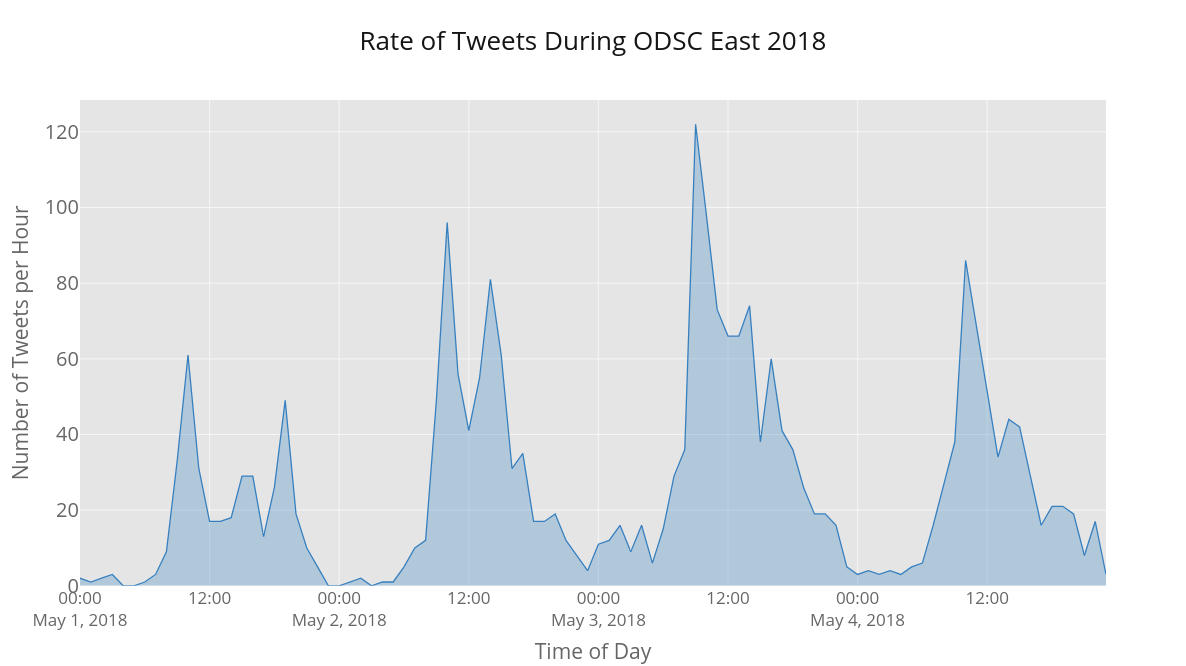 The plot confirms a hypothesis of mine which is that the keynote events, which took place during the morning would generate the most discussion on Twitter. The most popular (highly-trafficked) hour occurred on the third day of the conference between 9:00 am and 10:00 am EST, At this time, the two keynote events d were “Building a Data Science Company” by Drew Conway, and the ODSC Award Ceremony.

On May 1 and 2 the tweets came pouring in the most during the same time period of 9:00am-10:00am EST, once again aligning with the time at which the conference keynotes held their talks The last day of the conference also saw its highest rate of tweets happen during the same time period but ,interesting enough, there were no keynotes in that hour. There were, however,t a dozens maller  different talks and presentations such as “AI – a journey to Surpass the Turing Test” by Anisha Baidya, “Smart Cities Beyond Open Data” by Thomas Vanhove, and “Project Feels: Deep Text Models for Predicting the Emotional Resonance of New York Times Articles” by Alexander Spangher.

To get a sense of the topics of the ODSC East 2018 Twitter corpus, we utilized the always popular wordcloud to illustrate the themes of the conference discussion on Twitter.

From “Learn AI” to “Tutorials” to “Amazing,” our Twitter analysis only scraps the surface of the ODSC East 2018. The Twittersphere was alive and well throughout the conference and continues to echo conversations brought up throughout. Connect with ODSC and the community on Twitter and other channels to perpetuate the talks and ideas – until the next conference!