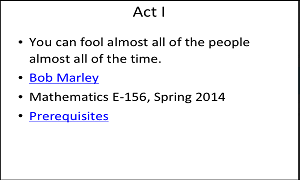 ODSC East 2015|Speaker Slides64
Adventures in using R to teach mathematics from odsc In 2014 I launched a new course, “Mathematical Foundations of Statistical Software,” in the Harvard...

Adventures in using R to teach mathematics from odsc

In 2014 I launched a new course, “Mathematical Foundations of Statistical Software,” in the Harvard Extension school, aimed at students with a solid background in calculus. Lectures were a mixture of proofs and R scripts, all homework was done in R, and students completed two major projects using R. Encouraged by the success of the course, I introduced R as a tool for doing linear algebra in the summer course: “Vectors: a Tool for Teaching Algebra, Geometry, and Trigonometry.” Use of R on the homework was limited to modifying scripts that had been presented in class. Again, the use of R was a success.
Last fall, in a large freshman course in linear algebra, real analysis, and multivariable calculus, I devoted about an hour per week to R scripts, without ever using a single statistical function. The interactive graphical capabilities of R permitted novel illustrations of concepts such as limits, eigenvectors, critical points, and vector fields. Extension students who cross-registered for the course liked the use of R, but the freshmen, when asked to suggest what could be done to improve the course, were almost unanimous in saying “Get rid of R!” The difference in the reaction of adult learners and freshmen, tested by doing a permutation test in R, is significant with a P-value of .01.

Presenter Bio
Paul Bamberg graduated from Harvard in 1963. After receiving his doctorate in theoretical physics from Oxford in 1967, he returned to Harvard, where he has taught almost 300 courses in physics, mathematics, computer science, and statistics. At present he is Senior Lecturer on Mathematics. In a parallel career, Paul was one of the founders of Dragon Systems, responsible for many of the innovations that made large-vocabulary speech recognition possible on personal computers.