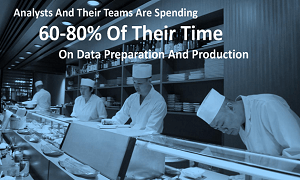 ODSC East 2015|Speaker Slides64
Big Data Infrastructure: Introduction to Hadoop with MapReduce, Pig, and Hive from odsc The main objective of this workshop is to...

Big Data Infrastructure: Introduction to Hadoop with MapReduce, Pig, and Hive from odsc

The main objective of this workshop is to give the audience hands on experience with several Hadoop technologies and jump start their hadoop journey. In this workshop, you will load data and submit queries using Hadoop! Before jumping in to the technology, the Founders of DataKitchen review Hadoop and some of its technologies (MapReduce, Hive, Pig, Impala and Spark), look at performance, and present a rubric for choosing which technology to use when.

Gilbert Benghiat is one of three founders of DataKitchen, a company on a mission to integrate and prepare data to make data analysts and data scientists super powered. Gil’s career has always been data oriented starting with collecting and displaying network data at AT&T Bell Laboratories (now Alcatel-Lucent), managing data at Sybase (purchased by SAP), collecting and cleaning clinical trial data at PhaseForward (IPO and then purchased by Oracle), integrating pharmaceutical sales data at LeapFrogRx (purchased by Model N), and liberating data at Solid Oak Consulting. He has a Masters of Science in Computer Science from Stanford University and Bachelor of Science in Applied Mathematics/Biology from Brown University.

Christopher Bergh is a Founder and Head Chef at DataKitchen. Chris has more than 20 years of research, engineering, analytics, and executive management experience.Previously, Chris was Regional Vice President in the Revenue Management Intelligence group in Model N. Before Model N, Chris was COO of LeapFrogRx and analytics software and service provider. Chris led the acquisition of LeapFrogRx by Model N in January 2012. Prior to LeapFrogRx Chris was CTO and VP of Product Management of MarketSoft (now part of IBM) an Enterprise Marketing Management software vendor. Prior to that, Chris developed Microsoft Passport, the predecessor to Windows Live ID, a distributed authentication system used by 100s of Millions of users today. He was awarded a US Patent for his work on that project. Before joining Microsoft, he led the technical architecture and implementation of Firefly Passport, an early leader in Internet Personalization and Privacy. Microsoft subsequently acquired Firefly. Chris led the development of the first travel-related ecommerce web site at NetMarket. Chris began his career at the Massachusetts Institute of Technology’s (MIT) Lincoln Laboratory and NASA Ames Research Center. There he created software and algorithms that provided aircraft arrival optimization assistance to Air Traffic Controllers at several major airports in the United States. Chris served as a Peace Corps Volunteer Math Teacher in Botswana, Africa. Chris has an M.S. from Columbia University and a B.S. from the University of Wisconsin-Madison. He is an avid cyclist, hiker, reader, and father of two teenagers.

Eric Estabrooks is a Founder and VP of Cloud and Data Services at DataKitchen where he is focusing on client delivery and AWS cloud operations. Prior to DataKitchen, Eric was the VP of Cloud and Data Services at LeapFrogRx, acquired in 2013 by Model N (MODN), where be built a high performing data services team that had quality and process improvement baked into its DNA. LeapFrogRx provided a SaaS for analyzing sales & marketing data for its Pharma customers. Before coming to Boston, Eric was a lead developer and software architect at Premisys Corporation, acquired by J.D. Edwards, where he helped develop a Configure, Price, Quote (CPQ) platform for manufacturers of highly customizable products in a variety of industries. Eric was co-founder at Open Runway, an online, women’s fashion company that produced one of a kind handbags and shoes. At Open Runway, he lead the development of an cutting edge Product Configurator, and a related online community. On the operations side, he helped develop novel mass-customization processes that were applied in footwear and handbag factories in China and Portugal. Eric holds a B.S. in Mechanical Engineering from Penn State University. He was bit by the software bug, early in his career, while working on Finite Element Analysis and implementing algorithms to model material deformation at high temperature. He is looking forward to start bagging those 4k peaks with his newly arrived son.