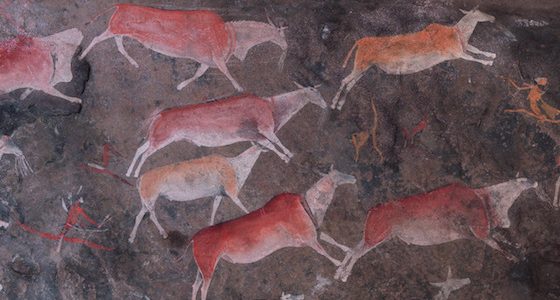 Machine Learning111
Above is an image of the Zaamenkomst panel: one of the best remaining exemplars of rock art from the San people of Southern...

Above is an image of the Zaamenkomst panel: one of the best remaining exemplars of rock art from the San people of Southern Africa. As soon as you see it, you are inevitably herded, like the eland in the scene, through a series of thoughts. Does it have a meaning?  Why are the eland running? What do the white lines coming from the mouths of the humans and animals signify? What event is unfolding in this scene? These are questions of interpretation, and of explanation. Explanation is something people actively seek, and can almost effortlessly provide. Having lost their traditional knowledge, the descendants of the San are unable to explain what the scene in the Zaamenkomst panel means. In what ways can machine learning systems be saved from such a fate? For this, we turn to the psychology of explanation, the topic we explore in this post.

Explanation is an omnipresent factor in our reasoning: it guides our actions, influences our interactions with others, and drives our efforts to expand scientific knowledge. Reasoning can be split into its three constituents: deduction, reaching conclusions using consistent and logical premises; induction, the generalisation and prediction of events based on observed evidence and frequency of occurrence; and abduction, providing the simplest explanation of an event. We don’t often use these words in machine learning, but these concepts are part of our widespread practice: deduction is implied when we use rule-learning, set construction and logic programming; inductive and transductive testing, i.e. making use of test data sets, is our standard protocol in assessing predictive algorithms; and abduction is implied when we discuss probabilistic inference and inverse problems. It is this third type of reasoning, abductive inference, that in both minds and machines gives us our ability to provide explanations, and to use explanations to learn and act in the future. 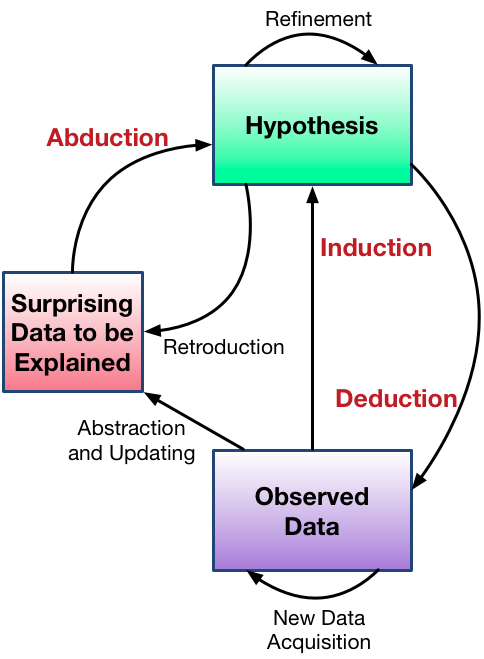 Connections between the different types of reasoning.

The Psychology of Explanation

Abductive inference is the aspect of reasoning concerned with developing and choosing hypotheses that best explain a situation or data: an emphasis on how explanatory hypotheses are generated, evaluated, tested, and extended [1]. Psychologists often refer to the ability for abduction in people—the ability to spontaneously and effortlessly draw conclusions from our knowledge and experiences—as everyday inference. While seemingly effortless, abduction requires us to engage a multitude of complex cognitive functions, including causal reasoning, mental modelling, categorisation, inductive inference, and metacognitive processing. And in turn, a multitude of cognitive functions depend on our ability to offer explanatory judgements, including plan recognition, diagnosis and theory refinement. It is then not surprising that explanation continues to be active area of research, with many of the most influential ideas in modern psychology being views on explanation and abduction [2].

Let’s sample some of this thinking, beginning with the commonsense psychology or attribution theory of Fritz Heider [3]. The Heiderian view is that we explain events in order to relate them to more general processes. This allows us to obtain a more stable environment, and ultimately, the possibility to control our environment. From this stems the psychology of naive, folk, or intuitive theories [4]. In this framework, we form ‘theories’ of the world that allow us make useful explanatory judgements: again, better explanations leads to better predictions leads to better control. George Kelly recognised explanation as a key part of his personal construct psychology [5] of which an important component is the now famous analogy that we think of ‘man-the-scientist’ rather than ‘man-the-biological-organism’, because of the need to hypothesise, test and explain. The mechanisms of abduction, shown in the flow diagram above, is a basis for scientific explanation and explanatory coherence [6], and is triggered by an initial puzzlement or surprise, leading to a search for explanation, the generation of potential hypotheses, the evaluation of these hypotheses, and finally some satisfaction or conclusion. The role of explanation is supported by several sources of evidence that leaves us with a broad insight:

This discussion paints a high level view of explanation, and I suggest these sources for more depth:

We began with the cognitive observation that explanation is a central part of human reasoning, and found much evidence for this in animals, infants, children and adults, along with an understanding of the impacts and limitations of our human explanatory powers. In building machines that think and learn, our cognitive inspiration is clear: systems for abductive inference, hypothesis formation and evaluation are essential. These systems help form the basis of our intuitive theories, models of the world, and of our decision making. Fortunately, abduction is not unfamiliar to machine learning.

Connections between the different types of reasoning.

Our basic tool with which to incorporate the ideals of ubiquitous explanation and abduction remains, as always, probability. This forms the basis of all types of explanation—functional, mechanistic and formal—in machine learning. Again, it is useful to align our language. An inductive hypothesis is a general theory that explains observations across a wide range of cases: we use the words generalisation and prediction. An abductive hypothesis is an explanation that is related to a specific observation or case: we simply use the word inference, the estimation of unobserved events or probabilities in our models given data [7]. This alignment tells us how the taxonomy of reasoning is related to probabilistic machine learning, and allows us to combine tools from many subject areas. Along with introductory sources, these areas include:

It was recently suggested that forthcoming European regulations create a ‘right to explanation’ when machine learning systems are used in decision making. There are arguments both for and against this suggestion, but policy considerations aside, this emphasises further the importance of explanation and abductive inference in our current practice. The eland in the rock painting are running towards the elusive spirit world. By taking inspiration from cognitive science, and the many other computational sciences, and combining them into our machine learning efforts, we take the positive steps on our own path to the hopefully less elusive world of machine learning with explanations.

Complement this essay with its prelude that contextualises the cognitive architectures that inform these essays, a short discussion on generative models and auto-encoders, and a neuroscience-inspired series of essays onlearning in brains and machines.