Conversion rates — you are (most likely) computing them wrong

How hard can it be to compute conversion rate? Take the total number of users that converted and divide them with...

Fresh out of school I joined Spotify as the first data analyst. One of my first projects was to understand conversion rates. Conversion rate from the free service to Premium is tricky because there’s a huge time lag. At that time, labels were highly skeptical that we would be able to convert many users, and this was a contentious source of disagreement. We had converted a really small fraction of our users, and we kept growing our free users like crazy. The conversion rates was standing still, if not going down.

The “insight” I had was when I started breaking it up into cohorts. For instance, look at all users that joined on May 1 and track their conversion rate over time. The beautiful thing that happened was that the conversion rate keeps growing and growing over time. People converted at an almost uniform rate over the first few years. It was amazing to see. Some of the old cohorts that had used the service for 2+ years had some crazy high conversion rates, like 40-50%. This insight it implied that conversion rates wasn’t a big problem, and it was only becuase we were growing exponentially that the current conversion rate looked “artificially” low. 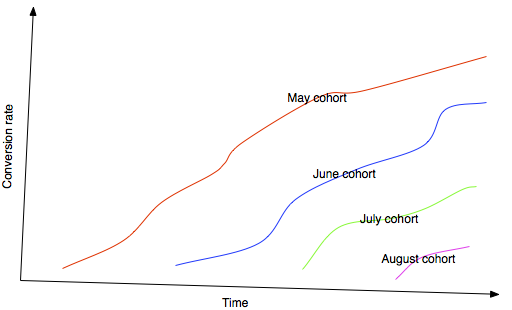 Let’s go through an example of all the bad ways to look at conversion and then arrive at what I think of as the “best way” (in my  correct opinion). Just for fun, I scraped a bunch of startup data from a well-known database of startups. Not going to get into all the gory details of the scraping, except that scraping is fun and if you do it too much your scraper gets banned… I probably could have used some lame boring data set, but data analysis is 38.1% more fun if you can relate to the data.

I have about 1,836 companies in the data set that were invested at some point, and 243 (13%) that exited at some point (either IPO or acquisition). So let’s for instance ask ourselves, how is the conversion rate going? Are newer companies exiting at a higher rate than older companies? Or is it getting harder over time to exit? The naïve way is to break it up by year founded and compute the conversion rates: 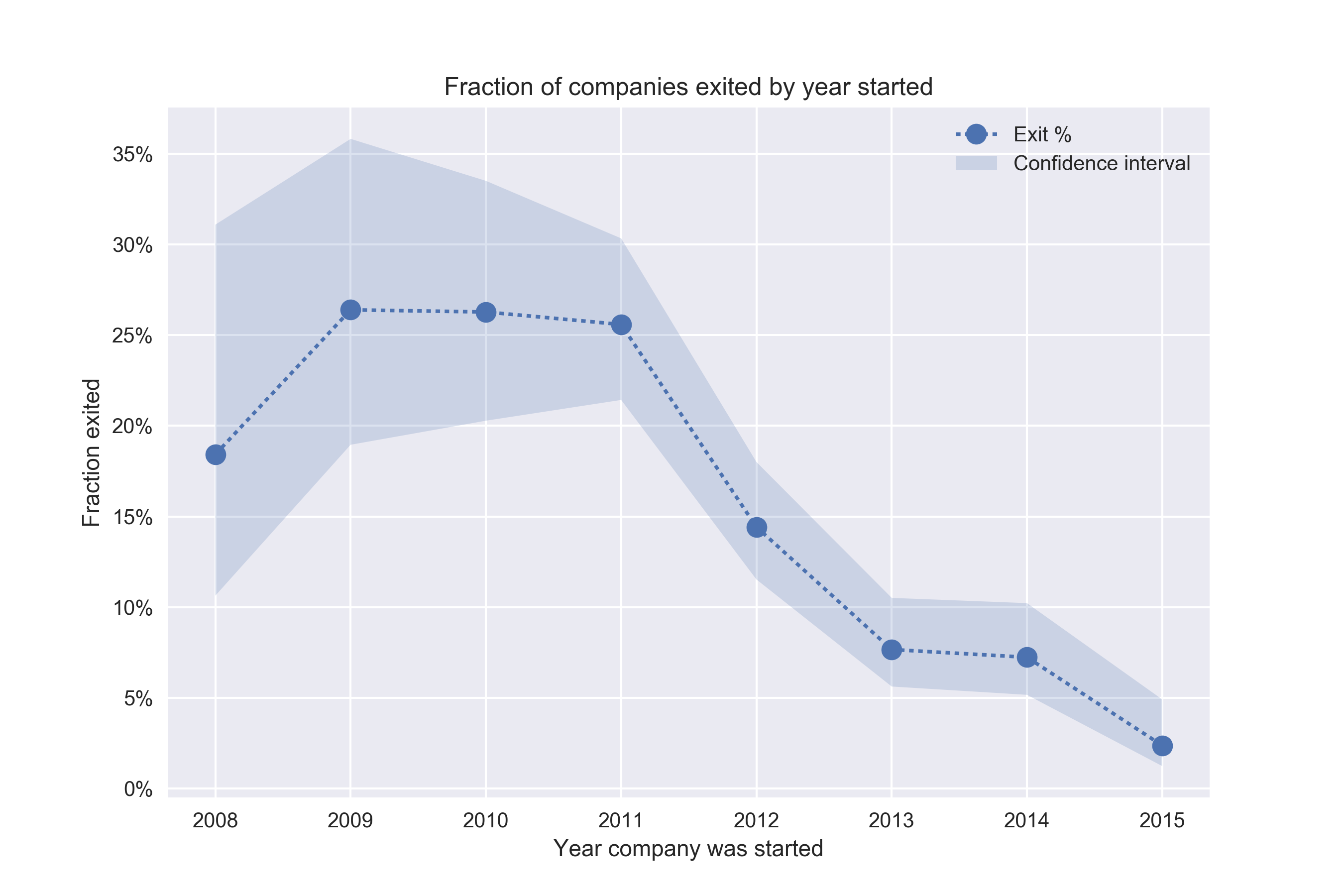 Except for 2008, it looks like the conversion rate is going down. Why? Is it harder and harder for companies to exit? Let’s look at the time to exit as well. 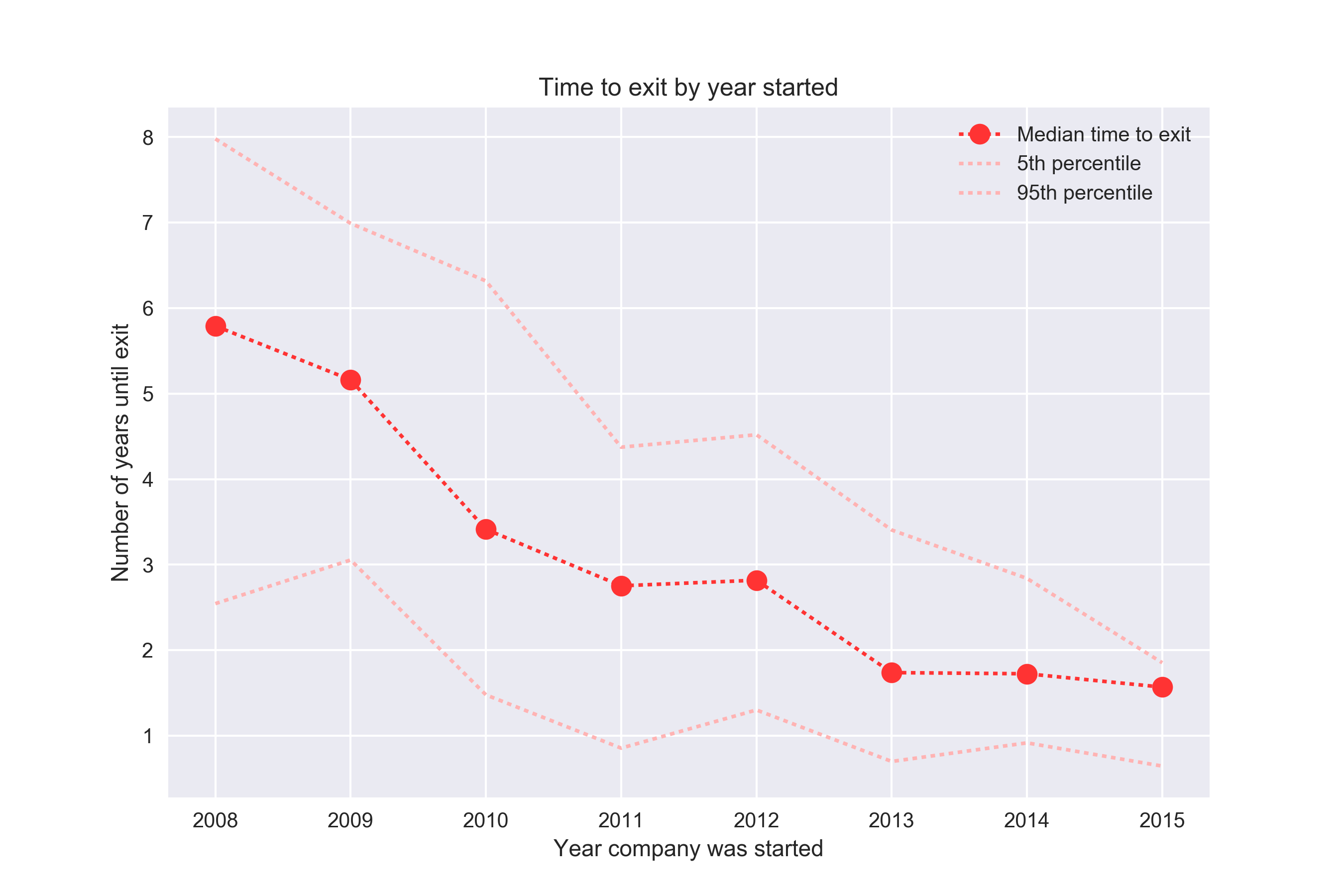 Here we see the opposite trend of what we saw in the previous chart — it seems like it’s getting easier and easier for companies to exit!

The right way to look at conversion rates — cohort plots

We extend this to all times T, and plot it as a function of T. Does it take longer to exit for startups that started in 2014 compared to 2008? Let’s take a look: 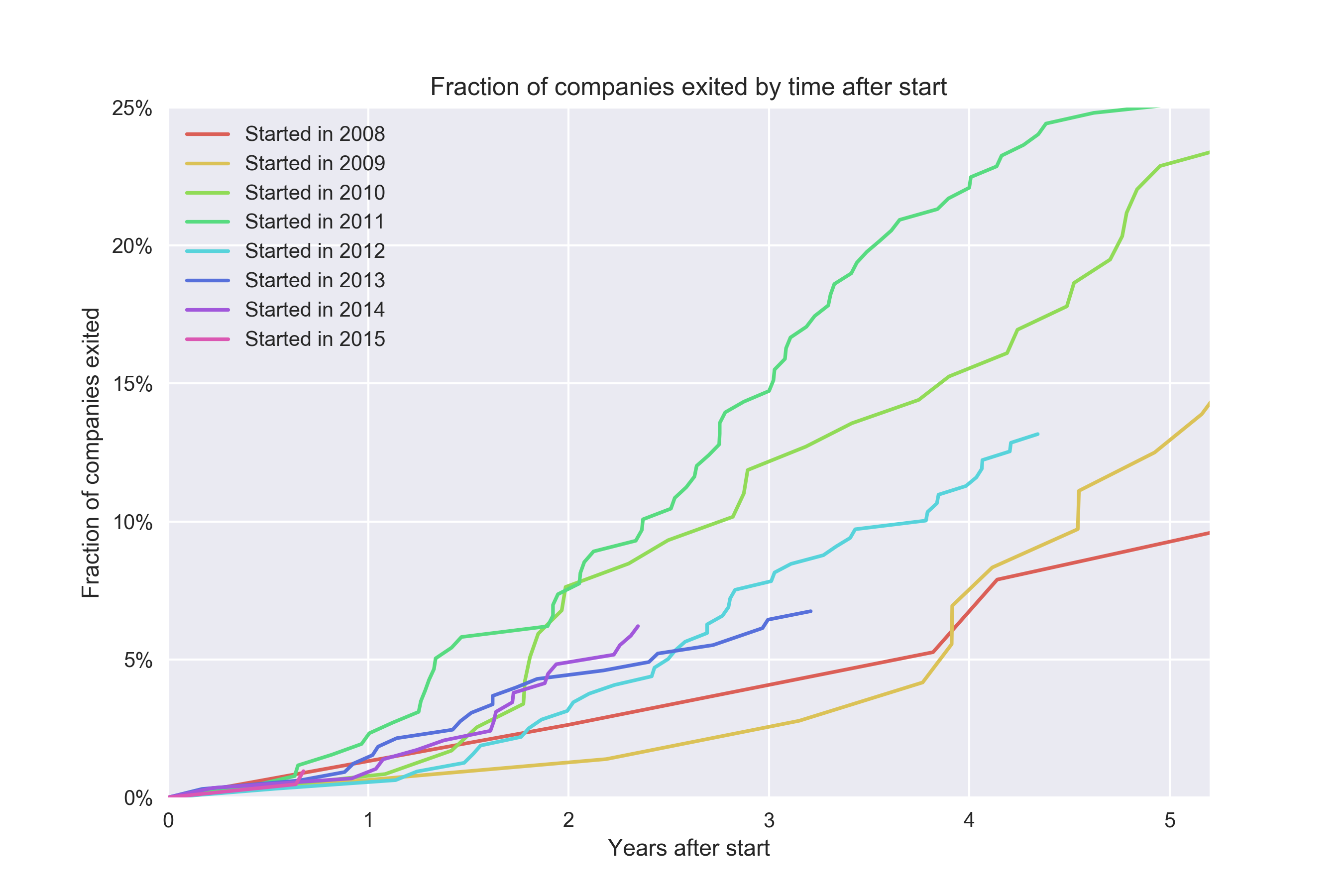 I’m not sure what’s the “official name” of a plot like this, but generally people refer to it as a cohort plot. For every cohort, we look at the conversion rate at time T. Note that since we don’t know anything about the future, we can’t say much about the 2016 cohort beyond ~5 months — it includes some companies started in Dec 2016 so we simply don’t have full data after 5 months. This is all great and checks a lot of boxes:

I generally think of this approach as “as good as it gets” in most situations. Except my only issue with it is that the idea of measuring “conversion at time T” means we can’t use too much recent data. For instance, it would be much better if we could look at 2017 data and see how well it’s converting? I like metrics to have fast feedback loops so surely we can do better? Turns out we can.

The  way to look at conversion rates — Kaplan-Meier

Kaplan-Meier is a non-parametric estimator originally used to estimate the survival function. Turns out the survival function is 1 minus the conversion rate, so it’s the exact same thing essentially. Non-parameteric is good if you have no idea what the underlying distribution you are modeling is.

The best part of the Kaplan-Meier is that it lets us include data for which we simply haven’t observed anything past a certain point. This is best illustrated if we broaden each cohort a bit so that they contain a larger span. Let’s say we’re trying to understand the conversion rate of the 2008-2011 cohort vs the conversion rate of the 2012-2015 cohort. The hypothesis would be that we want to understand how the exit rate has changed over time: 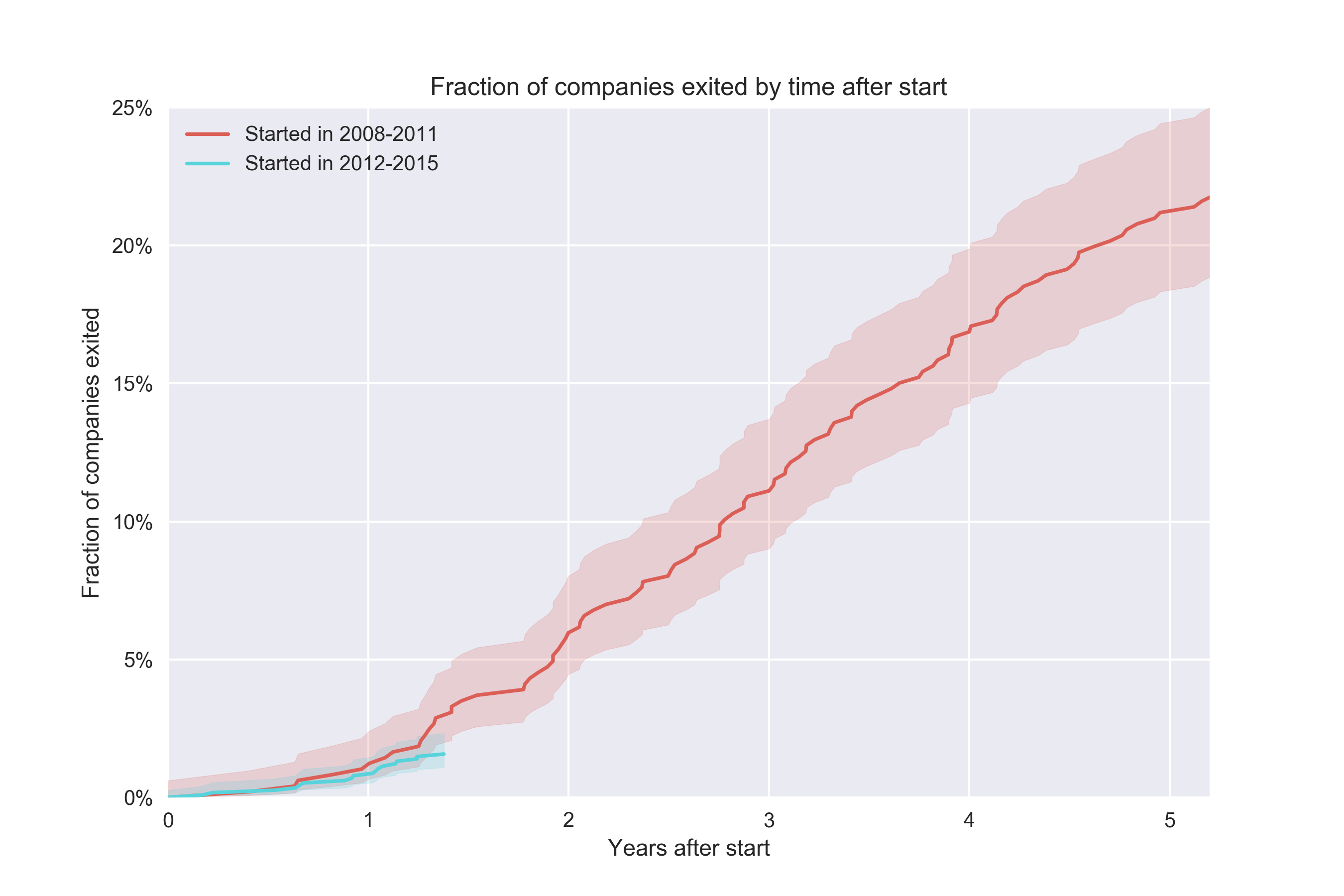 This is a super simple plot to draw except for the confidence interval. Just literally divide the number of exited companies by the total number of companies to get a rate.

The problem here is that we can’t say anything about the second cohort beyond ~1.5 years because that would require saying something about future data. This cohort contains companies up to and including Dec 31, 2015, which have had slightly less than 18 months of history to convert. On the other hand, the oldest companies in this cohort are from Jan 2012, so they have had a lot of time to convert. Surely we should be able to plot something more for this cohort. The Kaplan-Meier estimator lets us work with this issue by being smart with how it treats “future” data for different observations (“censored” observations, as it’s called in survival analysis lingo): 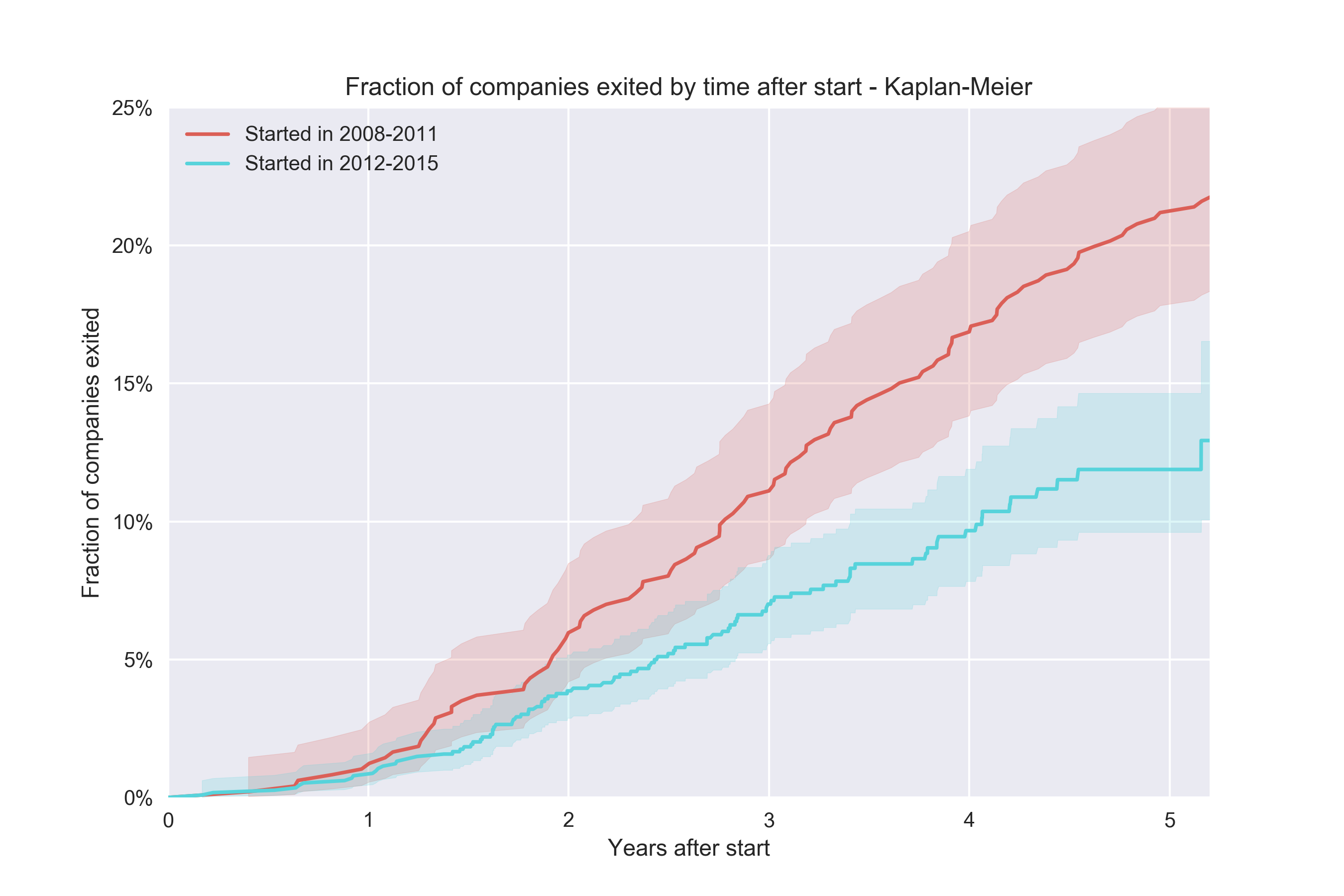 The implementation is absolutely trivial, although I used the lifelines packages in Python to get this and we also get a snazzy confidence interval for free (this is a bit harder to do). So the conclusion here is that yes — it seems like newer companies don’t convert at the same rate as older.

If you want to implement Kaplan-Meier yourself, the idea is basically to compute a conversion “survival rate”. If we start out with 100 items and one of them convert at time 1, the survival rate is 99%. We keep computing those rates and multiply them together. When data is “censored”, we just remove from the denominator:

Kaplan-Meier lets us get a bit more out of each cohort. Look at what happens if we plot one cohort for each year:

In a previous post, I built a tool to analyze the survival of code. Given that it’s obviously survival analysis, I went back and updated the tool tool to plot survival rates (of code) using Kaplan-Meier since it was such a tiny diff. Here’s the survival curve of individual lines of code of Git itself: 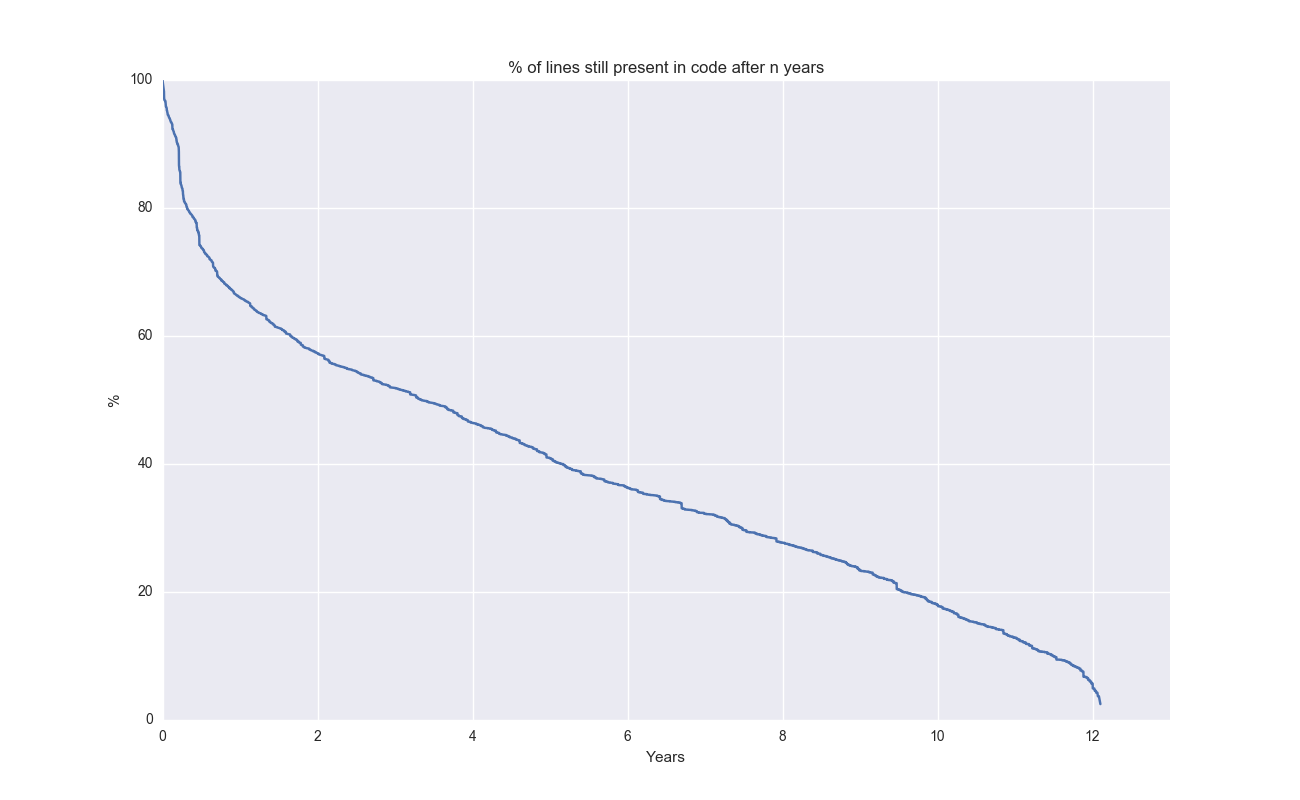 Cool to see that a few lines of code are still present after 12 years!