DALL-E Has Taken the Most Terrifying Selfies Ever

DALL-E1 openai4
Open AI’s DALL-E, created by the non-profit’s GPT-3 Artificial Intelligence system, made a fascinating picture when it was asked to take...

Open AI’s DALL-E, created by the non-profit’s GPT-3 Artificial Intelligence system, made a fascinating picture when it was asked to take what it thought would be the last selfie that a human would ever take on Earth.

The program, which is designed to produce original images using only text descriptions that anyone can enter, created a series of ghoulish photos. In the series of images that DALL-E created, a clear theme of the depressing end of humanity is shown. As each photo is shown, depicts not only a dead Earth, or Earth on fire can be seen, but humans who have clearly undergone some sort of disastrous events. 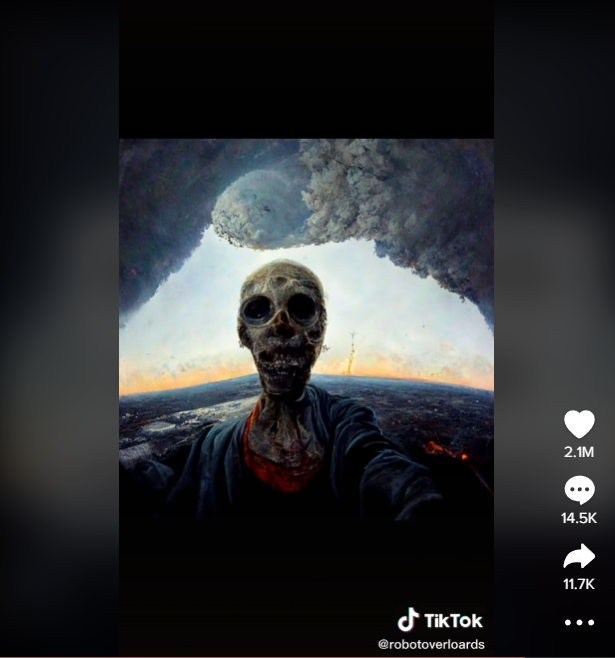 The eighteen-second video, which can be seen here on TikTok and released by Robotoverlords, shows four ghastly selfies from what the AI believes would be the final selfies of humanity. In each photo you see depicts of Earth charred, on fire, or experiencing a disaster of global proportions. Even the humans who are depicted taking the selfies themselves can be seen altered by the events surrounding them.

So far, the video is a massive hit on the popular micro video blogging platform. Gaining over Twelve million views and two million likes, the comments are filled with users pointing out different scenarios they believe each photo depicts; with one of the most being nuclear war. While others commented that what was created by Open AI’s DALL-E was terrifying.

This isn’t the first time that the program has been used to create images of what it thinks of certain subjects. The TikTok account is filled with the AI displaying what images would be produced by humans mutating, and the inside of a black hole. The program that created these images is free to use and you can do so both on desktop and mobile.