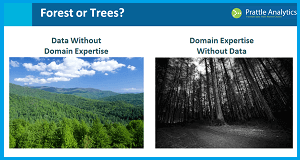 ODSC East 2015|Speaker Slides64
Domain Expertise and Unstructured Data from odsc Data science allows us to turn a dark forest into a world of perpetual...

Data science allows us to turn a dark forest into a world of perpetual twilight by giving us the tools to better understand the data that surrounds us. Unfortunately, in this world of twilight we still need a flashlight to get a clean crisp image of our immediate surroundings. We will talk about how to use deep domain expertise as that flashlight shedding light on our understanding of data. Our focus will be on using text analysis as a means to examine qualitative information in a structured, quantitative way. We will draw heavily from examples in complex central bank policy and financial regulation.

William has conducted extensive research on government finance that he has presented at Yale, Princeton, and the Stanford Graduate School of Business. His statistical and econometric work has been published in diverse disciplines including political economy, public health, and medicine. His work has also been featured in the Columbia Journalism Review.

As a researcher and programmer, William has authored original software to estimate spatio-temporal models of trade flows, dynamic discrete choice models of government policy, and hidden-state Markov switching models of exchange rates and policy regimes. He has taught computing, statistics, econometrics and political economy at the University of Michigan and Washington University. He has also worked as a professional data scientist and fraud analyst for several large corporations.

Evan Schnidman: Evan has been featured in Bloomberg News and on The Deal. Evan’s financial research has been featured in The Wall Street Journal, Bloomberg View and Seeking Alpha while his academic research has been published in journals and edited volumes. Notably, Evan’s first article in Bloomberg, “Strong Dollar Advocates Make a Weak Case” (Jan. 25, 2012), showcased a mathematical model he designed to successfully predict every intermediate S&P 500 market bottom and top since 2008. Evan’s financial research will be further showcased in his forthcoming book (co-authored with William MacMillan) titled “How the Fed Moves Markets.”

In his consulting capacity, Evan has vetted the political, economic and financial risks of major infrastructure investments for large corporations. Evan has also vetted finances, management structures and community engagement of small and midsize financial institutions to maximize relationships, tax status and grant opportunities from the government. From 2010-2014 Evan taught courses in economics, public policy and political science at Harvard University and Brown University.

Evan holds a Ph.D. from Harvard University as well as Bachelors and Masters Degrees from Washington University in St. Louis.