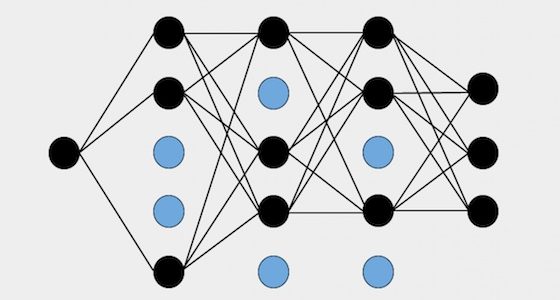 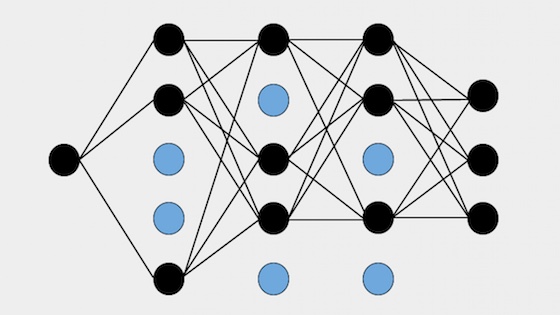 Python|Theano1
Almost everyone working with Deep Learning would have heard a smattering about Dropout. Albiet a simple concept (introduced a couple of...

Almost everyone working with Deep Learning would have heard a smattering about Dropout. Albiet a simple concept (introduced a couple of years ago), which sounds like a pretty obvious way for model averaging, further resulting into a more generalized and regularized Neural Net; still when you actually get into the nitty-gritty details of implementing it in your favorite library (theano being mine), you might find some roadblocks there. Why? Because it’s not exactly straight-forward to randomly deactivate some neurons in a DNN.

In this post, we’ll just recapitulate what has already been explained in detail about Dropout in lot of papers and online resources(some of these are provided at the end of the post). Our main focus will be on implementing a Dropout layer in Numpy and Theano, while taking care of all the related caveats. You can find the Jupyter Notebook with the Dropout Class here.

Regularization is a technique to prevent Overfitting in a machine learning model. Considering the fact that a DNN has a highly complex function to fit, it can easily overfit with a small/intermediate size of dataset.

In very simple terms – Dropout is a highly efficient regularization technique, wherein, for each iteration we randomly remove some of the neurons in a DNN(along with their connections; have a look at Fig. 1). So how does this help in regularizing a DNN? Well, by randomly removing some of the cells in the computational graph(Neural Net), we are preventing some of the neurons(which are basically hidden features in a Neural Net) from overfitting on all of the training samples. So, this is more like just considering only a handful of features(neurons) for each training sample and producing the output based on these features only. This results into a completely different neural net(hopefully ;)) for each training sample, and eventually our output is the average of these different nets(any Random Forests-phile here? :D).

In Fig. 1, we have a fully connected deep neural net on the left side, where each neuron is connected to neurons in its upper and lower layers. On the right side, we have randomly omitted some neurons along with their connections. For every learning step, Neural net in Fig. 2 will have a different representation. Consequently, only the connected neurons and their weights will be learned in a particular learning step. 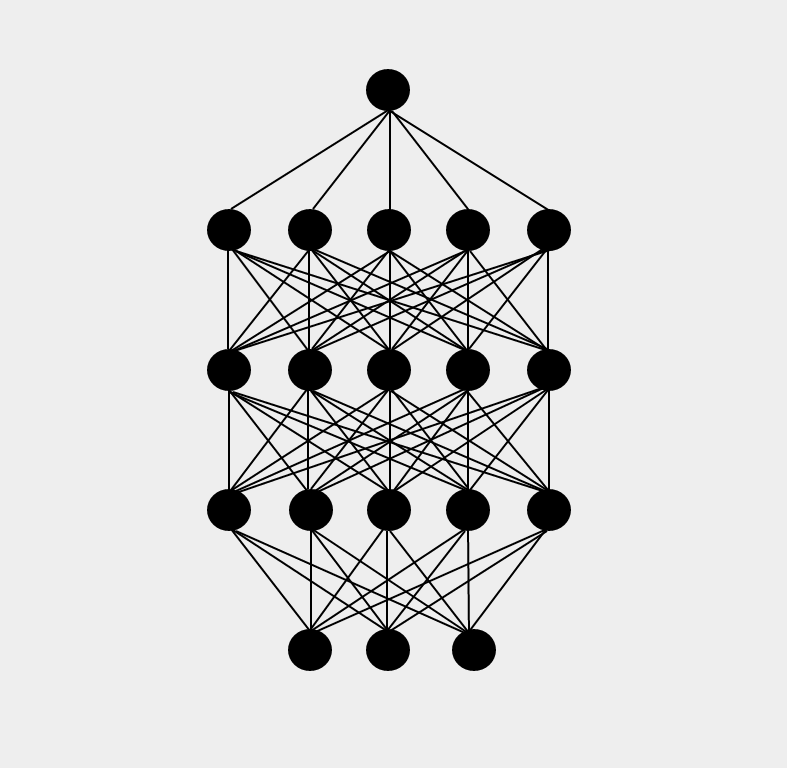 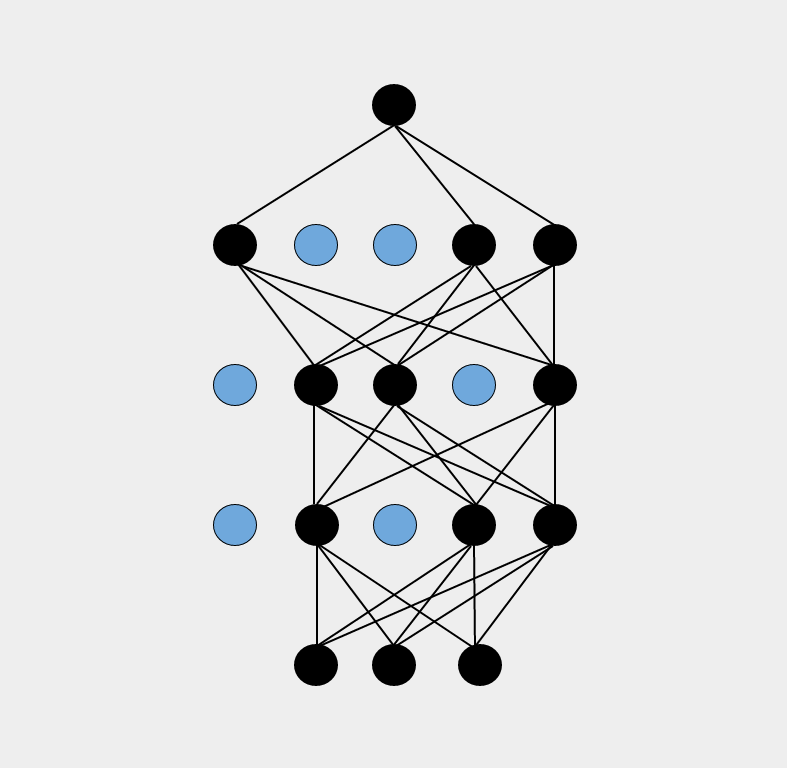 Let’s dive straight into the code for implementing a Dropout layer. If you don’t have prior knowledge of Theano and Numpy, then please go through these two awesome blogs by @dennybritz – Implementing a Neural Network from Scratch and Speeding up your neural network with theano and gpu.

As recommended, whenever we are dealing with Random numbers, it is advisable to set a random seed.

Let’s enumerate through each line in the above code. Firstly, we import all the necessary modules(more about RandomStreams in the next few lines) and initialize the random seed, so the random numbers generated are consistent in each different run. On the second line we create an object rng of numpy.random.RandomState, this exposes a number of methods for generating random numbers, drawn from a variety of probability distributions.

Theano is designed in a functional manner, as a result of this generating random numbers in Theano Computation graphs is a bit tricky compared to Numpy. Using Random Variables with Theano is equivalent to imputing random variables in the Computation graph. Theano will allocate a numpy RandomState object for each such variable, and draw from it as necessary. Theano calls this sort of sequence of random numbers a Random Stream. The MRG_RandomStreams we are using is another implementation of RandomStreams in Theano, which works for GPUs as well.

So, finally we create a srng object which will provide us with Random Streams in each run of our Optimization Function.

Here is our main Dropout function with three arguments: srng – A RandomStream generator, weight – Any theano tensor(Weights of a Neural Net), and drop – a float value to denote the proportion of neurons to drop. So, naturally number of neurons to retain will be 1 - drop.

On the second line in the function, we are generating a RandomStream from Binomial Distribution, where n denotes the number of trials, p is the probability with which to retain the neurons and size is the shape of the output. As the final step, all we need to do is to switch the value of some of the neurons to 0, which can be accomplished by simply multiplying mask with the weight tensor/matrix. theano.tensor.cast is further type casting the resulting value to the value of theano.config.floatX, which is either the default value of floatX, which is float32 in theano or any other value that we might have mentioned in .theanorc configuration file.

Our final dropout_layer function uses theano.ifelse module to return the value of either dropit or dont_dropit function. This is conditioned on whether our train flag is on or off. So, while the model is in training phase, we’ll use dropout for our model weights and in test phase, we would simply scale the weights to compensate for all the training steps, where we omitted some random neurons.

Finally, here’s how you can add a Dropout layer in your DNN. I am taking an example of RNN, similar to the one used in this blog:

Here, we have the forward_prop function for RNN+GRU model. Starting from the first line, we are creating a theano tensor variable x, for input(words) and another drop_value variable of type theano.tensor.scalar, which will take a float value to denote the proportion of neurons to be dropped.

Then we are creating an object dropout of the Dropout class, we implemented in previous sections. After this, we are initiating a GRU object(I have kept this as a generic class, since you might have a different implementation). We also have one more variable, namely params which is an OrderedDict containing the model parameters.

Furthermore, E is our Word Embedding Matrix, U contains, input to hidden layer weights, W is the hidden to hidden layer weights and b is the bias. Then we have our workhorse – the forward_prop function, which is called iteratively for each value in xvariable(here these values will be the indexes for sequential words in the text). Now, all we have to do is call the dropout_layer function from forward_prop, which will return W, U, with few dropped neurons.

This is it in terms of implementing and using a dropout layer with Theano. Although, there are a few things mentioned in the next section, which you have to keep in mind when working with RandomStreams.

Few things to take care of:

Wherever we are going to use a theano.function after this, we’ll have to explicitly pass it the updates, we got from theano.scan function in previous section. Reason?Whenever there is a call to theano’s RandomStreams, it throws some updates, and all of the theano functions, following the above code, should be made aware of these updates. So let’s have a look at this code:

As a standard procedure, we are using another model parameter V(hidden to output) and taking a softmax over this. If you have a look at predict, loss functions, then we had to explicitly, tell them about the updates that RandomStreams made during the execution of dropout_layer function. Else, this will throw an error in Theano.

What is the appropriate float value for dropout? To be on the safe side, a value of 0.5(as mentioned in the original paper) is generally good enough. Although, you could always try to tweak it a bit and see what works best for your model.

Lately, there has been a lot of research for better regularization methods in DNNs. One of the things that I really like about Dropout is that it’s conceptually very simple as well as an highly effective way to prevent overfitting. A few more methods, that are increasingly being used in DNNs now a days(I am omitting the standard L1/L2 regularization here):

The reason I wanted to write about this, is because if you are working with a low level library like Theano, then sometimes using modules like RandomStreams might get a bit tricky. Although, for prototyping and even for production purposes, you should also consider other high level libraries like Keras and TensorFlow.

Feel free, to add any other regularization methods and feedbacks, in the comments section.