Emphasizing Humanity in a World of AI and Software

Human Centered Design2
“Software is eating the world” – Mark Andreessen. AI and Software is a driving force in the new economy, but how...

“Software is eating the world” – Mark Andreessen. AI and Software is a driving force in the new economy, but how do we maintain the focus on humanity rather than software in the midst of never-ending Agile development? Peter Bull has a few thoughts about the importance of returning humans to the center of innovation and a case study to show how Human Centered Design and data science must inform each other for true innovation to happen. 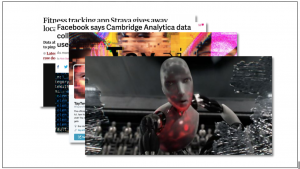 Building AI and software-driven products and services is a driving force behind the world economy, but problems creep in when we focus not on the human element of development but development for its own sake. By releasing developments without considering the real outcomes, we run the risk of ignoring or even creating ethical quandaries. Consider:

How Humans Get Involved

How can machines take over a process both effectively and ethically in the era of Software 2.0? Bull refers back to a classic L. Bruce Archer quote, “Design is what you do, not what you’ve done” to illustrate a fatal flaw in some developers’ thinking. Design comes from putting outcomes first rather than methods or outputs, a critical distinction to make for human-centered design.

If you’ve ever designed a dashboard no one looked at or accidentally created a solution with a negative impact, you’ll understand this concept. Human-centered design allows products and services to be more effective and more ethical. Let’s look at how this plays out in the real world. 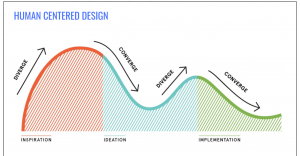 Bull worked on a project designed to bring digital money services to a traditionally unbanked population in Kenya. Because they had no bank account associated with their exchanges, this cash economy couldn’t take advantage of traditional services like Venmo or PayPal. Bull embarked on a human-centered design project using real-world data to solve this issue. His primary concerns were:

This kind of qualitative insight builds truly viable solutions. Bull expressed this in a quick formula: 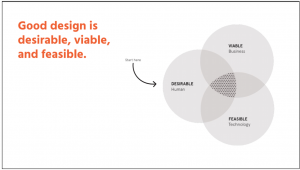 You can’t start with exciting tech or the business outcome, however. You start with a human focus. Here’s how Bull’s project went. 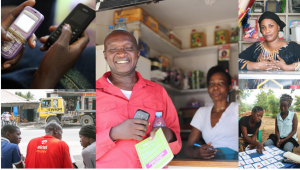 Around the beginning of the project, cell phone use exploded in the target region. What operators began to notice was no one used a subscription plan. Instead, they paid as they needed minutes. This translated to using those minutes as a form of currency where a customer would trade extra minutes for goods. Shopkeepers knew someone would come along and buy those minutes, creating a healthy flow of money through the shop or kiosk.

This began a series of both subscriber and agent solutions based on the real actions of how those two groups interacted with digital money. 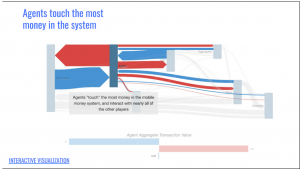 The subscriber concept was easy. What the team began to spend a lot of time on was incentivizing agents. They realized through data flow that money concentrated with the agent. Keeping subscribers coming to digital money would require better systems for the agents handling the transactions.

They began to test data sets and to observe that data in the field. First, they just watched transactions. Predictors of success began to emerge with the two-week mark being a critical turning point in a new agent’s success. They tested agent transactions through segmentation and designed tools that both intervened to train or modify agent behavior when failure seemed inevitable, and that allowed agents to view data themselves to make better decisions about incorporating digital money.

They also brainstormed ways to help build the critical trust between subscriber and agent that helped ensure success. One piece of essential data found by observing the field was the unique bond between the agent and users of the digital money system. A system was born. 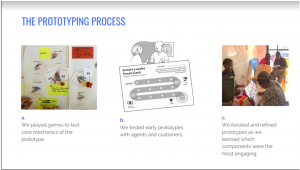 These programs ran in the field, many with low-fi iterations. They asked users to do simple budget tasks using paper clips. They used different types of loyalty cards to help build relationships between customers and agents, settling on a unique form of lottery system where both subscribers and their agents could win money together.

What emerged from this human-centered design was a unique system of digitizing money that worked the way actual people worked in their own environments. Tech may seem far beyond the way the project culminated, but the result was a system that solved a real need. The data was the design inspiration, but it was the human focus (observation in the field) that led to true innovation.

What This Means for Data Scientists 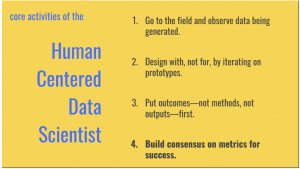 Peter Bull encourages you to think from a human standpoint in your data science and avoid those newbie mistakes. It’s important to follow what he calls the four critical components of Human Centered Design to help inform decisions and drive real business innovation:

Empathy, evidence, and iteration are the threads that bind HCD and data science, making them better together – Peter Bull