Classification2
In a recent post, I offered a definition of the distinction between data science and machine learning: that data science is focused...

I use both machine learning and data science in my work: I might fit a model on Stack Overflow traffic data to determine which users are likely to be looking for a job (machine learning), but then construct summaries and visualizations that examine why the model works (data science). This is an important way to discover flaws in your model, and to combat algorithmic bias. This is one reason that data scientists are often responsible for developing machine learning components of a product. 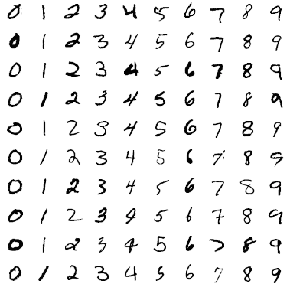 The challenge is to classify a handwritten digit based on a 28-by-28 black and white image. MNIST is often credited as one of the first datasets to prove the effectiveness of neural networks.

In a series of posts, I’ll be training classifiers to recognize digits from images, while using data exploration and visualization to build our intuitions about why each method works or doesn’t. Like most of my posts I’ll be analyzing the data through tidy principles, particularly using the dplyr, tidyr and ggplot2 packages. In this first post we’ll focus on exploratory data analysis, to show how you can better understand your data before you start training classification algorithms or measuring accuracy. This will help when we’re choosing a model or transforming our features.

The default MNIST dataset is somewhat inconveniently formatted, but Joseph Redmon has helpfully created a CSV-formatted version. We can download it with the readrpackage.

This dataset contains one row for each of the 60000 training instances, and one column for each of the 784 pixels in a 28 x 28 image. The data as downloaded doesn’t have column labels, but are arranged as “row 1 column 1, row 1 column 2, row 1 column 3…” and so on). This is a useful enough representation for machine learning. But as Jenny Bryan often discusses, we shouldn’t feel constricted by our current representation of the data, and for exploratory analysis we may want to make a few changes.

If your data’s huge, analyze a small subset first to check approach. Like navigating the route on a bike before trying your 18-wheeler truck

If your data’s huge, analyze a small subset first to check approach. Like navigating the route on a bike before trying your 18-wheeler truck

With that in mind, we’ll gather the data, do some arithmetic to keep track of x and y within an image, and keep only the first 10,000 training instances.

We now have one row for each pixel in each image. This is a useful format because it lets us visualize the data along the way. For example, we can visualize the first 12 instances with a couple lines of ggplot2. 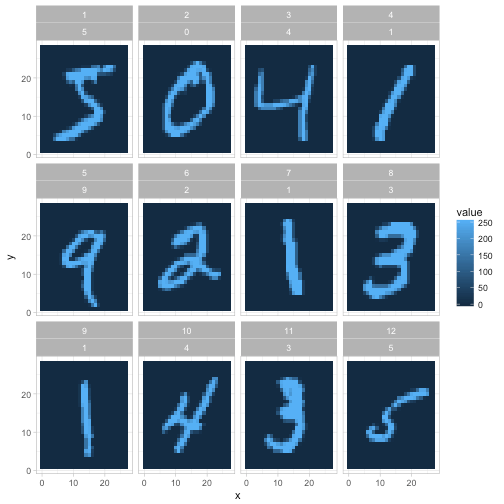 We’ll still often return to the one-row-per-instance format (especially once we start training classifiers in future posts), but this is a fast way to understand and appreciate how the data and the problem is structured. In the rest of this post we’ll also polish this kind of graph (like making it black and white rather than a scale of blues).

Let’s get more comfortable with the data. From the legend above, it looks like 0 represents blank space (like the edges of the image), and a maximum around 255 represents the darkest points of the image. Values in between may represent different shades of “gray”.

How much gray is there in the set of images? 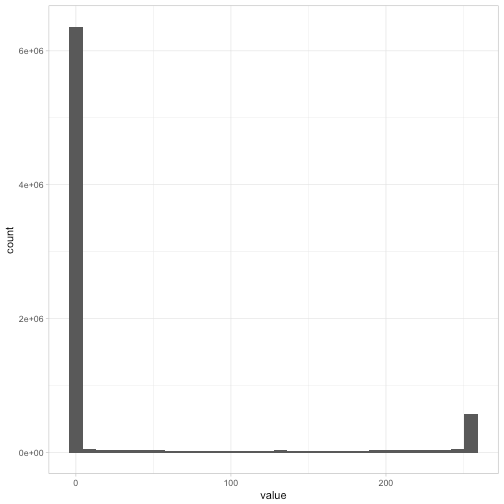 Most pixels in the dataset are completely white, along with another set of pixels that are completely dark, with relatively few in between. If we were working with black-and-white photographs (like of faces or landscapes), we might have seen a lot more variety. This gives us a hint for later feature engineering steps: if we wanted to, we could probably replace each pixel with a binary 0 or 1 with very little loss of information.

I’m interested in how much variability there is within each digit label. Do all 3s look like each other, and what is the “most typical” example of a 6? To answer this, we can find the mean value for each position within each label, using dplyr’s group_by and summarize.

We visualize these average digits as ten separate facets. 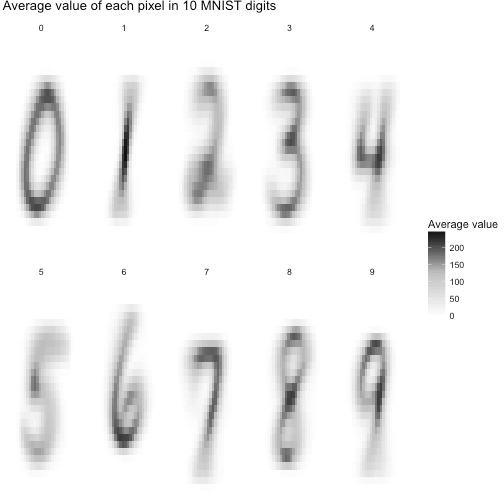 These averaged images are called centroids. We’re treating each image as a 784-dimensional point (28 by 28), and then taking the average of all points in each dimension individually. One elementary machine learning method, nearest centroid classifier, would ask for each image which of these centroids it comes closest to.

Already we have some suspicions about which digits might be easier to separate. Distinguishing 0 and 1 looks pretty straightforward: you could pick a few pixels at the center (always dark in 1 but not 0), or at the left and right edges (often dark in 0 but not 1), and you’d have a pretty great classifier. Pairs like 4/9, or 3/8, have a lot more overlap and will be a more challenging problem.

Again, one of the aspects I like about the tidy approach is that at all stages of your analysis, your data is in a convenient form for visualization, especially a faceted graph like this one. In its original form (one-row-per-instance) we’d need to do a bit of transformation before we could plot it as images.

So far, this machine learning problem might seem a bit easy: we have some very “typical” versions of each digit. But one of the reasons classification can be challenging is that some digits will fall widely outside the norm. It’s useful to explore atypical cases, since it could help us understand why the method fails and help us choose a method and engineer features.

In this case, we could consider the Euclidean distance (square root of the sum of squares) of each image to its label’s centroid.

Measured this way, which digits have more variability on average? 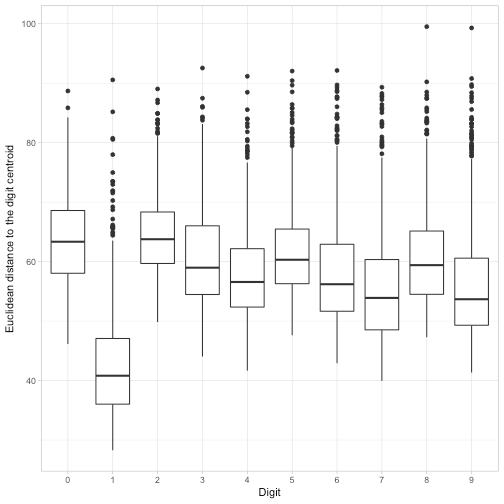 It looks like 1s have especially low distances to their centroid: for the most part there’s not a ton of variability in how people draw that digit. It looks like the most variability by this measure are in 0s and 2s. But every digit has at least a few cases with an unusually large distance from their centroid. I wonder what those look like?

To discover this, we can visualize the six digit instances that had the least resemblance to their central digit.

I am a Data Scientist at Stack Overflow. In May 2015 I received my PhD in Quantitative and Computational Biology from Princeton University, where I worked with Professor John Storey. My interests include statistics, data analysis, genomics, education, and programming in R.