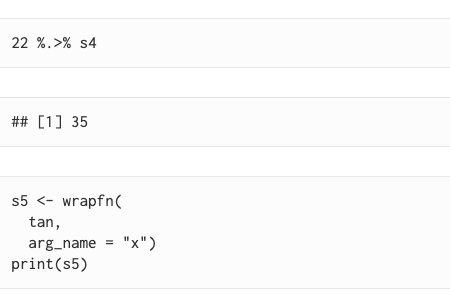 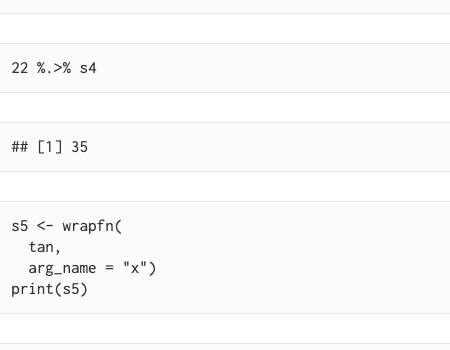 Function Objects and Pipelines in R

Some notable realizations of sequencing or pipelining operations include:

The idea is: many important calculations can be considered as a sequence of transforms applied to a data set. Each step may be a function taking many arguments. It is often the case that only one of each function’s arguments is primary, and the rest are parameters. For data science applications this is particularly common, so having convenient pipeline notation can be a plus. An example of a non-trivial data processing pipeline can be found here.

In this note we will discuss the advanced R pipeline operator “dot arrow pipe” and an S4 class (wrapr::UnaryFn) that makes working with pipeline notation much more powerful and much easier.

Or: pipe notation assumes a world data transforms are single argument functions (with other parameters already bound in), and the UnaryFn derived classes we discuss here help realize such a world.

This can be made clearer with examples.

Suppose we build a linear model of log(y) as follows.

We can see our predictions in original y-units by making the prediction and then exponentiation:

It is natural to want to apply a model later to new data. This can be done as follows.

The wrapr package allows us to use a “piping into a function” notation as follows. 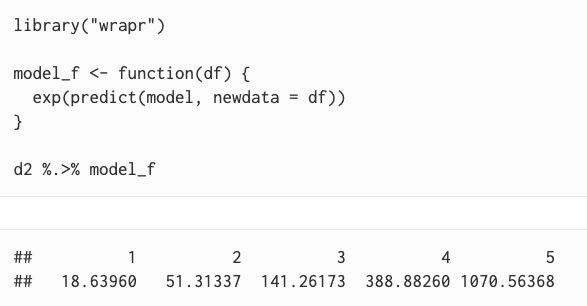 In the above example the model contents are captured in the function closure. However, it is better practice to explicitly store data in objects.

wrapr supplies a method to do this, which we will now demonstrate. 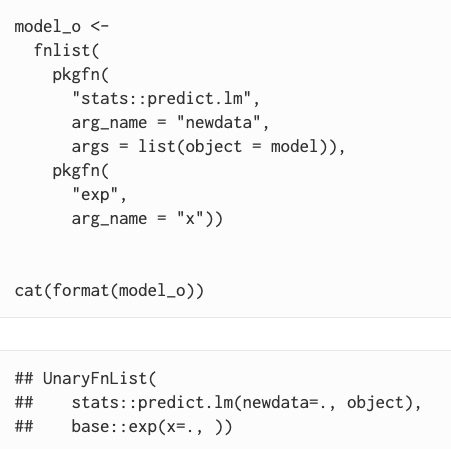 Notice model_o is an object (not a function). However we can pipe into model_o as if it were a function.

This works because model_o is derived from the S4 class UnaryFn and wrapr has definitions for apply_right.UnaryFn and apply_left.UnaryFn, which integrate this class into the wrapr dot-arrow pipe. The family of UnaryFn classes single argument functions. This system happens to be implemented by wrapr, but wrapr dot arrow extension mechanisms also allow users to build their own pipe-compatible systems. (S3/S4 extension details can be found in the RJournal here.

The pipe notation is not strictly required as the apply is done through the S4 method wrapr::ApplyTo().

The above methods can be used to wrap substantial functions such as vtreat::prepare() to create very powerful data processing pipelines. A more involved example of trying this technique can be found here.

Note: the wrapr right-dispatch we are using is only triggered when the right-hand side of a pipeline is a symbol or name. This is consistent with pipelines such as “5 %.>% sin” where we are not so much piping into the sin-function, but into a name that refers to the sin-function. However, piping into names covers most practical cases.

We can apply processing pipelines piece by piece. 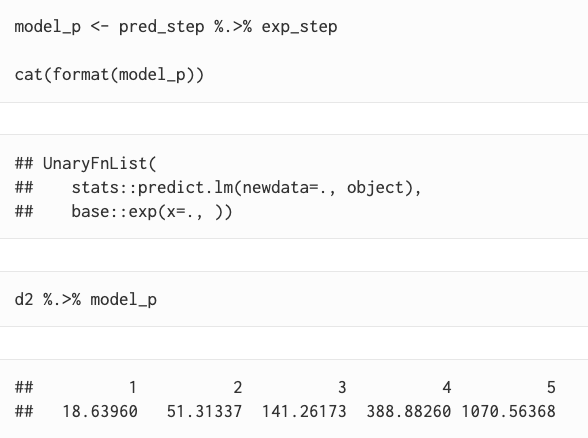 We can also build such a pipeline by piping pieces into each other.

The pipe notation is not required (but is a nice notation). The apply a list of function objects effect can be achieved directly with wrapr::ApplyTo().

We can look at the contents of a pipeline as follows. 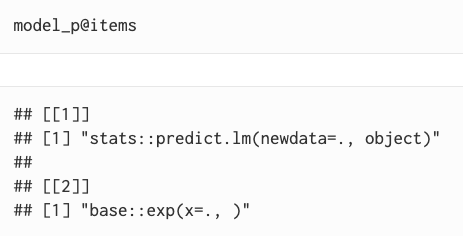 In addition to the PartialNamedFn class we suggest looking at the following additional adapters: 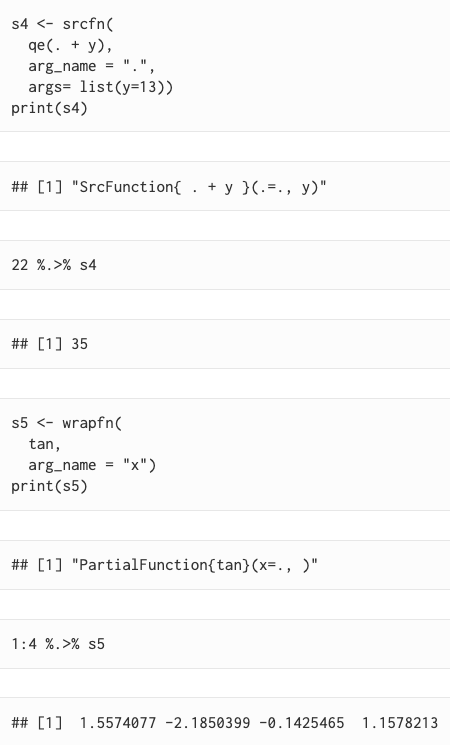 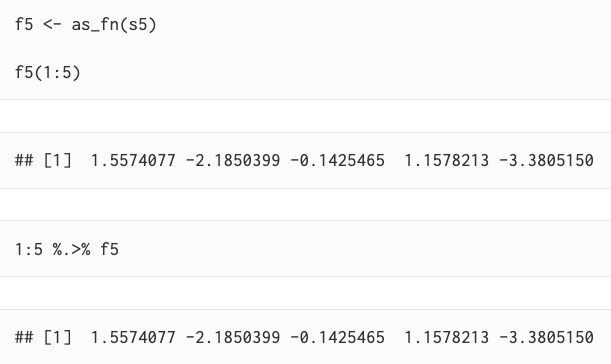 The idea is wrapr supplies many possible variations of notations: functions sequences as lists, function composition by pipe, function composition by call, function application by pipe, and function application by call. Then the user can pick what notation they prefer. rquerypipelines are very restricted (they date data.frames to data.frames and pre-check a number of invariants). UnaryFn pipelines are more free-form, they check very little before application.

The demonstrated design and functionality is inspired by partially applied functions, but a bit more circumspect in what is carried around. In Lisp “code is data”, in R it is a bit more complicated- so a pure-data solution has some merits.

And these are the basics of wrapr function objects. For a more substantial data processing example please see here.