This is the fourth article in a series about changes in support for gun control laws over the last 50 years....

This is the fourth article in a series about changes in support for gun control laws over the last 50 years.

In the first article I looked at data from the General Social Survey and found that young adults are less likely than previous generations to support gun control.

In the second article I looked at data from the CIRP Freshman Survey and found that even the youngest adults, who grew up with lockdown drills and graphic news coverage of school shootings, are LESS likely to support strict gun control laws.

In the third article, I ran graphical tests to distinguish age, period, and cohort effects.  I found strong evidence for a period effect: support for gun control among all groups increased during the 1980s and 90s, and has been falling in all groups since 2000.  I also saw some evidence of a cohort effect: people born in the 1980s and 90s are less likely to support strict gun control laws.

In this article, I dive deeper, using logistic regression to estimate the sizes of these effects separately, while controlling for demographic factors like sex, race, urban or rural residence, etc.

As in the previous articles, I am using data from the General Social Survey (GSS), and in particular the variable ‘gunlaw’, which records responses to the question:

I characterize respondents who answer “favor” to be more likely to support strict gun control laws.

The explanatory factors I consider are:

‘female’: indicates that the respondent is female.

‘black’: indicates that the respondent is black.

‘otherrace’: indicates that the respondent is neither white nor black (most people in this category are mixed race).

‘hispanic’: indicates that the respondent is Hispanic.

‘conservative’, ‘liberal’: indicates that the respondent reports being conservative or liberal (not moderate).

‘lowrealinc’, ‘highrealinc’: indicates that the respondent’s household income is in the bottom or top 25%, based on self-report, converted to constant dollars.

‘college’: indicates whether the respondent attended any college.

‘urban’, ‘rural’: indicates whether the respondent lives in an urban or rural area (not suburban).

‘gunhome’: indicates whether the respondent reports that they “have in [their] home or garage any guns or revolvers”.

‘threatened’: indicates whether the respondent reports that they have “ever been threatened with a gun, or shot at”.

I used logistic regression to estimate the effect of each of these variables.  The regression also includes a cubic model of time, intended to capture the period effect.  You can see the period effect in the following figure, which shows actual changes in support for a gun permit law over the history of the GSS (in gray) and the retroactive predictions of the model (in red). 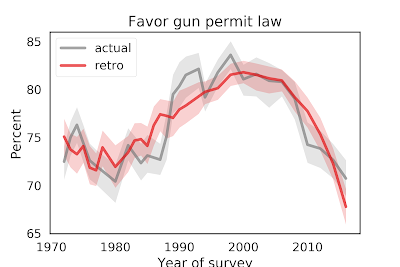 To present the results in an interpretable form, I define a collection of hypothetical people with different attributes and estimate the probability that each one would favor a gun permit law.

As a baseline, I start with a white, non-Hispanic male born in the 1960s who is politically moderate, in the middle 50% of the income range, who attended college, lives in a suburb, has never been threatened with a gun or shot at, and does not have a gun at home.  People like that interviewed in 2016 have a 74% chance of favoring “a law which would require a person to obtain a police permit before he or she could buy a gun”.

These results are generated by running 201 random samples from the GSS data and computing the median, 2.5th and 97.5th percentiles.  The range from ‘low2.5’ to ‘high97.5’ forms a 95% confidence interval.

Again, the hypothetical baseline person has a 74% chance of favoring a gun permit law.  A nearly identical person born in the 1990s has only a 64% chance.

To see this and the other effects more clearly, I computed the difference between each hypothetical person and the baseline, then sorted by the magnitude of the apparent effect.

All else being equal, someone who owns a gun is about 20 percentage points less likely to favor gun permit laws.

Compared to suburbanites, people in rural and urban communities are less likely, by 12 and 5 points.

Blacks and other non-whites are more likely to favor gun permit laws, by 4.5 and 7 percentage points.

Controlling for all of these factors, the period effect persists: people with the same attributes surveyed 10, 20, 30, and 40 years ago would have been 10, 10, 7, and 5 points more likely to favor gun permit laws.

In these results, Hispanics are not significantly different from non-Hispanic whites.  But because of the way the GSS asked about Hispanic background, this variable is missing a lot of data; these results might not mean much.

Surprisingly, people who report that they have been “threatened with a gun or shot at” are 2 percentage points LESS likely to favor gun permit laws.  This effect is small but statistically significant, and it is consistent in many versions of the model.  A possible explanation is that this variable captures information about the respondent’s relationship with guns that is not captured by other variables.  For example, if a respondent does not have a gun at home, but spends time around people who do, they might be more likely to have been threatened and also more likely to share cultural values with gun owners.  Alternatively, since this question was only asked until 1996, it’s possible that it is capturing a period effect, at least in part.

“Lowest combo” represents a hypothetical person with all attributes associated with lower support for gun laws: a white conservative male born in the 1990s, living in a rural area, with household income in the lowest 25%, who has not attended college, who owns a gun, and has been threatened with a gun or shot at.  Such a person has a 19% change of favoring a gun permit law, 54 points lower than the baseline.

“Highest combo” represents a hypothetical person with all attributes associated with higher support for gun laws: a mixed race liberal woman born in the 1960s or before, living in a suburb, with household income in the highest 25%, who has attended college, does not own a gun, and has not been threatened with one.  Such a person has a 92% chance of favoring a gun permit law, 19 points higher than the baseline.

[You might be surprised that these results as asymmetric: that is, that the lowest combo is farther from the baseline than the highest combo.  The reason is that the “distance” between probabilities is not linear.  For more about that, see my previous article on the challenges of interpreting probablistic predictions].

The entire analysis in this Jupyter notebook.  The steps are:

1) Load the subset of GSS data I selected, which you can download here.

2) For each year of the survey, use weighted bootstrap to select a random sample that accounts for the stratified sampling in the GSS design.

3) Fill missing values in each column by drawing random samples from the valid responses.

6) Use the model to make predictions for each of the hypothetical people in the tables, in terms of probabilities.

7) Compute the predicted difference between each hypothetical person and the baseline.

By repeating steps (2) through (7) about 200 times, we get a distribution of estimates that accounts for uncertainty due to random sampling and missing values.  From these distributions, we can select the median and a 95% confidence interval, as reported in the tables above.