The following code creates and manipulates 2 TB of randomly generated data. On a single CPU, this computation takes two hours....

On a single CPU, this computation takes two hours.

On an eight-GPU single-node system this computation takes nineteen seconds.

Actually this computation isn’t that impressive. It’s a simple workload, for which most of the time is spent creating and destroying random data. The computation and communication patterns are simple, reflecting the simplicity commonly found in data processing workloads.

What is impressive is that we were able to create a distributed parallel GPU array quickly by composing these three existing libraries:

These tools already exist. We had to connect them together with a small amount of glue code and minor modifications. By mashing these tools together we can quickly build and switch between different architectures to explore what is best for our application.

For this example we relied on the following changes upstream:

We can now easily run some experiments on different architectures. This is easy because …

These libraries allow us to quickly judge the costs of this computation for the following hardware choices:

We present code for these four choices below, but first, we present a table of results. 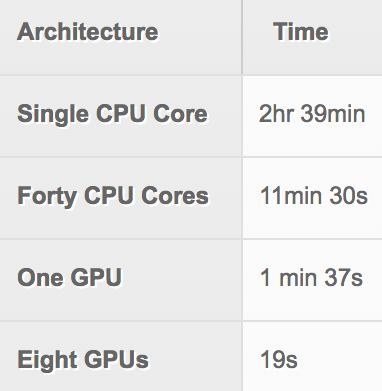 We switch from CPU to GPU by changing our data source to generate CuPy arrays rather than NumPy arrays. Everything else should more or less work the same without special handling for CuPy.

(This actually isn’t true yet, many things in dask.array will break for non-NumPy arrays, but we’re working on it actively both within Dask, within NumPy, and within the GPU array libraries. Regardless, everything in this example works fine.)

And again, here are the results: 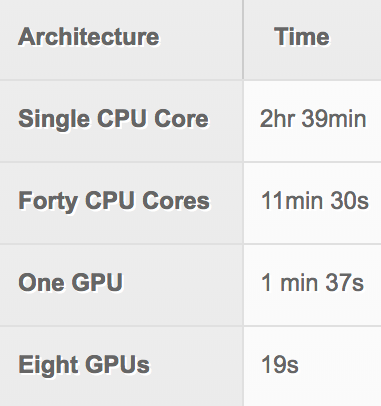 Although later on it did dive down to around 5000–6000%, and if you do the math you’ll see that we’re not getting a 40x speedup. My guess is that performance would improve if we were to play with some mixture of threads and processes, like having ten processes with eight threads each.

The jump from the biggest multi-core CPU to a single GPU is still an order of magnitude though. The jump to multi-GPU is another order of magnitude, and brings the computation down to 19s, which is short enough that I’m willing to wait for it to finish before walking away from my computer.

Actually, it’s quite fun to watch on the dashboard (especially after you’ve been waiting for three hours for the sequential solution to run):

This computation was simple, but the range in architecture just explored was extensive. We swapped out the underlying architecture from CPU to GPU (which had an entirely different codebase) and tried both multi-core CPU parallelism as well as multi-GPU many-core parallelism.

We did this in less than twenty lines of code, making this experiment something that an undergraduate student or other novice could perform at home. We’re approaching a point where experimenting with multi-GPU systems is approachable to non-experts (at least for array computing).

Here is a notebook for the experiment above

[Related Article: Beyond Numpy Arrays in Python: Preparing the Ecosystem for GPU, Distributed, and Sparse Arrays]

We can work to expand the computation above in a variety of directions. There is a ton of work we still have to do to make this reliable.

1. Use more complex array computing workloads
The Dask Array algorithms were designed first around Numpy. We’ve only recently started making them more generic to other kinds of arrays (like GPU arrays, sparse arrays, and so on). As a result there are still many bugs when exploring these non-Numpy workloads.
For example if you were to switch sum for mean in the computation above you would get an error because our mean computation contains an easy to fix error that assumes Numpy arrays exactly.

2. Use Pandas and cuDF instead of Numpy and CuPy
The cuDF library aims to reimplement the Pandas API on the GPU, much like how CuPy reimplements the NumPy API. Using Dask DataFrame with cuDF will require some work on both sides, but is quite doable.
I believe that there is plenty of low-hanging fruit here.

3. Improve and move LocalCUDACluster
The LocalCUDAClutster class used above is an experimental Cluster type that creates as many workers locally as you have GPUs, and assigns each worker to prefer a different GPU. This makes it easy for people to load balance across GPUs on a single-node system without thinking too much about it. This appears to be a common pain-point in the ecosystem today.
However, the LocalCUDACluster probably shouldn’t live in the dask/distributed repository (it seems too CUDA specific) so will probably move to some dask-cuda repository. Additionally there are still many questions about how to handle concurrency on top of GPUs, balancing between CPU cores and GPU cores, and so on.

4. Multi-node computation
There’s no reason that we couldn’t accelerate computations like these further by using multiple multi-GPU nodes. This is doable today with manual setup, but we should also improve the existing deployment solutions dask-kubernetes, dask-yarn, and dask-jobqueue, to make this easier for non-experts who want to use a cluster of multi-GPU resources.

5. Expense
The machine I ran this on is expensive. Well, it’s nowhere close to as expensive to own and operate as a traditional cluster that you would need for these kinds of results, but it’s still well beyond the price point of a hobbyist or student.
It would be useful to run this on a more budget system to get a sense of the tradeoffs on more reasonably priced systems. I should probably also learn more about provisioning GPUs on the cloud.

If the work above sounds interesting to you then come help! There is a lot of low-hanging and high impact work to do.

If you’re interested in being paid to focus more on these topics, then consider applying for a job. The NVIDIA corporation is hiring around the use of Dask with GPUs.