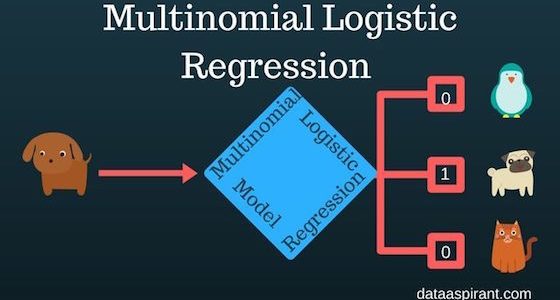 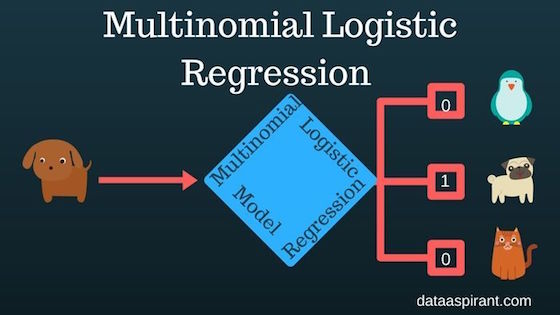 I recommend first to check out the how the logistic regression classifier works article and the Softmax vs Sigmoid functions article before you read this article.

Learn each and every stage of multinomial logistic regression classifier.CLICK TO TWEET

Before we start the drive, let’s look at the table of contents of this article.

What is Logistic Regression?

If you were not aware of the logits and the basic linear regression model techniques don’t be frightened. In the coming sections. We are going to learn each block of multinomial logistic regression from inputs to the target output representation.

As we discussed earlier the logistic regression model are categorized based on the number of target classes and uses the proper functions like sigmoid or softmax functions to predict the target class.

To learn more about sigmoid and softmax functions checkout difference between softmax and sigmoid functions article.

What is Multinomial Logistic Regression?

The underline technique will be same like the logistic regression for binary classification until calculating the probabilities for each target. Once the probabilities were calculated. We need to transfer them into one hot encoding and uses the cross entropy methods in the training process for getting the proper weights.

Before that lets quickly check few examples to understand what kind of problems we can solve using the multinomial logistic regression.

The keynote to remember here is the features values always numerical. If the features are not numerical, we need to convert them into numerical values using the proper categorical data analysis techniques.

The weights w1, w2, w3, w4 will update in the training phase. We will learn about this in the parameters optimization section of this article.

The Logits also called as scores. These are just the outputs of the linear model. The Logits will change with the changes in the calculated weights.

Keynote: The Logits and the probabilities in the image were just for the purpose of understanding the multinomial logistic regression model. The values are not the real values computed using the softmax function.

Below are the few properties of softmax function.

If we observe the function output for the input value 6 we are getting the high probabilities. This is what we can expect from the softmax function. Later in classification task, we can use the high probability value for predicting the target class for the given input features.

The cross entropy is the last stage of multinomial logistic regression. Uses the cross-entropy function to find the similarity distance between the probabilities calculated from the softmax function and the target one-hot-encoding matrix.

Before we learn more about Cross Entropy, let’s understand what it is mean by One-Hot-Encoding matrix.

One-Hot Encoding is a method to represent the target values or categorical attributes into a binary representation. From this article main image, where the input is the dog image, the target having 3 possible outcomes like bird, dog, cat.  Where you can find the one-hot-encoding matrix like [0, 1, 0].

Suppose if we have 3 input features like x1, x2, and x3 and one target variable (With 3 target classes). Then the one-hot-encoding matrix will have 3 values. Out of 3 values, one value will be 1 and all other will be 0s.

With this, we discussed each stage of the multinomial logistic regression. All the stages/ workflow will happen for each observation in the training set.

Observation: Single observation is just the single row values from the traging set. Which contains the features and the correspoinding target class.

For each observation in the training set will pass through the all the stages of multinomial logistic regression and the proper weights W (w1, w2, w3) values will be computed. How the weights calculated and update the weights is know as the Parameters Optimization.

This Parameters optimization is an iteration process where the calculated weights for each observation used to calculate the cost function which is also known as the Loss function.

The Iteration process ends when the loss function value is less or significantly negligible. Now let’s learn about this loss function to sign off from this lengthy article ?

The process will continue until the loss function value is less.

This is the whole process of multinomial logistic regression. If you are thinking, it will be hard to implement the loss function and coding the entire workflow. Don’t frighten. We were so lucky to have the machine learning libraries like scikit-learn. Which performs all this workflow for us and returns the calculated weights.

In the next article, we are going to implement the logistic regression model using the scikit-learn library to perform the multiclassification task.

This article gives the clear explanation on the each stage of multinomial logistic regression. Below are the discussed workflow or stages.

I hope you like this post. If you have any questions, then feel free to navigate to the original here and comment. If you want me to write on one particular topic, then do tell it to me in that comment area.

Saimadhu Polamuri is a self-taught data scientist and Indian blogger at dataaspirant.com on data science field. His blog dataaspirant.com was posted as best blog for data science along with LinkedIn data science group. He is more passionate and curious about data science. He believes learning means living. He has Expert fluency in Python language and he loves to code with the headset on. His spare time activity was answering questions on quora.