AI is the big thing in investing right now. The internet abounds with posts about the explosive growth of machine learning...

AI is the big thing in investing right now. The internet abounds with posts about the explosive growth of machine learning and AI, with implicit (or explicit) messages trying to persuade readers to invest in some hot startup or tech. This isn’t another one of those posts. Rather, it’s a “how to” for those (like myself) with limited background in finance, but an interest in getting some skin in the game. And when I say “some,” I mean as little as $50 or less. If this sounds like you, read on and learn to invest in AI!

If we’re to start investing, we’ll need a tool that allows us to buy and trade securities (a tradable financial asset, like stocks and bonds). Most people think you need a lot of money to make that happen. In 2018, though, that’s no longer the case. A slew of online brokerages (financial companies that allow for trading securities) have been trying to “democratize investing” by offering users cheap and easy-to-use interfaces to get started. The most popular is probably Robinhood, which has attracted over 3 million users on its remarkably simple phone and web apps which support free, “commissionless” trading of US-listed stocks, funds, and ETFs (more on this later). Essentially, you can transfer money from your bank which becomes “buying power” in the app that can be used to buy securities. While you can pay for RobinHood’s premium service, Robinhood Gold, to gain some expanded trading features, I’ve found that the free service offers everything I need. There are many good guides on YouTube for getting started with RobinHood, like this one. If you do sign up, see if any of your friends are already on the app and can send you a referral code, as you’ll get a free stock – worth $10 or so on average – for joining.

Now that we’re set up on Robinhood (or another brokerage), it’s time to see what our options are when it comes to AI. An investment ‘vehicle’ just means a financial product that intends to generate a return. A share of a company’s stock (representing a small piece of ownership of that company) is one of the most common vehicles that we can buy.

A few companies dominate the AI landscape, and buying their stock is certainly one approach to investing in AI. Patents related to AI and machine learning have grown 34% annually over the past few years, with IBM, Microsoft, Alphabet (Google), Facebook, and Tesla in the lead. Keep in mind, though, that these companies only derive a fraction of their revenues and profits from AI. In other words, buying a share of Tesla represents an investment in self-driving capabilities, but also in all of Tesla’s other initiatives related to electric vehicles.

In general, there are a lot of drawbacks to picking individual stocks. First, it’s very risky. Not only can individual companies suffer from internal problems that lead to their abrupt downfall, they’re also vulnerable to the ups and downs of global markets. If history is any teacher, tech is particularly vulnerable in this regard. And more pertinent to us, most of these stocks are well beyond our price range. A single share of Amazon, for example, was trading at a whopping $1880 in mid-August!

For smaller-scale investors, exchange-traded funds (ETFs) offer an attractive alternative to stock-picking. Essentially, ETFs are just bundles of securities that trade as though they were individual stocks. By pooling a lot of people’s resources together, the ETF can invest in many companies, such that a single share of the ETF represents some investment in each of them. So rather than buying a share of Amazon, we can buy a much cheaper ETF which is composed of some portion of Amazon shares. Plus, we get the added advantage of some diversification within our investment, meaning that (in principle) we’re not as vulnerable to the ups and downs of individual firms within the fund. The price we pay for these benefits is an ETF’s “expense ratio,” which is the percentage of our invested money that goes to the asset manager (the company that builds and manages the fund) on an annual basis. Many ETFs have very low expense ratios (less than 0.1% in some cases), but that cost is still something to take seriously, especially if you’re investing for the long run. In general, here are some pros and cons of ETFs to consider:

Pros: ETFs offer a relatively cheap way to gain exposure to a lot of different companies. They’re easy to buy and sell like stocks, and they take much less effort than choosing many individual stocks on your own.

Cons: ETFs, particularly themed ones like those we’ll look at below, don’t offer as much diversification as you think. Should the AI market go down, they’re likely to take huge hits. In addition, themed ETFs have relatively high expense ratios.

On balance, given our ~$50 budget, ETFs seem like our best option. Let’s see what’s out there to capture the booming field of AI and machine learning.

Recently, a slew of new “themed” ETFs have cropped up centered around AI. In other words, asset managers have spent time picking the companies that they think best reflect the growth of AI and machine learning, and now offer ETFs composed of shares of all of them (in different proportions). Each one is different, with different holdings, expense ratios, and focus areas (such as the countries they focus on, or the number of companies they hold). Robinhood hosts a number of AI-themed ETFs, and here are a few of the well-known ones for us to consider:

1. Global X Robotics & Artificial Intelligence ETF (BOTZ): This is an ETF run by New York-based asset manager Global X that opened in 2016 “to invest in companies that potentially stand to benefit from increased adoption and utilization of robotics and artificial intelligence (AI).” Nvidia is one of its largest holdings, but it also has a strong focus on lesser-known Japanese firms working in AI. The fund manages over $2.3 billion and has an expense ratio of 0.68%. In mid-August, it was trading at around $22 per share. 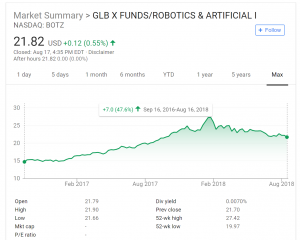 2. Robo Global Robotics & Automation ETF (ROBO): This ETF is run by Dallas-based asset manager ROBO Global. It’s a lot like BOTZ, but goes back a bit earlier to 2013. Almost all of the companies in BOTZ are in ROBO, but ROBO has roughly twice as many companies in its holdings overall, with more companies outside of Asia. This gives it some added diversity, but it comes with a higher expense ratio at 0.95%. The fund also has about $2.3 billion under management. In mid-August, it was trading at around $40 per share. 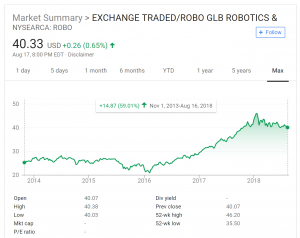 3. First Trust Nasdaq Artificial Intelligence and Robotics ETF (ROBT): The newest comer in this list, ROBT comes from Chicago-based asset manager First Trust Portfolios. It started trading in February 2018 (it’s so new, in fact, that it’s not listed on Google finance, so I had to pull its performance data from etf.com). With 98 holdings, it looks very similar to ROBO, although ROBT includes some big American AI players like Apple and AMD that aren’t in ROBO. As the newest in this bunch, it has the smallest amount under management (~$18 million), and also the lowest expense ratio at 0.65%. In mid-August, it was trading at around $33 per share. 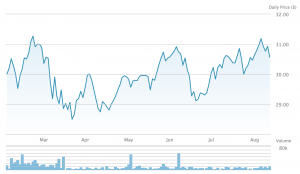 And there you have it. With one of these ETFs in our portfolio, we’ve made an investment in companies driving the growth of AI and machine learning. Whether or not it’s a good one, only time will tell.