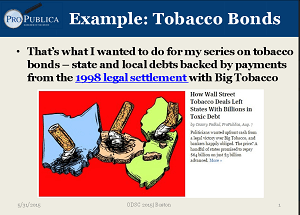 Open data is enabling journalists, watchdog groups and investors to gain more insight than ever before into the finances of state and local governments. Unfortunately, much of it remains trapped inside bulky PDFs, lagging annual reports and other data-rich documents that are challenging to collect and analyze. At this session, ProPublica finance reporter Cezary Podkul will walk through an example of the obstacles he faced analyzing bond documents for a series of stories he did on municipal borrowing. The second half of the session will feature Sunlight Foundation OpenGov grant recipient Marc Joffe, who will discuss opportunities for liberating municipal finance data for journalists, watchdogs and investors alike.

Presenter Bios
Cezary Podkul is a reporter at ProPublica covering finance. Previously, he worked as a reporter at Reuters specializing in data-driven news stories. His work with Carrick Mollenkamp for Reuters’s “Uneasy Money” series was a finalist for the Gerald Loeb Award for Distinguished Business and Financial Journalism. He has covered energy and commodities and the private equity industry, among other beats, after leaving investment banking in 2008 to pursue journalism.

Marc Joffe is principal consultant at Public Sector Credit Solutions, which he founded in 2011 to educate the public about the risk of government bonds. Previously, he was a senior director at Moody’s Analytics. He co-authored a 2013 study for the California Debt and Investment Advisory Commission entitled Assessing Municipal Bond Default Probabilities. Joffe has also performed simulation analyses of government debt for the Macdonald-Laurier Institute in Ottawa and for the Mercatus Center at George Mason University. He has an MBA from New York University and an MPA from San Francisco State University.