We all make mistakes, and as is often said, only then can we learn. Our mistakes allow us to gain insight, and the ability to...

We all make mistakes, and as is often said, only then can we learn. Our mistakes allow us to gain insight, and the ability to make better judgements and fewer mistakes in future. In their influential paper, the neuroscientists Robert Rescorla and Allan Wagner put this more succinctly, ‘organisms only learn when events violate their expectations’ [1]. And so too of learning in machines. In both brains and machines we learn by trading the currency of violated expectations: mistakes that are represented as prediction errors.

We rely on predictions to aid every part of our decision-making. We make predictions about the position of objects as they fall to catch them, the emotional state of other people to set the tone of our conversations, the future behaviour of economic indicators, and of the potentially adverse effects of new medical treatments. Of the multitude of prediction problems that exist, the prediction of rewards is one of the most fundamental and one that brains are especially good at. This post explores the neuroscience and mathematics of rewards, and the mutual inspirations these fields offer us for the understanding and design of intelligent systems.

Associative Learning in the Brain

A reward, like the affirmation of a parent or the pleasure of eating something sweet, is the positive value we associate to events that are in some way beneficial (for survival or pleasure). We quickly learn to identify states and actions that lead to rewards, and constantly adapt our behaviours to maximise them. This is an ability known as associative learning and leads us, in the framework of Marr’s levels of analysis, to an important computational problem: what is the principle of associative learning in brains and machines?

As modern-day neuroscientists, the tools with which we can interrogate the function of the brain are many: psychological experiments, functional magnetic resonance imaging, pharmacological interventions, single-cell neural recordings, fast-scan cyclic voltammetry, optogenetics; all provide us with a rich implementation-level understanding of associative learning at many levels of granularity. A tale of discovery using these tools unfolds. 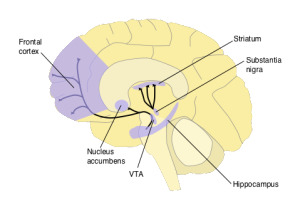 Dopamine pathways in the brain [Wikimedia].

The striatum is special since it is a major target of the neurotransmitter dopamine, and leads to the sneaking suspicion that dopamine plays an important role in reward-based learning. This suspicion is substantiated through a series of pharmacological experiments using neuroleptic drugs (dopamine antagonists). Without dopamine the the normal function of associative learning is noticeably impeded [3]. Neurons in the brain that use dopamine as a neurotransmitter are referred to as dopaminergic neurons. Such neurons are concentrated in the midbrain and are a part of several pathways. The nigrostriatal pathway links the substantia nigra (SN) with the striatum, and the mesolimbic pathway links the ventral tegmental area (VTA) with the forebrain (see image).

When single-cell recordings of dopaminergic neurons are made from awake monkeys as they reach for a rewarding sip of juice, after seeing a cue (e.g., a light), there is a distinct dopaminergic response [4]. When this reward is first experienced, there is a clear response from dopaminergic neurons, but this fades after a number of trials. The implication is that dopamine is not a representation of reward in the brain. Instead, dopamine was proposed as a means of representing the error made in predicting rewards. A means of causally manipulating multiple neurons is needed to verify such a hypothesis. Optogenetics offers  exactly such a tool, and provides a means stimulating precise neural-firing patterns in collections of neurons and observing them by creating a light-activated ion channel. Using optogenetic activation, dopamine neurons were selectively triggered in rats to mimic the effect of positive prediction error, and allowed a causal link between prediction errors, dopamine and learning to be established [5].

And so goes the reward-prediction error hypothesis: ‘the fluctuating delivery of dopamine from the VTA to cortical and subcortical target structures in part delivers information about prediction errors between the expected amount of reward and the actual reward‘ [6]. There isn’t unanimous acceptance of this hypothesis and  incentive salience is one alternative [7]. There is a need for a review that includes the recent evidence that has accumulated, but the existing surveys remain insightful:

The reward-prediction error hypothesis is compelling. With support from ever-increasing evidence, we have established the computational problem of associative learning in the brain, an algorithmic solution that predicates learning on prediction errors, and an implementation in brains through the phasic activity of dopaminergic neurons. How can this learning strategy can be used by machines?

Reinforcement learning—the machine learning of rewards—provides us with the mathematical framework with which we can understand and provide an algorithmic specification of the computational problem of associative learning. As agents in the world, we observe the state of the world s, can take an action a, and observe rewards r, and we do this continually (a perception-action loop). In reinforcement learning the associative learning problem is known as value learning, and involves learning about two types of value function: state value functions and state-action value functions.

These equations embody our computational problem: