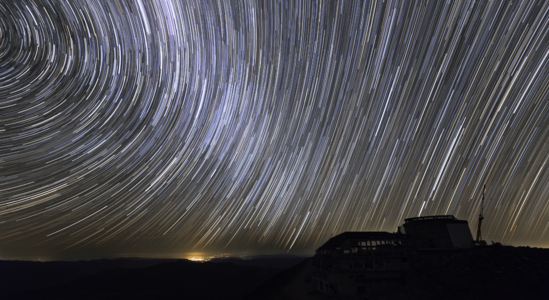 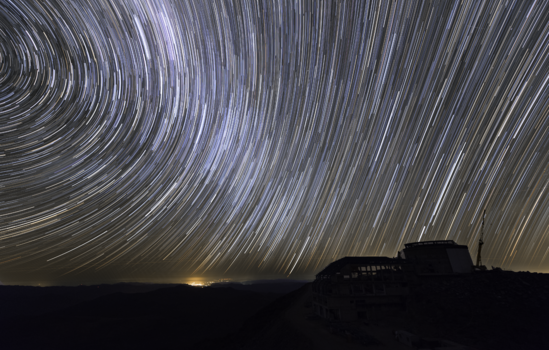 Make Sense of the Universe with Rapids.AI

Kaggle2 Machine Learning112
Classification of astronomical sources in the night sky is important for understanding the universe. It helps us understand the properties of...

Classification of astronomical sources in the night sky is important for understanding the universe. It helps us understand the properties of what makes up celestial systems from our solar system to the most distant galaxy and everything in between. The Photometric LSST Astronomical Time-Series Classification Challenge (PLAsTiCC) wanted to revolutionize the field by automatically classify 10–100x faster than previous methods and provided Kagglers a great dataset for solving this Kaggle problem using machine learning. I am honored to represent RAPIDS.ai for this competition and ended up with 8th place out of 1094 teams! My solution achieved an up to 140x speedup for ETL and 25x end-to-end speedup over the CPU solution. Here is the story how we make sense of the universe in a RAPIDS way 🚀.

For hundreds of years, astronomers have developed many ways to discern different types of stars, ranging from the naked human eyes to today’s method of spectroscopy analysis. Spectroscopy analysis uses the modern telescope to extract the exact fingerprint of the astrophysical sources by dispersing the beam of light into a spectrum and finding out what wavelength is missing. Unfortunately, this type of analysis takes so much time that it can’t keep up with the enormous 40 Terabytes data per night data rate that the new Large Synoptic Survey Telescope (LSST) generates. This is where machine learning comes into play to learn the pattern from the light curves data directly. However, it is still very challenging to ingest such a big data in real time. We believe GPU is the most promising solution to this problem as my end-to-end GPU demo takes only 40 seconds to process 20 gigabytes data!

In this Kaggle challenge, a training data set of 7000 objects and a test data set of 3 million objects are provided. For each object there are two types of information: 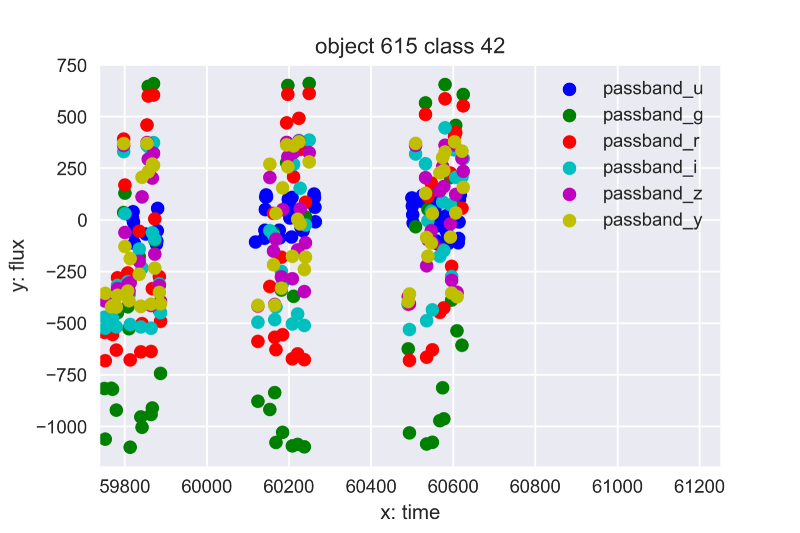 The light curve time series by LSST of object 615 with all six passbands.

The light curve time series is the most critical information for solving the puzzle. There are some common challenges with time series classification, like: 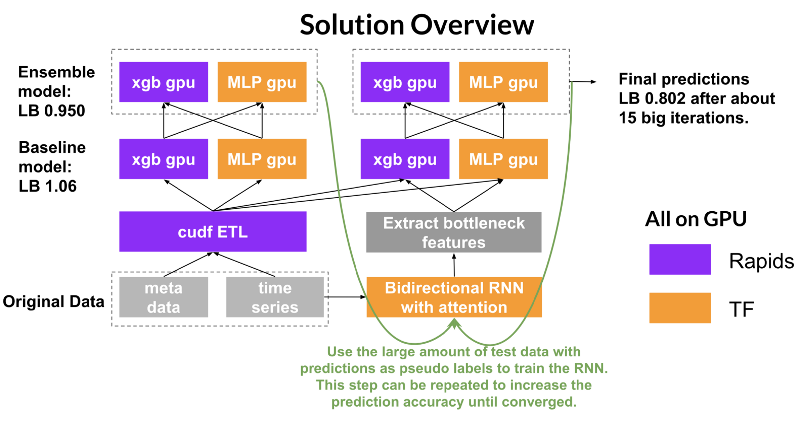 An all-GPU solution is implemented with Rapids.ai libraries and tensorflow:

2. Train base classifiers of Xgboost and multi-layer perceptron (MLP) with features from Step 1.

3. Use predictions from Step 2 as features and train stack models.

4. Use the predictions of test data from step 3 as pseudo labels to train a bidirectional recurrent neural network (RNN) and extract the bottleneck features with attention, which are weighted sum of all hidden states of RNN cells.

5. Use the bottleneck features of step 4 along with features from step 1 to train Xgboost and MLP again.

6. Use predictions from step 5 as features and train stack models to get final predictions.

7/ Repeat steps 1 to 6 until the hold out validation accuracy converges.

RAPIDS’ cudf is crucial to efficient feature engineering and feature selection thanks to its amazing performance using GPUs. The main features built are statistical metrics (mean, max, etc) that summarize each object’s light curve characteristics with the groupby-aggregation operation. The input data is a dataframe with light curves of all the objects. The groupby-aggregation operation splits the dataframe based on the object ID, processes each object’s light curve independently and combines the summarized results back to one dataframe, which is ready for the classifier.

The GPU based cudf achieves amazing speedup compared to the CPU based pandas. In general, it is at least 10x faster for reading data and groupby aggregation. For the best case, groupby and aggregation with skewfunction, cudf achieves 120x~140x speedup!! Although the skew function is not supported directly by cudf, I implemented a workaround with cudf’s apply_grouped primitives and numba to write GPU kernel functions.

The apply_grouped method launches one kernel, compute_skew in this case, for each group in parallel. In other words, all we need to implement iscompute_skew and everything else is taken care of by cudf. This is a great example that showcases both the performance and the flexibility of cudf.

Such speedup brought by RAPIDS is the key to ingest the enormous data generated by LSST in real time. It is also extremely useful to improve data scientists’ efficiency, which allows fast iterative experimenting of ETL, feature selection, and practically every step of the machine learning pipeline. Eventually, these features are fed to a GPU version of the Xgboost classifier and it can already achieve 80% accuracy of the final complex ensemble. The details of features can be found in the demo notebook at the beginning of the blog.

With the solid feature engineering, I created several good base models that can place in top 10% of the competition. To break into top 1%, some of the most effective kaggle tricks were employed: stacking and semi-supervised self-training.

Stacking is a non-linear ensemble technique where new features are generated from the base models’ predictions in a cross validation manner. 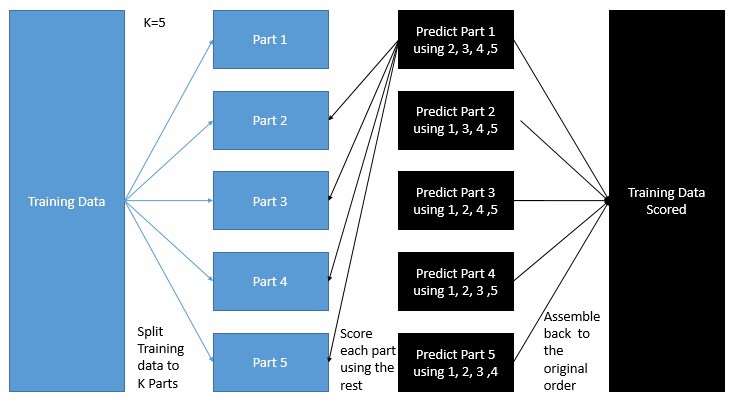 Rapids is so fast and powerful that sometimes I forgot it is only three months old. What I don’t forget is its great potential and we can definitely improve rapids with the valuable lessons learned from the competition.

1. Better GPU memory management. The main challenge of this competition is to handle the big data size. With a single GPU, out-of-memory error (OOM) is very likely to occur. To prevent such OOM errors, several tricks are utilized such as manually moving data back and forth between host and device, deleting columns immediately after operations and so on. Despite being effective and relatively low-overhead, such tricks still burden users with hardware details. Instead, we are working on dask-cudfintegration where large dataframes can be transparently ingested and manipulated in an out-of-core chunked manner.

2. More functionalities. Kaggle competitions are all about distilling the last bit of useful information from data to push the accuracy. Hence kagglers crave every possible functions to transform the data from a different angle. For example, groupby-aggregation is the most common ETL trick which summarizes a group’s behavior by calculating a certain statistical metric. Currently some aggregation functions are not supported yet by rapids such as median. Workarounds for these functions can be implemented with cudf’s apply_grouped primitives and numba but there are definitely room for improvement.

3. Consistency, readability, and everything else. Sometimes so much time can be saved from digging in the documents if the functions have consistent patterns and the error messages are straightforward. For example, most of the cudf’s functions return a dataframe or data series except for drop_column and reset_index, which are in place by default. We can either make them consistent or help users realize the difference with better naming of the functions or better error message.

This competition is a fantastic learning process for me. Without any astronomical background, I achieved amazing results through systematic iterative trial and error. And it is not possible without the lightspeed rapids.ailibrary. This reminds me why I love machine learning in the first place: with enough data, the right library, and massive computing power, the model can be (almost) as good as any domain experts 😃.