On the last day of ODSC East, a group of speakers kicked off a new tradition at ODSC, one that celebrates the achievements and...

On the last day of ODSC East, a group of speakers kicked off a new tradition at ODSC, one that celebrates the achievements and prowess of some of the data science community’s brightest minds.

On Friday afternoon, the inaugural Women in Data Science Ignite event kicked off with a full room of observers waiting to hear the diverse panel of women give 7-minute-long keynotes on various topics ranging from social media marketing strategy to Alzheimer’s diagnoses. First to speak was Lenka Kovalcinova, UX Quantitative Researcher at Google.

Kovalcinova’s talk began with a history brief on the trajectory of language processing in society, starting from Descartes and Leibniz on the theory of relating language up to the current standards of machine learning. She continued by describing the best practices for natural language processing, which can be used to gain one-sentence insights from data.

Next up at the podium was Jamie Warner, the Director of Data Science at Lincoln Financial. Warner’s presentation was loaded with hilarious anecdotes that won the room over, especially considering the jokes were geared toward data science savants. She detailed the issues that occur when highly regulated industries like her own oversee machine learning projects. Things like technical stakeholders, legacy systems, and gut feelings from executives can often stunt the workflow of a machine learning project. 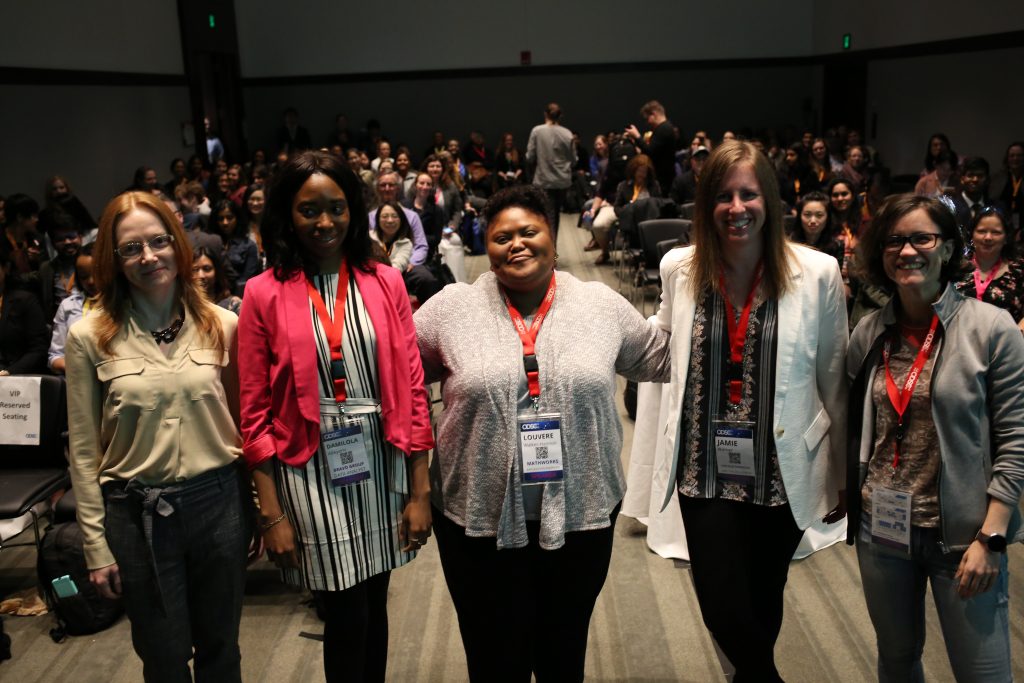 Louvere Walker-Hannon, an App Engineer at MathWorks was next onstage, and gave a presentation on the importance of educating young female programmers to give them a head start in the world of data science. Walker-Hannon emphasized the importance of connecting young women with both women and underrepresented groups through artificial intelligence training sessions.

At the Grace Hopper Celebration of Women in Computing in Houston last year, Walker-Hannon and several of her colleagues at MathWorks organized an AI workshop attended by more than 500 participants. The workshop explored object recognition and classification using deep learning. Since then, 100 workshop team members delivered workshops to over 2000 participants worldwide.

“The feedback was glowing—not only did attendees learn about concepts and tools in AI, but they also had fun,” Walker-Hannon said.

Damilola Adeyemi, Data Analyst at Bravo Group, was next to present her lightning talk. As the sole data analyst at Bravo Group, an independent public relations firm, Adeyemi has the important task of collecting, analyzing, and organizing data that her team can use for insights. Adeyemi spoke about the benefits of living in the social media age, such as the ability to integrate marketing strategies, estimate outcomes from ads, and find patterns in emails using regression models.

Last but certainly not least, Jekaterina Novikova, Director of Machine Learning at Winterlight Labs, spoke about diagnosing Alzheimer’s Disease with the help of machine learning.

While Alzheimer’s Disease is an irreversible neurodegenerative disorder, detecting it early enough to take the proper steps for rehabilitation and prevention is key to making the lives of those with AD and loved ones around them a bit easier. Novikova explained how she extracts features like pitch to transcripts, and feeds them into her semi-supervised predictive model to classify which behavior may be used as flags for Alzheimer’s Disease. While the model isn’t perfect right now, it could be the next step in fighting the effects of AD.

The Women in Data Science Ignite Talks was surely a highlight of the entire conference. With a packed room full of eager ears and even more eager minds, it was a pleasure hearing every speaker talk. If next year’s event shapes up to be like this year’s, ODSC is in for an inspiring new tradition.

I’m a freelance data journalist based in Boston, MA. Formally trained in both data science and journalism at Boston University, I aspire to make working with data easy and fun. If you work in a newsroom or if you’re just data-curious, I hope to help you explore data clearly. https://www.kailenjsantos.wordpress.com/

Image Detection as a Service

Across our two brands, Badoo and Bumble, we have over 500 million registered users worldwide uploading millions of photos...

I had the pleasure of presenting at eight ODSC events so far. Every time, there is something special on...