Life|Neural Networks1
Recently, I have been exploring the creative side of artificial neural networks. People have been wondering what these mysterious models can...

The art industry seem to feel immune to the idea that AI could replace all of our jobs. However, the mysterious behaviour of neural networks do make way for some undeniable creativity. Having said that, I do not believe this alone can even begin to match what humans produce in any area of the art industry. I have now seen many examples of art produced by machine learning methods, and have found myself intrigued, impressed, unimpressed, and humoured. In this article, I want to take time looking at the results of neural networks, and not the neural networks themselves. I will assume you understand what they are, and vaguely how they work. Feel free to read my previous posts to better understand the workings of these amazing models.

It is important to recognise that the art created by standard computer algorithms is not the same as the art produced by artificial intelligence. Here is a piece of abstract art made by a simple algorithm. 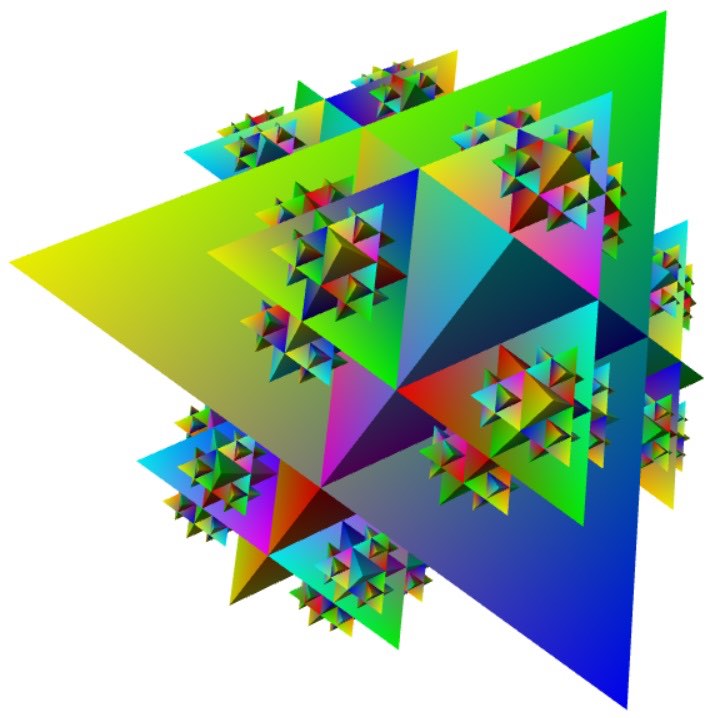 This is algorithmic art. The kind of art you would expect a computer to produce. The kind you probably don’t take very seriously. It is made based on a set of simple rules, written by a programmer. Art produced by convolutional neural networks are a completely different story. A convolutional neural network (or a CNN) is a neural network with a higher dimension of spatial observation. CNNs are the most successful type of machine learning methods used for all intelligent computer vision features.

The reason algorithmic art is less interesting when exploring a computer’s ability in creativity,  is because they require complete direction, and need to be told exactly what to look like. A more interesting step away from this is supervised machine learning, where art being produced has an aim, but is using thousands of sources of pictures (perhaps previous art, or just general photos). However the supervision aspect means that it’s being corrected and adjusted based on a particular target. Finally, there are unsupervised machine learning techniques. These being the most creative methods. All we need to do is give a CNN a huge source of photos, and it will create something entirely from it’s own ability to observe and to find incomprehensible patterns. This is very similar to how we produce art, where our source is everything we see, and our production is based on our own abstract but meaningful interpretation.

This photo is produced by Google’s DeepDream program. A powerful CNN, being left to its own accord. 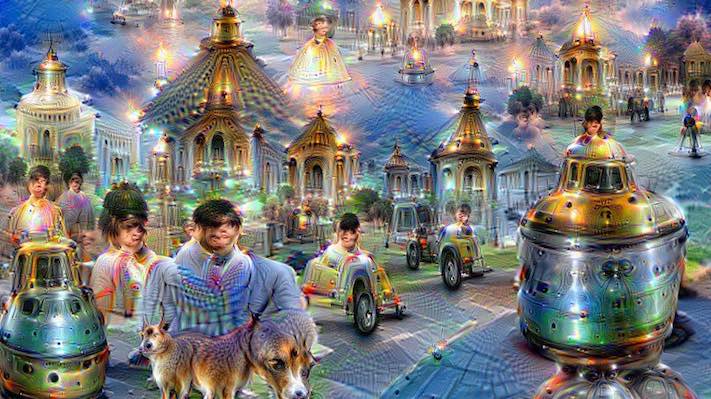 Not only is it rather sinister, but it’s not something you would expect from a computer generated piece of art. Its clearly much more interesting. If it was produced by a human, it probably wouldn’t be considered very good (by most people perhaps). However, there is something to be said for it, considering it’s not made by a human. When these images first became public in 2015, the immediate response was it’s rather obvious resemblance to the visuals when experiencing a psychedelic drug. Some people became increasingly fascinated by the prospect that this is no coincidence. Neural networks are already a loose metaphor for the human brain, so to think there is an unexplained connection is not insane. Arguing against this would be near impossible, as no one really understands the logic that neural nets come up with. Nevertheless, It is something to be a little sceptical about.

Some people judge art by only what is in front of them, and others judge art by the integrity of a given pieces creator. If you are the latter, you are likely to be dismissive of anything produced by an algorithm or neural network. It is important to recognise that this result did not come from a human, at all.

As it stands, when it comes to neural networks and visual art, the biggest use is filtering. There are all sorts of opposing opinions regarding neural networks creating good art, but they do seem to be popular when using one photo as a filter to another. This is being done particularly well at deepart.io. They use ‘the stylistic elements of one image to draw the content of another.’

Visual art is certainly not the only area machine learning is being used for. It has been particularly amusing to see the poetry they have produced.

The crow crooked on more beautiful and free,

He journeyed off into the quarter sea.

least beautiful as dignified to see.

Is the above written by a human? 54% of people asked believed it was. Honestly, I don’t blame them. This was research carried out by a Facebook AI researcher and a Cambridge researcher, however there are many more verses out there that have been written by neural nets. In fact, people seem to be using recurrent neural networks, which are having great success in specifically natural language processing. Getting a neural network to actually learn language requires a more sequential understanding of data. Unlike standard neural networks, RNNs could be considered to have a memory. A good example of this the following poem:

Morning comes of the sun

to the thin world is a star of her light.

The sheet and the body of parts

of the flame is a light, the body

sees of the wars beautiful on the street.

The sun, the stars of the sound, and desire,

and a man could love the streets.

The single shiller of light,

and the single stranger falls countal.

Father and she were the sutters of the body

The recurrent neural network that wrote this poem, unlike other ones, was taught by each letter of words instead of each word of sentences. To put this more simply, the neural network inputs were classified into single letters, instead of words. You will notice words used such as countal, sutters, and shiller are not actually words at all, although they seem like they could be. Essentially, the neural network has made spelling mistakes (well, mistakes in the eyes of a human). Whereas in the previous verse, words are directly classed from other poems, so there are no spelling mistakes, only grammatical ones. Nevertheless, I consider both to be impressive results, especially the second, bearing in mind it observed text by letter.

Finally, the music. It is obvious after everything I have discussed, that neural networks are also being used to produce music. It is interesting to see how people have gone about creating systems that do this. Most simply, you can expect many projects out there that use neural networks to take in thousands of inputs (sound tracks), and produce a new and intriguing output. It is not hard to find all sorts online examples. However, specific projects and companies are much more interesting. Spotify are starting to use AI to recognise people’s tastes in music by analysing your liked soundtracks with neural networks. This is a whole new level to music taste recognition, as it used to be static genre matching.

There are also companies, such as Jukedeck, that take advantage of the vast power of neural networks. They can anaylsis thousands of sample tracks, and produce thousands more, with no copyright issues (bearing in mind there is no real author). Tracks can be produced in mass, and sold much cheaper than the price of hiring a producer. Of course, the music is not very complex, but at this point it doesn’t really need to be.

Other programs are using neural networks to automatically detect and categorize a track’s genre. This kind of problem perfectly suits AI, and as you can imagine, clean up the huge mess that genres seem to be these days. In fact, there are so many ways neural nets are being used, from lyric extraction, automated noise cancelling, voice and sound enhancement, and do I even need to mention Shazam?

I don’t really have a strong opinion when it comes to AI and the art industry. In some less creative uses, it can be really helpful. In art production – of any type – it can be extremely weird and fascinatingly  controversial. Do you need to be human to create notable art?