Beginner|Intro|Natural Language Processing|NLTK|text analytics1
Hello all and welcome to the second of the series – NLP with NLTK. The first of the series can be found here, incase...

Hello all and welcome to the second of the series – NLP with NLTK. The first of the series can be found here, incase you have missed.

In this article we will talk about basic NLP concepts and use NLTK to implement the concepts.

A corpus is a collection of machine readable text that is sampled to represent a natural language or language variety. Corpus denotes the technical term for large bodies of digital text. The plural form of corpus is known as corpora. Corpora plays an essential role in NLP research as well as other investigations related to linguistics.

While converting written text to machine readable form, there lies another form of preparatory work which is beyond the basic text processing of transcribing audio/video speech known as corpus markup. Corpus markup is a system of standard codes inserted into a document stored in electronic form to provide information about the text itself (i.e., text metadata) and govern formatting, printing or other processing (i.e., structural organization). Metadata markup can be embedded in the same document or stored in a separate but linked document. Structural markup has to be embedded in the text.

Metadata and structural markup are important for corpus because –

In order to extract linguistic information from a corpus – they must first be encoded in the corpus, by a process that is technically known as “corpus annotation.”

Text corpora contains rich metadata which is useful in deriving valuable insights. These corpora can be annotated in various forms and at different levels like –

NLTK has some famous inbuilt corpus. These can be found on the nltk data folder that we have just downloaded in the previous article. In order to access NLTK provided corpora, we need to call the nltk.corpus module.

Text segmentation is the process of converting a well-defined text corpus into its component words and sentences. Word segmentation breaks up the sequence of characters in a text by locating the word boundaries – the points where one word ends and another begins. For computational linguistics purposes, the words identified as a result of segmentation are referred to as tokens, and word segmentation is also known as tokenization. Hence, tokenization divides strings into lists of substrings.

This is another type of word tokenizer present in NLTK. This works by splitting punctuation separately from the words.

Paragraphs can be tokenized on the basis of sentence. For this sent_tokenize() uses an instance of NLTK – PunktSentenceTokenizer. This has been trained to perform tokenization on different European languages based on punctuations that starts and ends a sentence.

PunktSentenceTokenizer is a sentence boundary detection algorithm. This is implemented from Kiss and Strunk, “ Unsupervised Multilingual Sentence Boundary Detection“. This is an abstract class of the default NLTK sentence tokenizer. For large body of text it is useful to use this algorithm.

Frequency distribution is a measure of each vocabulary in a given set of text. This tells us the frequency or the number of times a particular word has appeared in the text.

Text normalization is a step that involves merging different written forms of a token into a canonical normalized form; for example, a document may contain the equivalent tokens “Mr.”, “Mr”, “mister”, and “Mister” that would all be normalized to a single form.

In other words, normalization is a process that converts a list of words to a more uniform sequence. This is helpful for preparing text for later process. Converting words into standard format ensures that other operations are able to work with the corpus and will not have to deal with the issues that might compromise the process.

These are the collection of english stopwords by NLTK – I , me, my etc.

You can observe from the output that the stopwords from the sentence has been removed.

You can see that the punctuation has been separately normalized based on the regular expression specified in the above code.

According to this law – for any given word we can establish the following relation:

f is the frequency of that word,

r is the rank or the position of the word in the sorted list, and

k is a constant.

If we take up a large corpus and count up the number of times each word occurs in that corpus and then list those words starting from higher frequency order, we would observe that there is a relationship between the frequency of a word and its position in the list.

This mathematical relationship may not hold exactly true, but still it is useful to describe how words are distributed in human language. 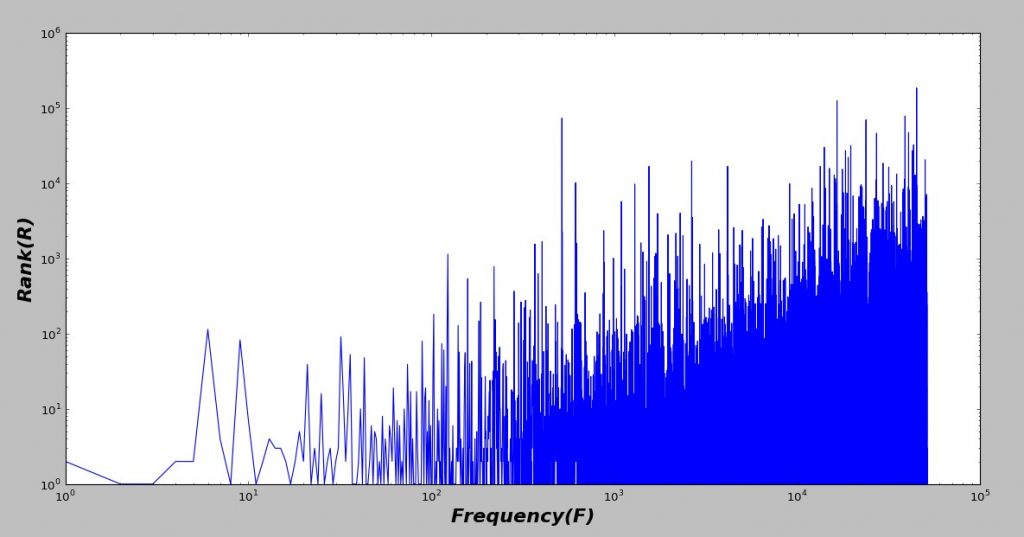 Stemming is a process of obtaining the root word (stem) from a given word by eliminating its affixes. Stemming is a part of normalization process, and is used extensively for information retrieval process. The use of stems for searching has the advantage of increasing recall by retrieving terms that have the same roots but different endings. While searching with stems, it is possible to retrieve many irrelevant terms which have the same roots but are not related to the topic of search. For accurate information retrieval, the search term should be as long as necessary to achieve precision but short enough to increase recall.

The Porter Stemming algorithm is used as a normalization process while setting up Information Retrieval systems. This works by eliminating the common morphological and inflexional endings from English words. You can read more about the Porter Stemmer here.

Snowball stemmer is available in 15 languages besides english and hence is more versatile. While performing stemming with this algorithm, first, we need to create an instance of the language that we want to use and then perform the stemming operations. Snowball stemmer is mostly used because it gives more accurate results than Porter Stemmer and it was developed with the objective of addressing the flaws of Porter Stemmer. You can read more about the snowball stemmer here.

Below is a code sample showing the difference in results by Snowball Stemmer and Porter Stemmer.

Edit distance is a way of quantifying how dissimilar two texts (strings) are to one another by counting the minimum number of edit operations (insert, delete, substitution) required to transform one string to the other.

This is used to measure the distance between two sequence of strings based on their difference and belongs to the family of edit distance-based metrics. This can be defined as the minimum number of edits – insertion, deletion and substitution required to convert one word to another. NLTK uses this method as the default edit distance method.

In order to measure the similarity between two strings, we will refer to as the source string (s) and the target string (t). The distance is the number of deletions, insertions, or substitutions required to transform s into t. For example:

The greater the Levenshtein distance, the more different the strings are.

Lets have a understanding of how the algorithm works:

Also known as Intersection over Union is a statistical method used for comparing the similarity and diversity of texts. This works by comparing members of two sets to differentiate between distinct and shared members. It is a measure of the similarity for the two sets of data within a range of 0℅ to 100℅ with the highest percentage yielding more similarity.

The formula to find the index is:

Its formula notation is:

How does algorithm work:

To summarize, we will go through a micro project. In this project we will see the similarity of two sentences, both intending the same meaning but are expressed in different voices. Let’s get to the code.

Data Science professional and an Independent Researcher in the field of ML/DL/NLP/AI.