The term “data science for good” has been appearing on LinkedIn feeds, Twitter timelines, and RSS feeds for me a little more than usual recently. This is not a complaint by any means; rather, it’s refreshing to see that many data scientists and others involved in data are becoming increasingly aware of the good that data can do, rather than how data can be used to sell.

For this reason, we at ODSC began offering a monthly Grant Award designed to help data scientists and AI startups gain valuable funding and resources they need to help their projects grow and further benefit the data science community. Earlier this year, Michael Hayes and his non-profit startup CancerAI proved to exemplify “data science for good,” as his mission is to use machine learning to fight cancer. I sat down with Michael recently to hear his story, CancerAI’s mission, and what the next steps are.

What is your background? 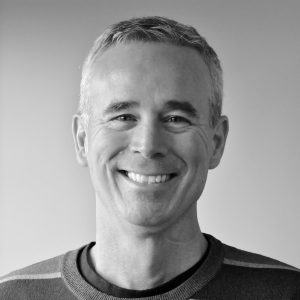 I started with an undergrad in computer science, and then I was a nuclear engineer on a US Navy submarine. About 20 years ago, I went back to software, and since then I’ve been a serial entrepreneur.

I previously started my own software company in financial services, and most recently I was the CEO of a machine learning startup focused on deep learning computer vision and image analysis. I left there a couple of months ago and decided to start CancerAI.  I also do some work in strategic alliances at MIT’s Computer Science and Artificial Intelligence Lab (CSAIL).

Talk to me about CancerAI and its mission

CancerAI is the first non-profit AI research organization focused 100% on fighting cancer. Our mission is to save lives by developing and applying machine learning technologies that improve cancer prevention, detection, and treatment. Five years ago, machine learning really wasn’t at a point where it could make much difference in the fight against cancer, but as with many industries, AI has progressed to the point where we’re starting to be able to really make a difference.

One example of advances in AI is in natural language understanding, which is obviously a very important area in machine learning. It’s enabling computers to read through huge amounts of medical record data – more than any human could ever read – and find patterns that predict cancer risk. Advances in technology are allowing us to train computers to validate medical imagery like PET scans, MRIs, and mammograms. With a few more years of hard work, I believe we can make real improvements in detecting cancer earlier, and earlier detection is probably the fastest way to start saving peoples’ lives.

By modeling interactions of different molecules, we’re able to start to accelerate drug discovery by basically predicting the outcome of what used to be an experiment that you’d have to actually run in a lab. Now you can run some of these experiments “in silco” as opposed to “in vitro.”

Another area that’s showing promise is systems biology, where researchers are beginning to use AI to model the complex interactions of all the different biological processes at the cellular level.

Why did you choose to explore the use of AI in fighting cancer?

In 2008, I was diagnosed with stage IV throat cancer and I was successfully treated at Mass General Hospital here in Boston. After I finished treatment in 2009, I looked around, and as a software guy, there wasn’t really much I could do to fight cancer. So I got involved with a little cancer philanthropy, like a lot of people do. For instance, I recently ran the Boston Marathon to raise money for the MGH Cancer Center.

But then as I got more involved in my last company, in machine learning, I started to see the potential for AI to really make a difference in the fight against cancer. For me, it was a natural path of things to do next. If you’re going to start up a new machine learning enterprise, what could be more rewarding than to do something where you could work with cutting edge technology and actually save some lives? 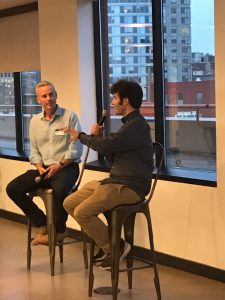 Why did you choose to become a non-profit instead of a for-profit organization?

When I first thought of starting CancerAI, I actually assumed I would do the same thing that I’ve done before and raise some seed money from angel investors. But what I’ve learned through hard-won experience is that two of the biggest challenges that any AI startup faces is hiring machine learning research scientists, and obtaining data. And a nonprofit has advantages in both of these areas.

On the hiring side, there’s a sizeable percentage of the top machine learning people coming out of the best academic programs every year who are attracted to mission-driven or purpose-driven organizations. Sure, they want to work on interesting AI problems, they want to work with very smart people, and they want to make reasonable compensation.  But they also want to make the world a better place. Being a nonprofit also allows us to be more open about publishing our research and open-sourcing our software, which are another couple of things that research scientists like. I have to give credit to OpenAI for paving the way there, as they’re the first AI research nonprofit. They don’t work on cancer, but they’re the ones that proved you can hire some of the best AI people in the world if you set up a mission-driven organization that’s organized the right way.

The second advantage of a nonprofit relates to data. People generally want to help cure cancer, and studies show that individuals will share their data with organizations like CancerAI as long as they don’t feel like they are going to be exploited. And all else being equal, it’s simpler for an organization to share data with a nonprofit since they don’t have to figure out what the revenue sharing arrangement should be, or worry about charging the right amount for their data.  It’s similar to why organizations like hospitals are willing to share data with universities before they will share it with other companies.

Once your team is properly built up, what institutions do you hope will use the programs you’re creating?

Our current plan is to focus first on improving early detection across all kinds of cancers. It may be that we focus on better computer vision analysis of medical imagery. We might end up doing something else, but the theme is early detection as opposed to prevention or treatment. We eventually plan to do all of it, but since we’re just getting started, it’s important to focus on one area first.

I mentioned before that our mission is to “develop and deploy” new AI to fight cancer.  What’s exciting short term is the “deploy,” and by that we mean to work with leading academic research institutions and look for open source research results that can be used out in the medical industry to help patients. We’ve already identified some promising research from MIT, but here’s a bunch of research out there that needs a bridge into the real world – and our software engineers are going to build that bridge.

What are some of your immediate next steps?

Continuing to build relationships with various machine learning and cancer research organizations. On the ML side, we’ve been talking to places like MIT, Harvard, Stanford, Berkeley, University of Washington, University of Montreal, and the University of Toronto. On the cancer side of things, because we’re based in Boston, we’ve had discussions with places like the Broad Institute, Mass General Hospital Cancer Center, the Whitehead Institute, and the Koch Center for Integrative Cancer research.  Boston just happens to be one of the best places in the world if you want to work at the intersection of AI and cancer research. 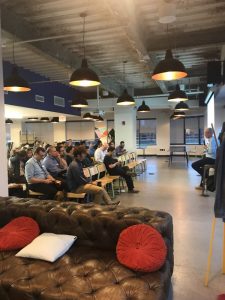 Do you have any plans to bridge the communication gap between the ML groups and cancer research organizations?

We’re looking to connect the dots between these organizations. These two groups have started to talk to each other, but there’s still huge room for improvement. There needs to be more knowledge transfer. CancerAI will facilitate connections between these two worlds. There’s a huge opportunity for improving communication. One small example:  just this week, we sponsored a meetup of a group called Fighting Cancer with AI, where the audience included professionals from both the machine learning and medical fields.

How have other organizations used AI to fight cancer?

We’re excited to see where Michael takes CancerAI next and I hope you will follow his journey of using AI to fight cancer! If you have a project or startup related to data science or AI, consider applying for our next grant today.