graph analytics1 Open Source8 rapids12
The Data Scientist has a collection of techniques within their proverbial toolbox. Data engineering, statistical analysis, and machine learning are among the most commonly...

The Data Scientist has a collection of techniques within their proverbial toolbox. Data engineering, statistical analysis, and machine learning are among the most commonly known. However, there are numerous cases where the focus of the analysis is on the relationship between data elements. In those cases, the data is best represented as a graph. Graph analysis, also called network analysis, is a collection of algorithms for answering questions posed against graph data. Graph analysis is not new.

The first graph problem was posed by Euler in 1736, the Seven Bridges of Konigsberg, and laid the foundation for the mathematical field of graph theory. The application of graph analysis covers a wide variety of fields, including marketing, biology, physics, computer science, sociology, and cyber to name a few. RAPIDS version 0.6 includes the first official release of cuGraph.

RAPIDS cuGraph is a library of graph algorithms that seamlessly integrates into the RAPIDS data science ecosystem and allows the data scientist to easily call graph algorithms using data stored in a GPU DataFrame. For the initial release, graph data needs to be in Coordinate Format (COO), also known as an edge list, and is represented by two columns, Source and Destination. Consider the following example of NetFlow data and looking at just the first five columns. The “id.orig_h” and “id.resp_h” columns identify an event between two IP addresses. Those two columns represent an edge list that can be used for graph processing.

Once the two edge columns are identified the data scientist can then leverage any of the cuGraph analytics. To run the PageRank algorithm the user would perform something like:

One of the design goals of cuGraph is to have an API familiar to the data scientist used to performing graph analytics. Therefore, the data scientist with experience with NetworkX will recognize the process of creating a graph object and then running an analytic against that graph object. A more in-depth example is given at the bottom of this blog.

RAPIDS version 0.6 represents the first official release of cuGraph and the first step towards a complete graph analysis package. This initial release focuses on providing a foundation and includes several algorithms optimized for single-GPU analytics.

The above listed algorithms are designed for execution on a single-GPU with data sets around 500 million edges or less. When compared against a single-node NetworkX analytic in Python, the data scientist can expect performance improvement of 50–500x on average. 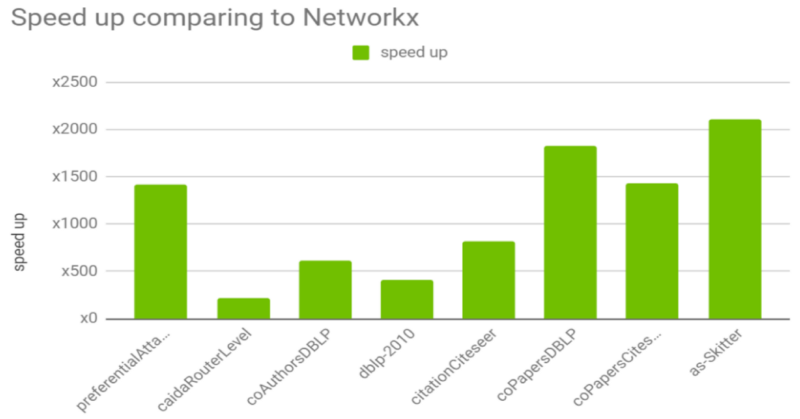 As a means of measuring performance, the PageRank websearch benchmark from the HiBench Suite was used. The HiBench website describe the suite as “… a big data benchmark suite that helps evaluate different big data frameworks in terms of speed, throughput and system resource utilizations”. One feature of HiBench is that it measures the end-to-end performance that a user will experience. That includes, data loading, data prep, and running of an analytic. The PageRank benchmark consist of processing a graph based on webpages (vertices) and the connections between the webpages (edges).

The biggest challenge faced when executing the benchmark was with the data readers. The CSV reader within cuDF is significantly faster than the one found in Pandas, however we encountered scalability issues with large datasets. To ensure that large data sets were processed, the CSV reader from cuDF was used along with the CSV reader found in Pandas. Additionally, the benchamrk was run on a 10-node Spark cluster and on a high power workstation running NetworkX . Since NetworkX is the most popular graph framework used by data scientists, those results will be used as the baseline for performance evaluation.

The cuGraph GitHub repository has detailed instructions on how to access the cuGraph library. See https://github.com/rapidsai/cugraph

Additionally, a collection of sample cuGraph notebooks can be found within the RAPIDS notebook repository under cugraph: https://github.com/rapidsai/notebooks/tree/branch-0.6/cugraph.

The following example runs through how to execute Weighted Jaccard on a graph where the weights are the PageRank scores.

RAPIDS is a set of open source libraries for GPU accelerating data preparation, machine learning, and now graph analytics. The roadmap is for additional analytic and constant improvement in performance, with the goal being that every cuGraph algorithms supports multi-GPU. The cuGraph team is eager to hear feedback and impressions of this initial release. A series of blogs on graph analytic is planned, so look for more blogs on cuGraph to come.