Python23 scikit optimize1
So you want to optimize hyperparameters of your machine learning model and you are thinking whether Scikit Optimize is the right tool for...

So you want to optimize hyperparameters of your machine learning model and you are thinking whether Scikit Optimize is the right tool for you?

You are in the right place.

In this article I will:

Let’s dive in, shall we?

Ease of use and API

The API is just awesome. It is so simple, that you can almost guess it without reading the docs. Seriously, let me show you.

You define the search space:

You define the objective function that you want to minimize (decorate it, to keep the parameter names):

And run the optimization:

That’s it. All the information you need, like the best parameters or scores for each iteration, are kept in the results object. Go here for an example of a full script with some additional bells and whistles.

When it comes to hyperparameter search space you can choose from three options:

There is no support for nested search spaces that account for the situations where some combinations of hyperparameters are simply invalid. It really comes in handy sometimes.

There are four optimization algorithms to try.

You can run a simple random search over the parameters. Nothing fancy here but it is useful to have this option within the same API to compare if needed.

Both of those methods as well as the one in the next section are examples of Bayesian Hyperparameter Optimization also known as Sequential Model-Based Optimization SMBO. The idea behind this approach is to estimate the user-defined objective function with the random forest, extra trees, or gradient boosted trees regressor.

After each run of hyperparameters on the objective function, the algorithm makes an educated guess which set of hyperparameters is most likely to improve the score and should be tried in the next run. It is done by getting regressor predictions on many points (hyperparameter sets) and choosing the point that is the best guess based on the so-called acquisition function.

There are quite a few acquisition function options to choose from:

Instead of using the tree regressors, the objective function is approximated by the Gaussian process.

One more thing to consider is the optimization method used at each iteration, sampling or lbfgs. For both of them, the acquisition function is calculated over a randomly selected number of points (n_points) in the search space. If you go with sampling, then the point with the lowest value is selected. If you choose lbfgs, the algorithm will take some number (n_restarts_optimizer) of the best, randomly tried points, and will run the lbfgs optimization starting at each of them. So basically the lbfgs method is just an improvement over the sampling method if you don’t care about the execution time.

I really like when there is an easy option to pass callbacks. For example, I can monitor my training by simply adding 3 lines of code:

Other things that you could use this option for, are early stopping or saving results every iteration.

There are skopt.dump and skopt.load functions that deal with saving and loading the results object:

You can restart training from the saved results via x0 and y0 arguments. For example:

Simple and works with no problems.

Overall, there are a lot of options for tuning (hyper)hyperparameters and you can control the training with callbacks. On the flip side, you can only search through a flat space and you need to deal with those forbidden combinations of parameters on your own.

It’s extensive with a lot of examples, docstrings for all the functions and methods. It took me just a few minutes to get into the groove of things and get things off the ground.

Go to the documentation webpage to see for yourself. 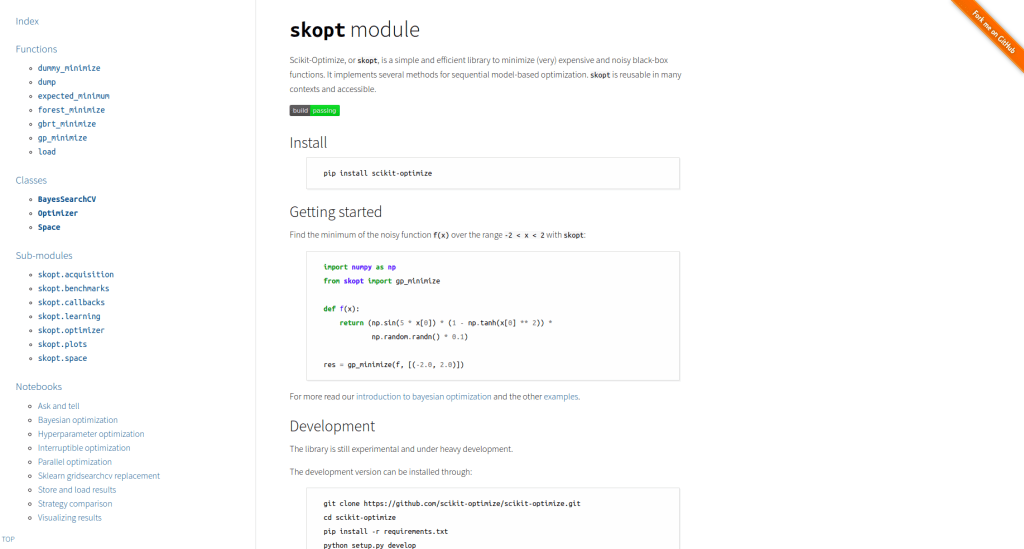 It could be a bit better, with more explanations in the docstrings, but the overall experience is just great.

This is one of my favorite features of this library. There are three plotting utilities in the skopt.plots module, that I really love:

What is cool about it, is that you can compare the progress of many strategies by simply passing a list of results objects or a list of (name, results) tuples.

For example, when we look at the random search strategy we can see there is no evolution. It is just randomly searched: 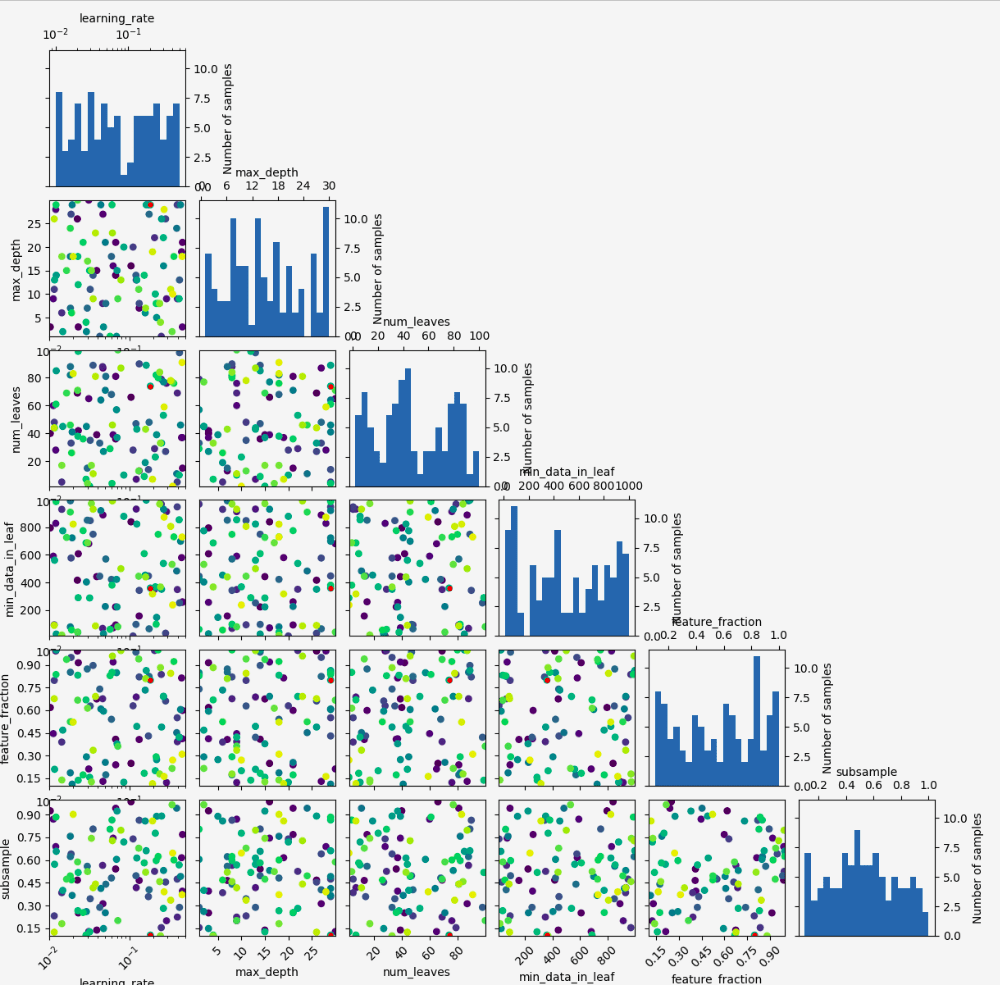 But for the forest_minimze strategy, we can clearly see that it converges to certain parts of space which it explores more heavily. 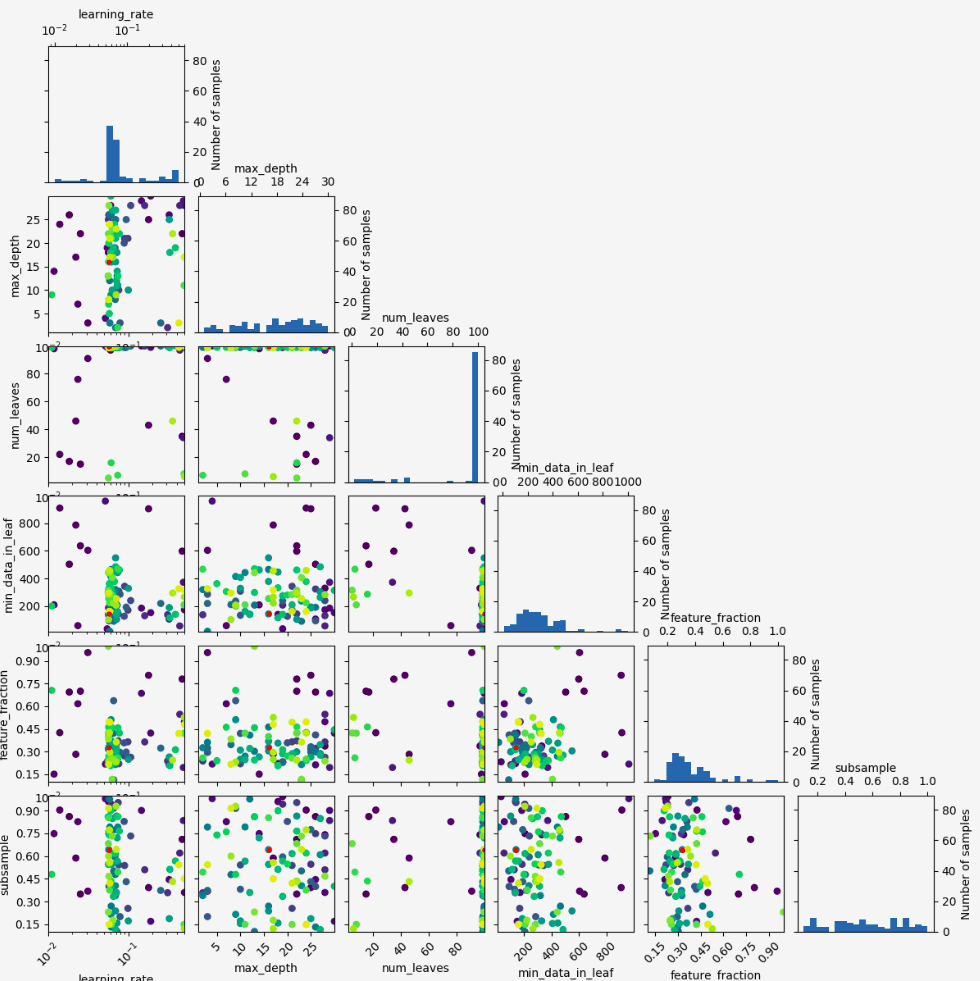 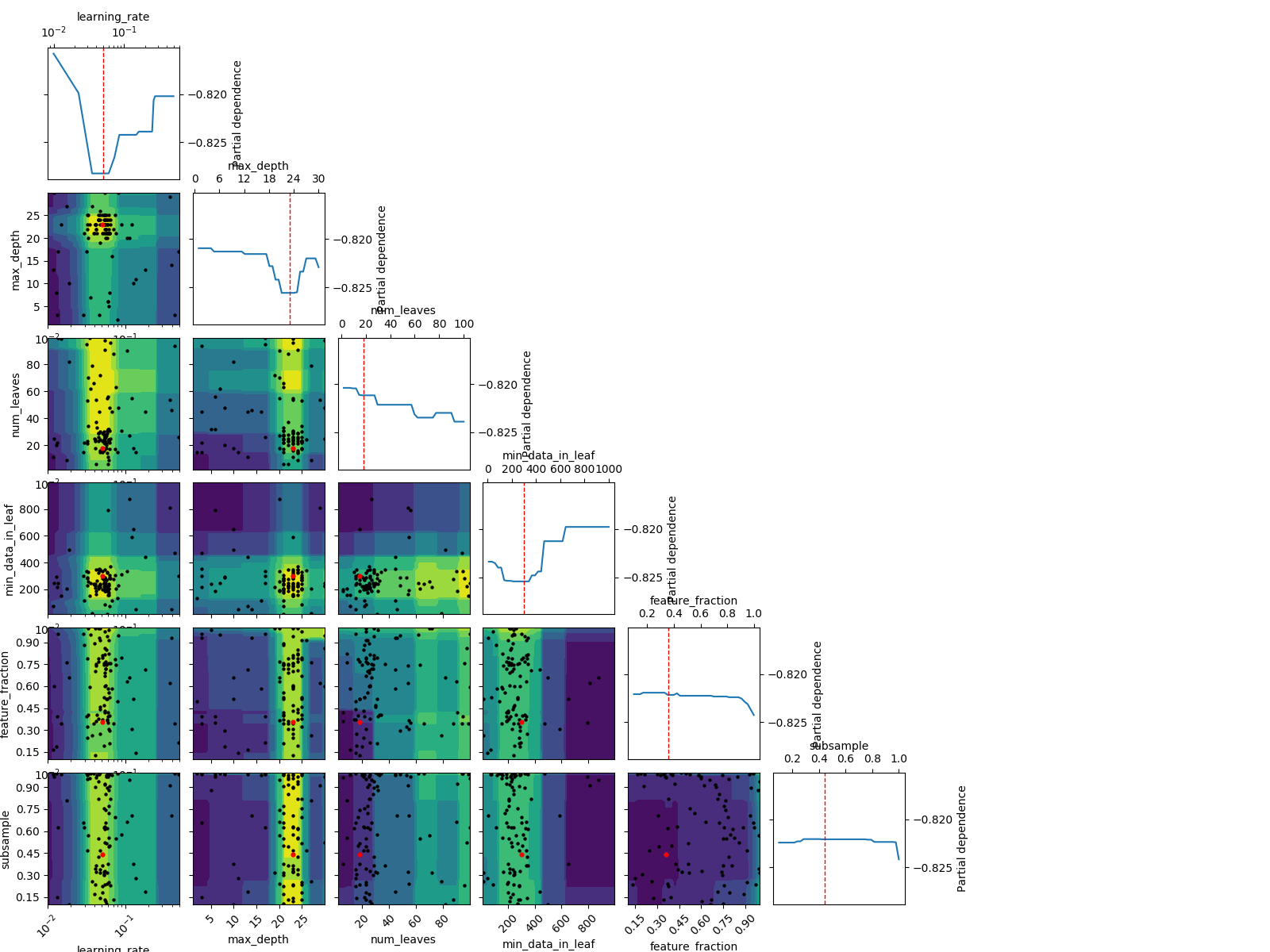 Overall, the visualizations are incredibly good.

I liked it so much, that I’ve created a set of functions that help with conversion between different HPO libraries so that you could use those visualizations for every lib. I’ve put them in the neptune-contrib package and you can check it out.

Every optimization function comes with the n_jobs parameter, which is passed to the base_estimator. That means, even though the optimization runs go sequentially you can speed up each run by utilizing more resources.

I haven’t run a proper timing benchmark for all the optimization methods and n_jobs. However, since I kept track of the total execution time for all experiments I decided to present average times for everything I ran 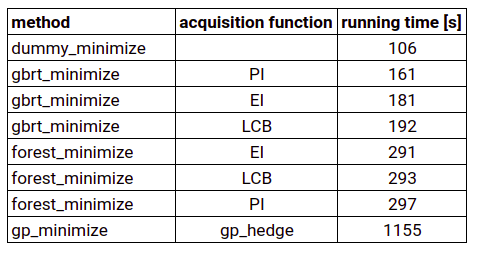 Obviously, the random search method was the fastest, as it doesn’t need any calculations between the runs. It was followed by the gradient boosted trees regressor and random forest methods. Optimization via the Gaussian process was the slowest by a large margin but I only tested the gp_hedge acquisition function, so that might have been the reason.

Because there is no option to distribute it on the run level, over a cluster of workers, I have to take a few points away.

As an example let’s tweak the hyperparameters of the lightGBM model on a tabular, binary classification problem. If you want to use the same dataset as I did you should:

To make the training quick I fixed the number of boosting rounds to 300 with a 30 round early stopping.

All the training and evaluation logic is put inside the train_evaluate function. We can treat it as a black box that takes the data and hyperparameter set and produces the AUC evaluation score.

You can turn every script that takes parameters as inputs and outputs the score into such train_evaluate. Once that is done you can treat it as a black box and tune your parameters.

To train a model on a set of parameters you can run something like this:

For this study, I will try to find the best parameters within 100 runs budget.

If you search randomly over hyperparameters you can get 0.864 as I showed in this experiment.

In total I ran 87 experiments but let’s take a look at the top few:

If you want to explore all of those experiments in more detail you can simply go to the experiment dashboard.

You do know that as an individual you can track experiment runs with Neptune for free, right?

The forest_minimize method was the clear winner but to get good results, it was crucial to tweak the (hyper)hyperparameters a bit. For the LCB acquisition function, a lower value of kappa (exploitation) was better. Let’s take a look at the evaluations plot for this experiment: 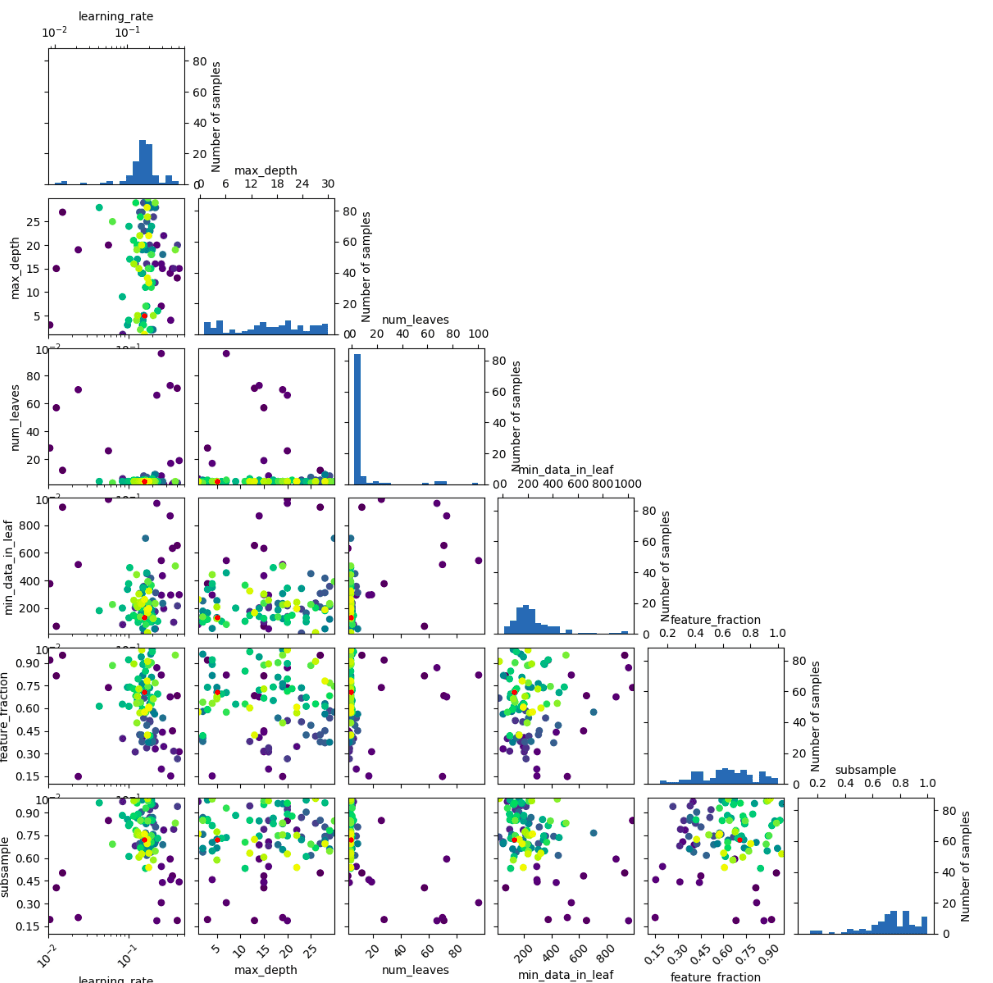 It exploited the low num_leaves subspace but it was very exploratory for the max_depth and feature_fraction. It’s important to mention that those plots differed a lot from experiment to experiment. It makes you wonder how easy it is to get stuck in a local minimum.

However, the best result was achieved with the EI acquisition function. Again, tweaking the xi parameter was needed. Looking at the objective plot of this experiment: 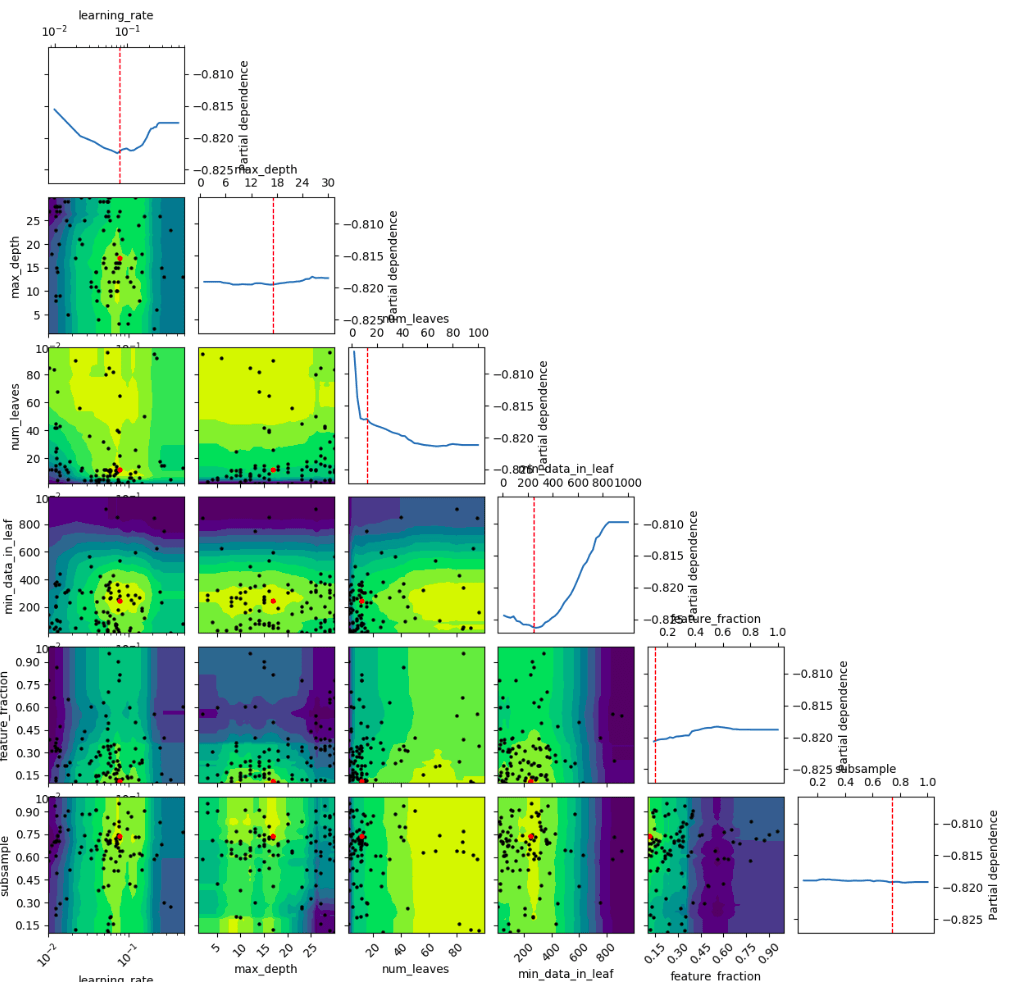 I get the feeling that by dropping some insensitive dimensions (subsample, max_depth) and running a more fine-grained search on the other hyperparameters I could have gotten a bit better result.

It was a surprise to me that the results for the gp_minimze were significantly worse when I used the lbfgs optimization of the acquisition function. They couldn’t beat random search. Changing the optimization to sampling got better AUC but was still worse than forest_minimize and gbrt_minimize. Go to gaussian process experiments to see for yourself.

You should also know that as of 5/Dec/2019 this project is not actively maintained.

I certainly hope that it will change in the future. For now, I am monitoring the Github repo.

Maybe you would like to help with this great project?

If so, I suggest you reach out to the authors, Tim Head, Manoj Kumar or Iaroslav Shcherbatyi.

Let’s take a look at the results for all criteria: 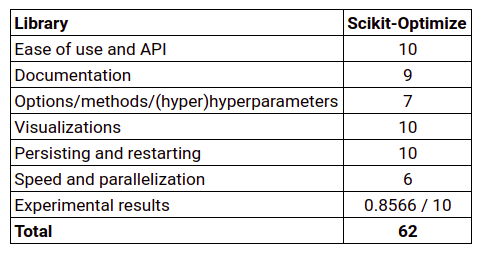 Overall, I really like Scikit-Optimize. It is a pleasure to use, gives you great results, and useful visualizations. Also, it has a lot of options to tweak with strong documentation to guide you through it.

On the flip side, it is difficult, if not impossible, to parallelize it run-wise and distribute over a cluster of machines. I think going forward, this is going to be more important and can make this library not suitable for some applications.

My recommendation is to use it if you don’t care that much about the speed and parallelization but look elsewhere if those are crucial to your project.