Support for gun control is lower among young adults

Data analysis|statistics2
In current discussions of gun policies, many advocates of gun control talk as if time is on their side; that is,...

In current discussions of gun policies, many advocates of gun control talk as if time is on their side; that is, they assume that young people are more likely than old people to support gun control.

This letter to the editor of the Economist summarizes the argument:

It is unlikely that a generation raised on lockdown drills, with access to phone footage of gun rampages and a waning interest in hunting, will grow up parroting the National Rifle Association’s rhetoric as enthusiastically as today’s political leaders. Change is coming.

And in a recent television interview, a survivor of the Parkland school shooting told opponents of gun control:

You might as well stop now, because we are going to outlive you.

But these assumptions turn out to be false.  In fact, young adults are substantially less likely to support gun control than previous generations.

The following figure shows results I generated from the General Social Survey (GSS) and the CIRP Freshman Survey, plotting support for gun control by year of birth. 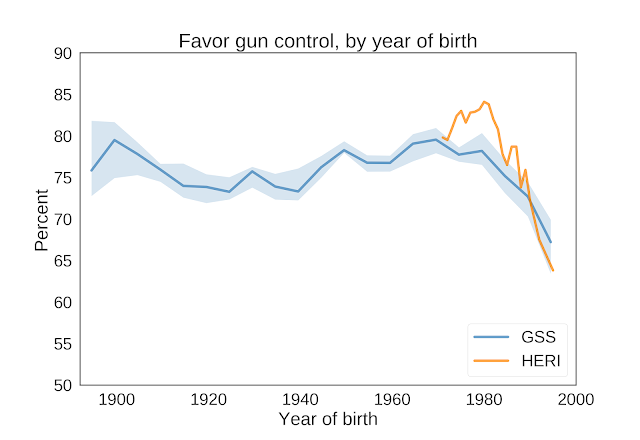 The blue line shows the fraction of respondents in the GSS who answered “Favor” to the following question:

This dataset does not go back as far, but shows the same pattern: a large majority of people born before 1980 supported gun control (when they were surveyed as college freshmen); among people born after 1980, far fewer support gun control.
The code I used to generate this figure is in this Jupyter notebook.

I am not the only one to notice these patterns.  This Vox article from last week reports on similar results from a 2015 Pew Survey and a 2015 Gallup Poll. 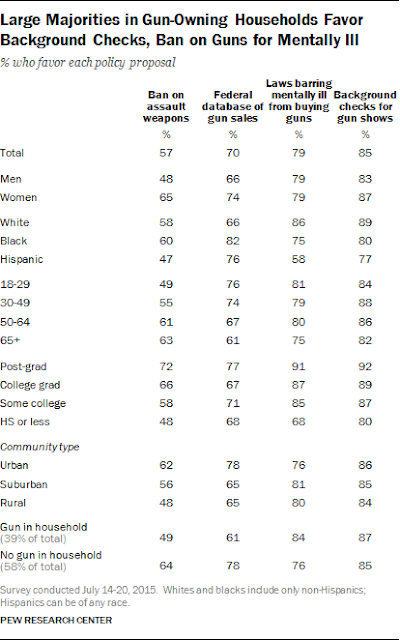 What do you think is more important – to protect the right of Americans to own guns, OR to control gun ownership?

Here are the results: 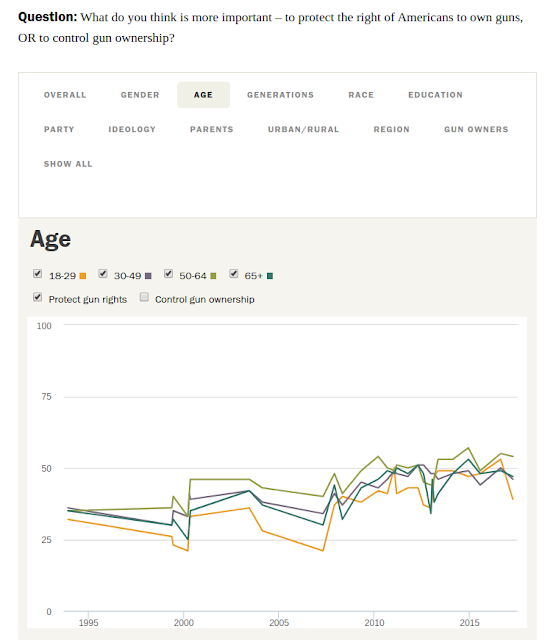 Before 2007, young adults were the least likely group to choose gun rights over gun control (see the orange line).  Since then, successive cohorts of young adults have shifted substantially away from gun control.

This Gallup poll shows that current young adults are more likely than previous generations to believe that more concealed weapons would make the U.S. safer: 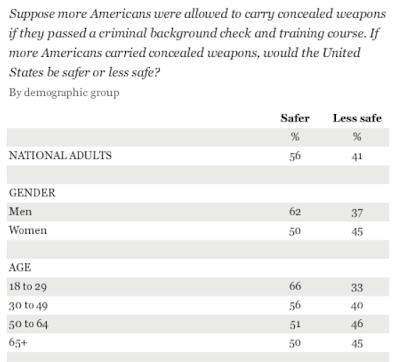 Each of these sources is based on different questions asked of different groups, but they show remarkably consistent results.

The GSS is based on a representative sample of the adult U.S. population.  It includes people of different ages, so it provides insight into the effect of birth year and age.  The Freshman Survey includes only first-year college students, so it is not representative of the general population.  But because all respondents are observed at the same age, it gives the clearest picture of generational changes.

A possible explanation for these changes is that since the NRA created its lobbying branch in 1975 and its political action committee in 1976, it has succeeded in making gun rights (and opposition to gun control) part of the conservative identity.

The following figure shows the same data from the GSS, grouped by political self-identification: 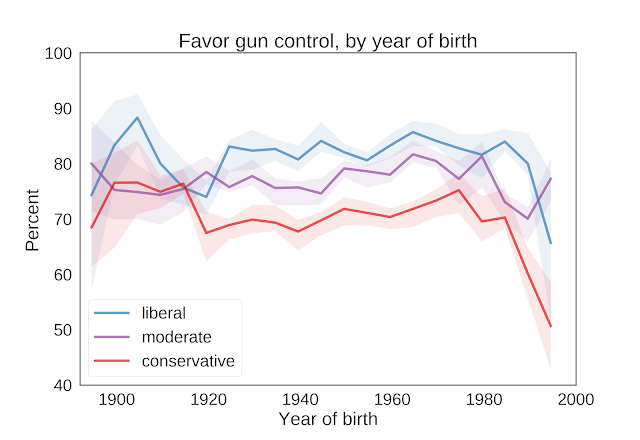 As expected, support for gun control has dropped most among people who identify as conservative.

Among moderates, it might have dropped, but not by as much.  The last data point, for people born around 1995, might be back up, but it is based on a small sample, and may not be reliable.

Support among liberals has been mostly unchanged, except for the last point in the series which, again, may not be reliable, as indicated by the wide error bars.

These results suggest that the decrease in support for gun control has been driven primarily by changing views among young conservatives.

UPDATE: NPR has a related story from a few days ago.  They report that “Millennials are no more liberal on gun control than their parents or grandparents — despite diverging from their elders on the legalization of marijuana, same-sex marriage and other social issues.”