swift1
There are many popular languages, but not all of them remain popular year after year. Nevertheless, some languages don’t lose their popularity and become...

There are many popular languages, but not all of them remain popular year after year. Nevertheless, some languages don’t lose their popularity and become even more widespread. We discuss the debate around Swift versus Python.

For example, PYPL statistics for 2018 shows that Python is the most popular language. Whereas Swift is also gaining momentum, and all apps for iOS are created using Swift today since it is more convenient and robust than Objective-C that was used for iOS apps building before.

We want to cover all the strong and weak sides of Python and Swift and compare what they have in common.

Advantages and drawback of Python

Python was created in 1991, and today it is used mostly in FinTech apps, in machine learning and data science-based software. Also, it is used for back-end development.

It is worth noting that Stack Overflow pointed out that Python is the fastest-growing language based on the data obtained from Stack Overflow Trends. 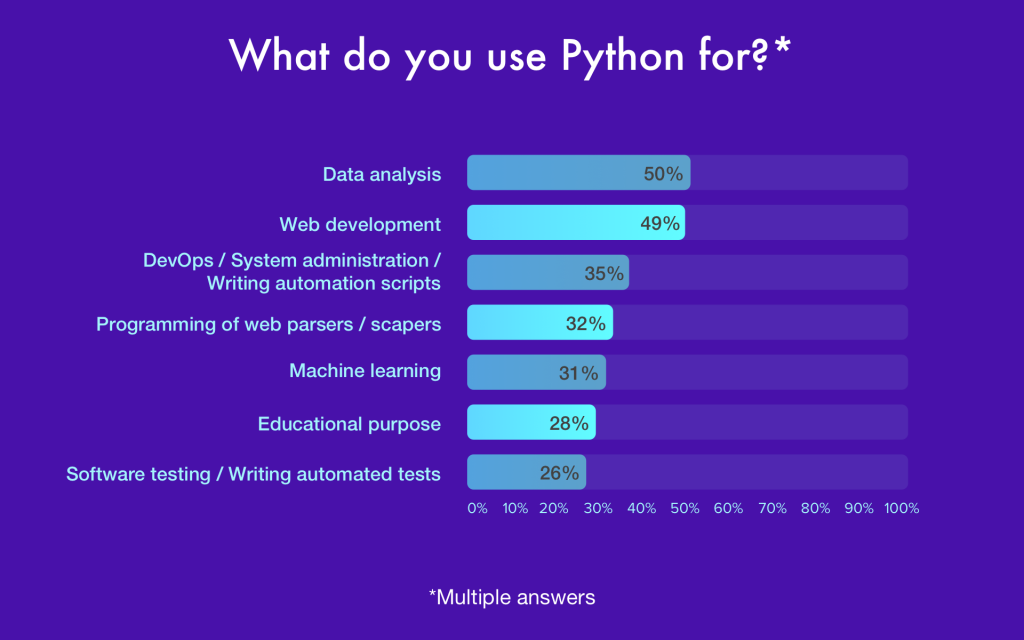 Dropbox, Reddit, Netflix, Facebook, and other famous companies use Python in the development and enhancement of their projects.

The main benefits of Python

Now we will speak about Python advantages in detail.

Simplicity. Python is considered to be an easy-to-learn language, and it has high readability. Everybody who starts learning how to code needs to start with Python. Python has a style guide PEP8 that prompts developers on how to format code. It helps other developers understand a code.

Multi-paradigm language. It makes it possible to combine procedural approach to code writing along with object-oriented and functional one.

Open-source. Developers may change the source code of Python, and it helps make the language more robust since developers improve it continuously.

Compatibility with other languages. Python is compatible with C, C++, and Java languages, so it can be integrated into apps built using these languages.

A large number of libraries. Some many libraries and frameworks help build apps and simplify this process. For example, NumPy, Plotly, and Pandas are the most well-known libraries for Python. Django and PyTorch are popular frameworks. 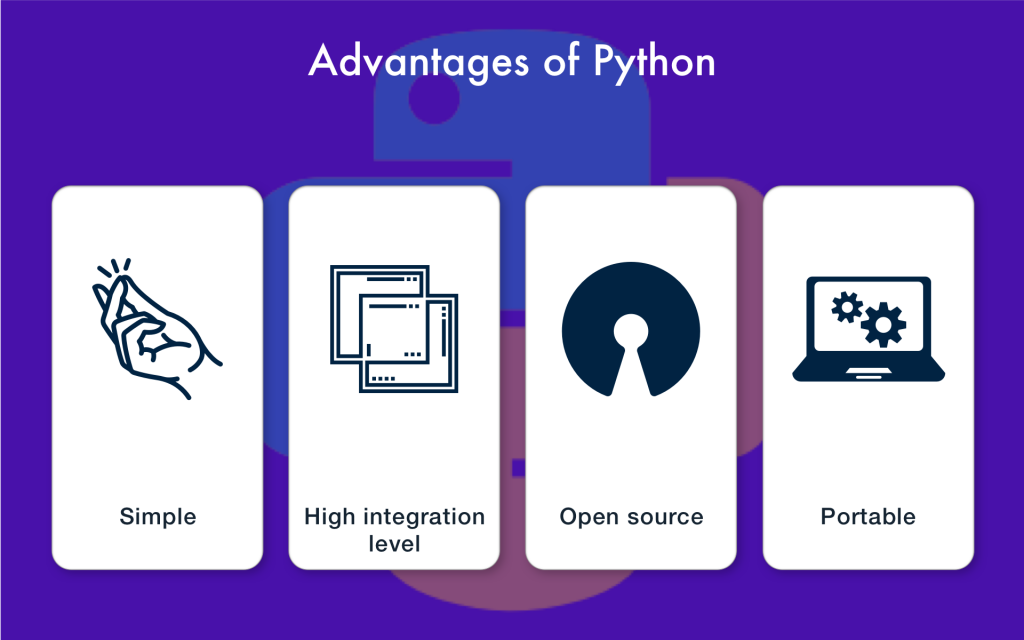 Well, there are some dark spots in Python that we cannot ignore.

Python is not suitable for mobile development. When you need to create a mobile app, you should choose another language for it, rather than using Python. It is better to orient on native languages depending on what platform you need to build an app for – iOS or Android.

Limitations in design. Python detects a type of variable automatically, and mistakes are occurred from time to time. That is why, due to design restrictions, you should be prepared for occasional errors.

Memory consumption. Python consumes a large part of memory, so you should choose another language for intensive memory tasks.

Advantages and drawbacks of Swift

Swift is not an old language. It was created in 2014. Chris Lattner, who created Swift, noted that Ruby, C#, and Python were the main languages that inspired Chris to create Swift. That is one of the reasons why we compare Swift and Python.

LinkedIn, Pandora, Airbnb, Lyft—this is not a full list of apps that are created for iOs and macOS using Swift.

Every year Swift gets upgrades. This year, Swift 5.0 is already available.

The main benefits of Swift

Swift also has many pros, and we will consider the main of them.

Simplicity. Like Python, Swift is also simple. It is easy for iOS developers to create software with the help of Swift. Other developers may work with code written by their colleagues without any obstacles.

Safety. As Swift is a statically typed language, it allows developers to find bugs quickly and fix them. Also, the nil pointer helps developers avoid errors in compiling.

Memory management. Automatic Reference Counting manages the memory apps automatically. And developers don’t need to do it, and therefore the development time is reduced.

Potential. Today Swift becomes cross-platform. It is available on Linux, and Apple is planning to make it available on Windows as well. IBM has created Swift Sandbox that allows server-side Swift to be compatible with many back-end tools. 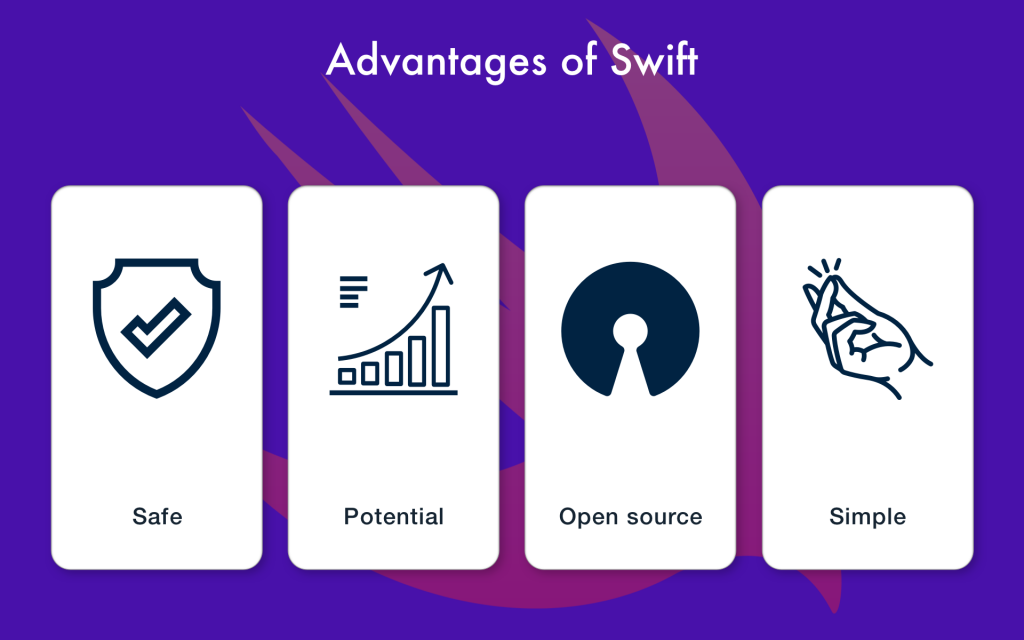 You should know what pitfalls Swift has, and what negative sides you may face if you plan to start using Swift as the primary tool for building your apps.

A limited number of developers. This disadvantage may become a benefit for you if you want to be a Swift developer. Not so many developers today are good at Swift yet, and you may become one of them.

Lack of native libs. Almost all Swift libraries don’t work with different versions of Swift. And it is not convenient.

Unstable language. If you want your project to be migrated to a newer version of Swift, you need to rewrite the code. And it is a real problem. But Swift Migration Tool for Xcode now helps solve this issue.

Python or Swift? Make your choice

When you know all the pros and cons of Python and Swift, you may choose the language that is more acceptable for you. However, let’s see the main common particularities and differences.

Typical particularities between Swift and Python

First, Python and Swift are both simple, have clear syntax. Both of them have a RELP environment that helps find bugs in code and fix them. They are multi-paradigm. Also, there are Python IDLE  and The Playground for Swift – tools that simplify the learning process of Swift. 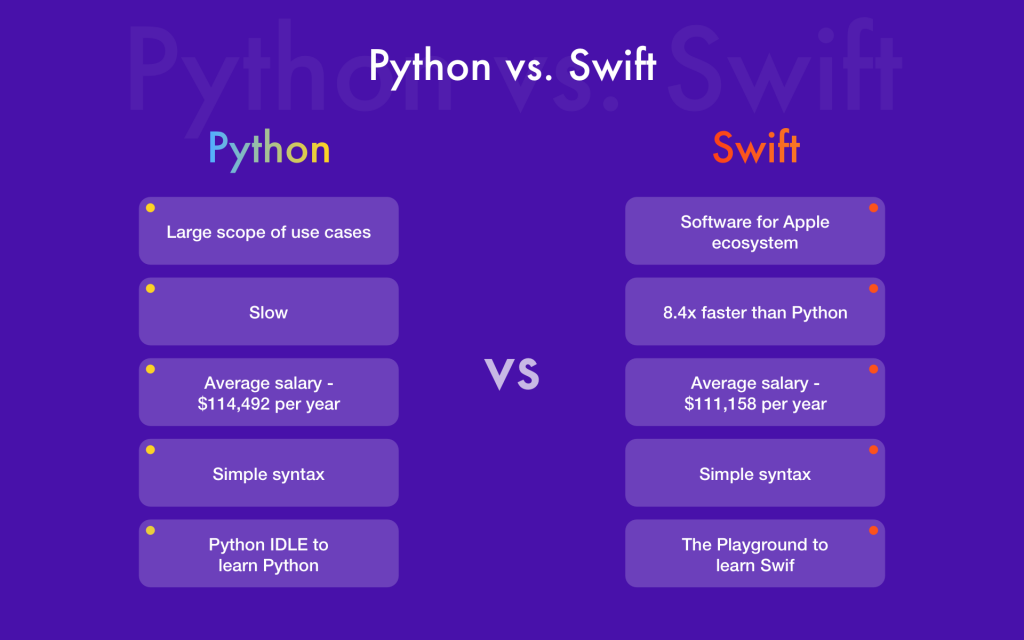 Swift is oriented on mobile apps for Apple. Python is used for back-end development predominantly. And Swift is a faster language than Python. According to Apple, Swift is 8,4x faster in comparison with Python.

We hope this article helped you make the right choice. These languages are both excellent, and they are just can be used for different purposes, that’s it. We wish you always follow the right road!

Sergey Lypchenko is a technical writer at Cleveroad. It is a web and mobile app development company located in Eastern Europe. Their main goal is to develop first-rate and competitive software for our customers. His mission is to provide people with interesting material about innovations in the world of IT.