Data Cleaning4
The Data Science profession, while often misunderstood (even by the field itself — a topic for another post possibly), was famously...

The Data Science profession, while often misunderstood (even by the field itself — a topic for another post possibly), was famously labeled the “sexiest job of the 21st century” by the Harvard Business Review in October 2012. Since that time, businesses, education providers, and potential talent have all been jumping over themselves to cash in on the gravy train. I mean, with terms like Artificial Intelligence (AI), Machine Learning (ML), Predictive Modelling, Neural Networks, who wouldn’t get excited right?! What the glossy brochures won’t tell you about data science is that the fabled Data Scientist will spend hours upon hours doing the very unsexy task of… wait for it… data cleaning.

Data cleaning doesn’t involve a literal wash ‘n vac, but the mundane process of tidying up data that has either been identified to be wrong (“dirty data”), or missing. Rather than moan about data cleaning and try to convince you with words alone, we’ll work with an example from the NFL Big Data Bowl currently being run on Kaggle. The competition challenges competitors to build a model that can best predict “How many yards will an NFL player gain after receiving a handoff?”

The data that we will use for data cleaning was provided by Next Gen Stats and contains tracking data for running plays. Each row in the dataset corresponds to a single player’s involvement in the play, so one play will have 22 records (11 players per team). There are 509,762 rows and 49 variables (columns), ranging from each player’s position, speed, acceleration, height, and weight, to stadium details, weather details, formations, and game details.

So once the Data Scientist has collected the data (this example isn’t all that representative as we were handed the data), the first step would be to usually perform what’s know as EDA — Exploratory Data Analysis — to uncover certain patterns/relationships/quirks in the data. To perform the exploration and cleaning, packages from the tidyverse ecosystem will be used extensively. Packages such as the following will be used:

In this post, we will focus our attention on cleaning up the categorical variables in the dataset. Dealing with missing values is another key piece of work for any Data Scientist, but we will park that for now until a later post.

To select only categorical variables, the select_if() function makes things really easy. To inspect what we have, glimpse() provides arguably a more appealing output the str().

This post will limit itself to these three variables.

This post will only cover the cleaning of a few of the categorical features — going through all of the variables in this blog post may be a bit much to stomach for you the reader!

The first variable we’ll clean is the PlayerHeight variable. As a feature in a predictive model, we may find height as a categorical variable increases the complexity (hot-encoding, etc). 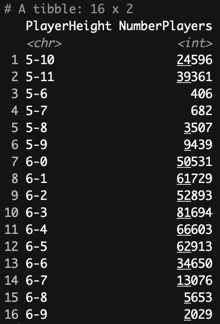 As a result, we can convert the height currently displayed as feet-inches to inches, and then plot the continuous variable in a histogram:

I am a data scientist working for a transformative worldwide distributor of plumbing, waterworks, and HVAC-R products. My passion lies in telling stories through data and focusing on data visualization to bring those stories to life. In my spare time, I love performing analyses on various sporting questions that pop in my head. You can find these at my blog www.dontblamethedata.com.