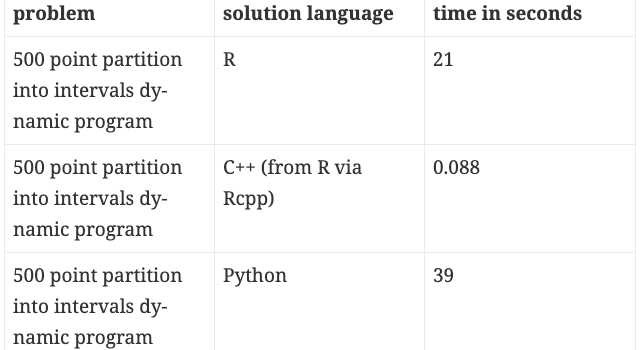 Timing the Same Algorithm in R, Python, and C++

C++2 Python23 R34
While developing the RcppDynProg R package I took a little extra time to port the core algorithm from C++ to both R and Python. This means I can time...

While developing the RcppDynProg R package I took a little extra time to port the core algorithm from C++ to both R and Python.

This means I can time the exact same algorithm implemented nearly identically in each of these three languages. So I can extract some comparative “apples to apples” timings. Please read on for a summary of the results.

The algorithm in question is the general dynamic programming solution to the “minimum cost partition into intervals” problem. As coded in C++ it uses one-time allocation of large tables and then for-loops and index chasing to fill in the dynamic programming table solution. The C++ code is given here.

I then directly transliterated (or line-for-line translated) this code into R (code here) and Python (code here). Both of these implementations are very direct translations of the C++ solution, so they are possibly not what somebody starting in R or Python would design. So really we are coding in an an imperative C style in R and Python. To emphasize the shallowness of the port I deliberately left the semi-colons from the C++ in the R port. The Python can be taken to be equally “un-Pythonic” (for example, we are using for loops and not list comprehensions).

That being said we now have very similar code to compare in all three languages. We can summarize the timings (details here and here) as follows. 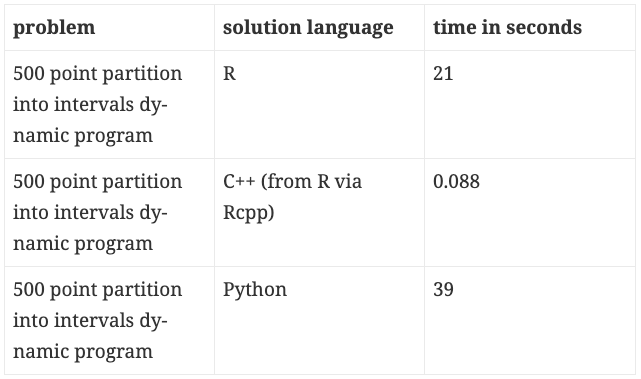 Notice for this example C++ is 240 times faster than R, and R is almost twice as fast as Python

Neither R nor Python is optimized for the type of index-chasing this dynamic programming solution depends on. So we also took a look at a simpler problem: computing the PRESS statistic, which is easy to vectorize (the preferred way of writing efficient code in R and Python). When we compare all three languages on this problem we see the following. 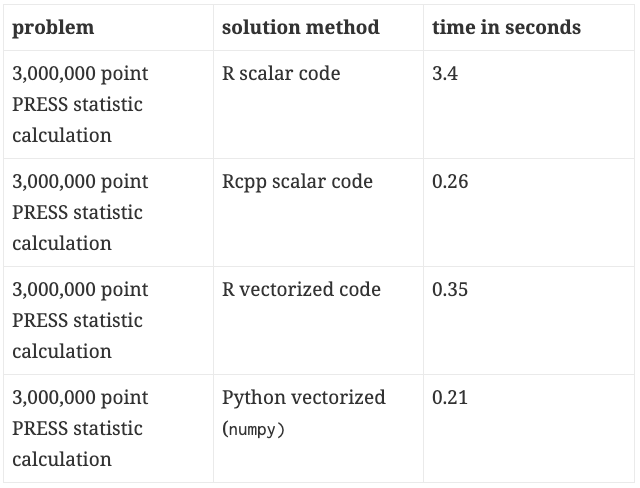 The timing details can be found here and here.

Obviously different code (and per-language tuning and optimization) will give different results. But the above is consistent with our general experience with R, Python, and C++ in production.

In conclusion: R and Python are in fact much slower than C++ for direct scalar manipulation (single values, indexes, and pointers). However, R and Python are effective glue languages that can be fast when they are orchestrating operations over higher level abstractions (vectors, databases, data frames, Spark, Tensorflow, or Keras).

This article was originally posted here.