Understanding Gradient descent is important because it’s the most commonly used optimization method deployed in machine learning and deep learning algorithms. It’s used to train a machine learning model and is based on a convex function.

Through an iterative process, gradient descent refines a set of parameters through use of partial differential equations, or PDEs. It does this to minimize a given cost function to its local minimum. Gradient descent was invented by French mathematician Louis Augustin Cauchy in 1847.

Most machine learning and deep learning algorithms involve some sort of optimization. Optimization refers to the process of either minimizing or maximizing some function by altering its parameters.

The process of changing the parameter values involves differential Calculus, specifically calculating the “derivative” of the cost function. The derivative gives the slope of the function at a specific point. In other words, it specifies how to scale a small change in the input to obtain the corresponding change in the output. The derivative is therefore useful for minimizing the cost function because it tells us how to change the parameters in order to make a small improvement in finding the function’s minimum. 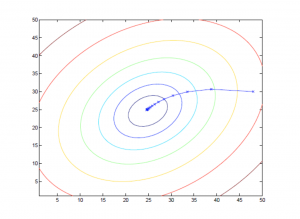 Credit: Stanford CS229 Course Notes. Trajectory for gradient descent is like climbing down into a valley

There are three primary types of gradient descent used in modern machine learning and deep learning algorithms. The main reason for these variations is computational efficiency. A data set may have millions or even billions of data points, and calculating the gradient over the entire data set can be computationally expensive.

Batch Gradient Descent is the most straightforward type. It calculates the error for each example within the training set. After it evaluates all training examples, it updates the model parameters. This process is often referred to as a training epoch. Advantages of batch gradient descent are that it’s computationally efficient and produces a stable error gradient and a stable convergence. One disadvantage is that the stable error gradient can sometimes result in a state of convergence that isn’t the best the model can achieve. It also requires that the entire training set resides in memory and is available to the algorithm.

This article should give you the basic motivation for the gradient descent process in machine learning. Moving forward, in order to understand the mathematical foundations of gradient descent, I strongly recommend the Stanford CS229: Machine learning course notes by Andrew Ng, and Ron Dror.