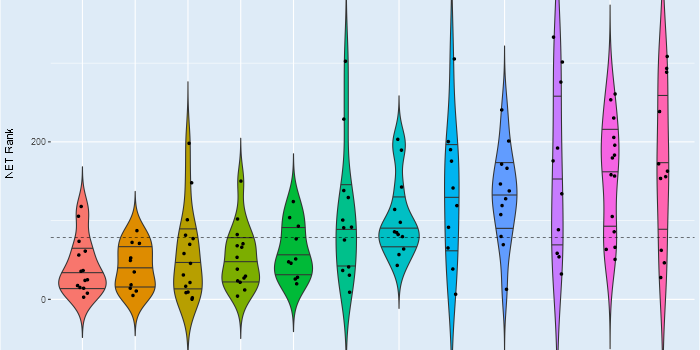 Which Conference is Best? — College Hoops, Net Rankings and Python

Python23 Sports3
For college basketball junkies like me, the season is now shifting into high gear as teams begin serious conference play. At...

For college basketball junkies like me, the season is now shifting into high gear as teams begin serious conference play. At the end of the regular season and conference tournaments, 66 D1 teams — 32 league champions and 34 at large — will receive invitations to March’s national championship tournament.

A year ago, I posted a blog on evaluating the individual sport performance of college athletic conferences. Such an assessment is critical to help determine which at large teams should be invited to championship tournaments.

This year, the NCAA has introduced a new rankings system called NET to inform team rankings as a progression/replacement for the RPI I wrote on earlier. NET “relies on game results, strength of schedule, game location, scoring margin, net offensive and defensive efficiency, and the quality of wins and losses.”

The remainder of this blog uses NET rankings to examine current 2018-2019 D1 conference performance in men’s basketball. For the analysis that follows, technology deployed is JupyterLab 0.32.1, Anaconda Python 3.6.5, and Microsoft R Open R-3.4.4. Of special interest is the demonstration of “RMagic” that interoperates R and its ggplot package within the Python notebook. My take is that the R/Python interoperability is a godsend for analytics programmers.

The data are first scraped from the NET website using the Python requests library, then “liberated” from HTML using BeautifulSoup functionality. The resulting lists are subsequently wrangled using core Python, numpy, and Pandas. In the end, Pandas dataframes are passed to R for a ggplot graph.

Include a personal directory in the Python library search path.

Define functions to handle HTTP get requests. The code below was shamelessly “borrowed”. My gratitude to the author.

Read the NET raw HTML and “soupify” to text.

Examine the soup text to identify “tags” that enclose data of interest. In this case the lowest level relevant tags are ‘figure’, ‘th’, and ‘td’.

Assemble the date, variable name, and the table data from the “souped” query results into “clean” Python lists.

Reshape the scraped table data into a numpy array.

Copy that array into a Pandas dataframe and change the data types of two resulting attributes.

From the resulting dataframe, tally the frequencies of “conference” in descending frequency order.

Define a function that produces a score to rank conference performance — lower is better. Use the Pandas “groupby-apply” split-apply-combine functionality.

Compute the conference rankings and then join them to the team dataframe. Build another dataframe to pass parameters to the next-step R ggplot visualizations. Make R versions of these dataframes.

Pass the R dataframes to ggplot for graphing. At this time, the Big Ten, Big 12, ACC, and SEC are my top conferences.

Finally, list rankings of schools in the top three conferences.

That’s it for now. Happy New Year to ODSC readers!

Steve is a data scientist focusing on research methods, data integration, statistics/ML, and computational analytics in R/python. Follow him on LinkedIn: https://www.linkedin.com/in/steve-miller-58ab881/